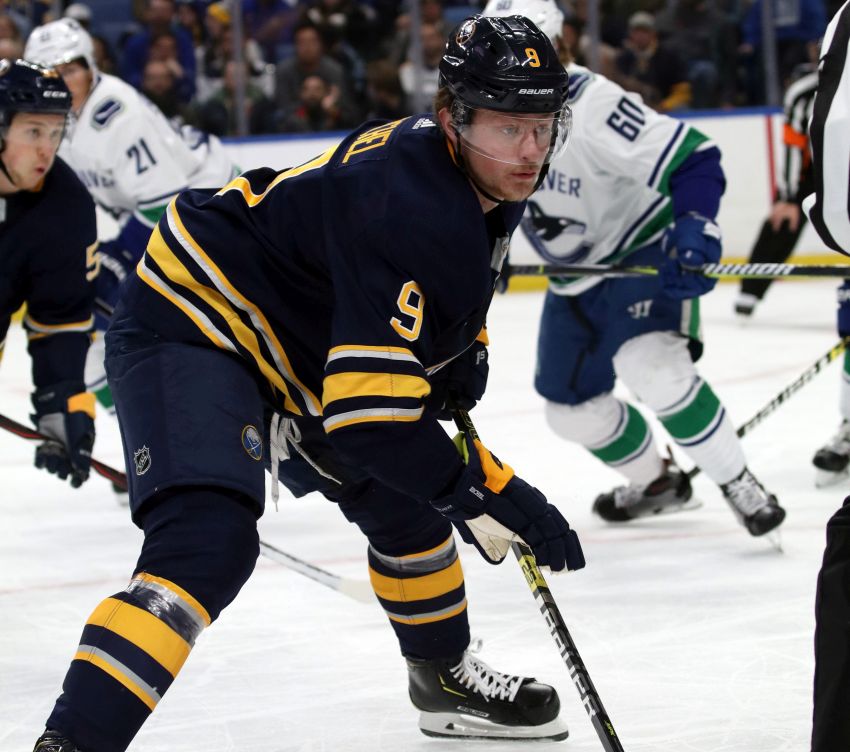 Jack Eichel will return from his suspension against Carolina. ©2019, Janet Schultz

BUFFALO – Having completed his two-game suspension, leading scorer Jack Eichel will return for tonight’s road contest against the Carolina Hurricanes. So maybe, just maybe, the hapless Sabres can end their embarrassing goal drought.

Forget about the Sabres’ six-game losing streak. At this point, simply scoring a goal – they’ve been shut out three straight games – would be a huge moral victory.

Incredibly, the Sabres haven’t scored in 197:40, a shocking stretch of futility that ranks among the lowest points in franchise history.

“We need a goal,” Sabres coach Phil Housley said Friday inside KeyBank Center. “We’d like to get a result with that, too.”

The Sabres haven’t scored since March 7, when winger Kyle Okposo’s goal 7:20 into the third period briefly put them up in their 5-4 shootout loss to the Chicago Blackhawks.

“A lot of teams have similar droughts like that,” Sabres defenseman Zach Bogosian said. “They get a lucky bounce, then all of a sudden it’s you go back to normal.”

If the Sabres don’t score tonight, they’ll make some dubious history, becoming the first club since the 1967-68 Oakland Seals – an expansion team three months into its existence – to be shut out in four straight games.

The Seals played four road games and even managed a scoreless tie during their drought. The Sabres have been blanked twice at home this week.

The Sabres endured a similar streak last season, getting shut out in three straight games before their goalless stretch mercifully ended at 232:09.

That marked the first time in franchise history they had gone three consecutive contests games without scoring. Now it has happened twice in 16 months.

This year’s drought seemingly came out of nowhere. The Sabres have showcased their most potent offense in seven years, scoring 190 goals. They seemed like a lock to crack the 200-goal barrier for the first time since 2011-12, when they scored 211 times.

In the seven games prior to the drought, the Sabres scored 23 goals and pumped 252 shots on net, an average of 3.3 and 36 a contest.

Eichel’s presence could ignite the Sabres. The slick center, 22, has been their offensive catalyst all season, compiling 26 goals and 72 points in 65 games.

“He’s our leader and he drives the bus,” Housley said.

Still, in the captain’s last outing a week ago, the Sabres mustered only nine shots in the opening 50 minutes or so. The brutal 3-0 loss to the Colorado Avalanche ranks as one of their worst offensive performances in recent memory.

Eichel earned his two-game ban that afternoon for his illegal check to Carl Soderberg’s head.

Goals aren’t exactly hard to come by this season. Entering Friday, games had averaged 6.06 goals, the highest number since 2005-06.

“We’re still, at times, turning away opportunities to get pucks to the net,” Housley said. “I think we just to really simplify our game and throw everything to net. We got to get people going there and getting dirty and hungry to score a goal.”

Housley, of course, was essentially repeating what he and his players said following Thursday’s awful 5-0 loss to the Pittsburgh Penguins.

The Sabres constantly talk about paying a price to score, yet when the game starts, they don’t get to the net enough.

“They’re not going in right now, so when that happens, you just got to kind of dumb it down, get to the net and hope for some bounces off legs or skates,” Sabres center Evan Rodrigues said. “Just create havoc.”

“For some guys, it’s been a while,” Eichel said. “I think it’s just human nature that it starts to creep into your mind a bit and maybe you’re gripping your stick a little tight and you’re thinking about it. Just keep it simple, try to get pucks to the net, try to get bodies there. It’s bound to go in.”

Bogosian practiced Friday inside HarborCenter after an upper-body injury sidelined him against Pittsburgh.

Meanwhile, defenseman Marco Scandella missed Friday’s session and is day-to-day with an upper-body injury. Housley said he would travel with the team.

Sabres forwards Vladimir Sobotka and Scott Wilson skated an extras, meaning they could be scratched Saturday. Zemgus Girgensons would move in after sitting out two games as a healthy scratch.