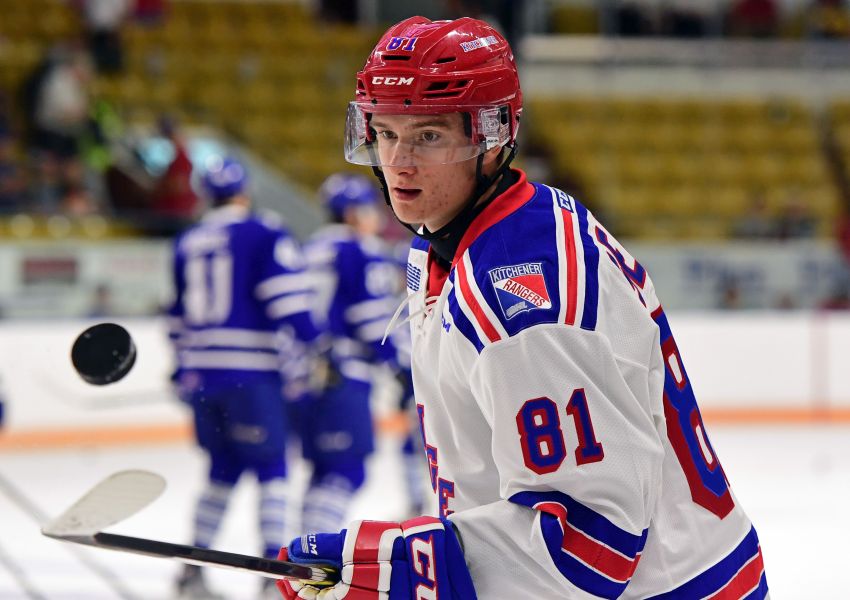 CHICAGO – Instead of coming here Saturday and watching the final six rounds with other NHL Draft prospects, Dylan Seitz said he plans to “stay comfortable” at home in Eden, N.Y.

“I’m probably not even going to watch it,” he told the Times Herald by phone Sunday. “I’ll probably go do something and hopefully I’ll get a call.”

Fresh off a solid rookie season with the Ontario Hockey League’s Kitchener Rangers, Seitz could be a late-round pick. What makes the 6-foot-2, 185-pound forward attractive to NHL teams?

“He plays the way a coach would want every player to play,” Rangers coach Jay McKee said. “He plays with that physical edge. He competes not only in games but in practice and he’s a guy that leaves everything on the ice and works his tail off.

“He’ll kind of do anything asked. He’ll kind of spark the team up with some energy. … He’s also able to score timely goals or set up some nice plays. He’s kind of an all-around player.”

“Whatever they needed me to do, I did it, no questions asked,” he said.

Naturally, Seitz grew up rooting for the Sabres, so playing for McKee is special. As a child, Seitz had a poster of the popular former Buffalo defenseman he remembers “blocking shots every game.”

“Maybe I would’ve given him more ice time if he told me,” McKee joked about the poster.

Kidding aside, McKee awarded Seitz with ice time as he developed a detailed game and a better understanding of structure.

“Early on, a young guy, I think he was just trying too many hope plays, just kind of chasing the puck around, not really focusing on the structure within the game,” McKee said. “As the season went on, he got more responsible, was making better plays with the puck. I think he really grew. His hockey IQ grew as the season went on.”

By the end, Seitz’s confidence had ballooned.

“I didn’t really have a lot of confidence going in,” said Seitz, who finished with eight goals and 18 points in 60 games. “I was really down on myself. I learned from my coaches not every shift is going to be your best shift. You just got to forget about it. I learned a lot of things like how to control my emotions, and that really helped me a lot.”

Seitz, a product of the Buffalo Jr. Sabres, spent most of his senior year attending high school in Kitchener. Eden High School transferred his credits, so he finished at home and graduated Thursday. He plans to take some online classes from the University at Buffalo next season.

Seitz, who said he has talked to a “decent amount” of NHL teams, including the Sabres, would join a slew of Buffalo-area draftees in recent years. Justin Bailey, Sean Malone, Dennis Gilbert, Joe Cecconi and Austin Osmanski have all been selected since 2013.

“When the day gets here, I’m sure it’s going to be exciting, and I really can’t wait for it,” Seitz said.