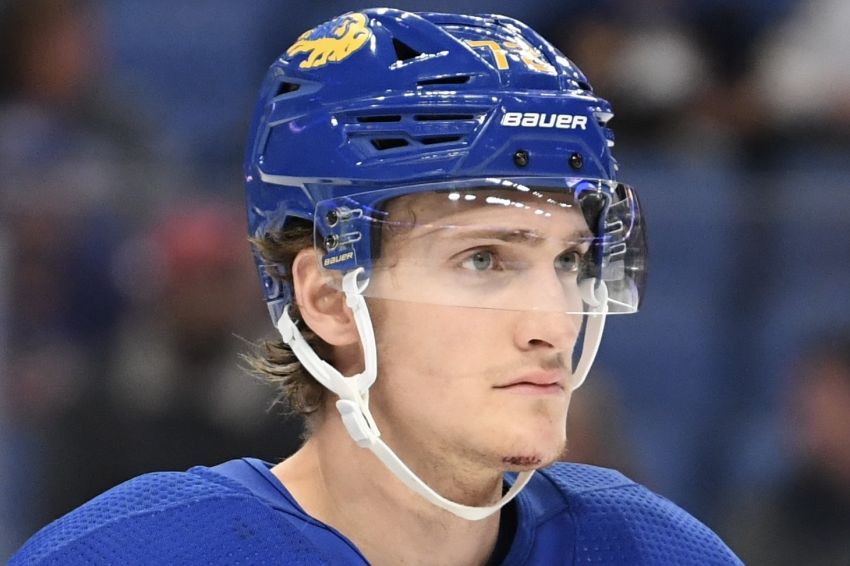 Tage Thompson has performed like a future star this season. ©2022, Micheline Veluvolu

TORONTO – Brent Thompson remembers his son, Tage, was beside himself that day almost eight years ago during their five-hour ride home to Long Island.

Tage Thompson, who has emerged as the Buffalo Sabres’ most lethal goal scorer this season, had just been cut from one of USA Hockey’s regional camps, and he left Syracuse angry and shocked.

If Thompson had advanced and earned one of 200 spots for the national camp at the Northtown Center in Amherst, he would’ve been in contention for a coveted place in the U.S. National Team Development Program.

Instead, a dejected Thompson was heading home trying to figure out what the heck went wrong.

“I remember driving home and talking, he was upset,” Brent Thompson told the Times Herald. “I said, ‘The only way you can respond to it is you can work out harder, you can train harder and shove it up everyone’s (expletive). You can go two ways.’”

Tage Thompson, of course, responded to the challenge. Today, the center is the Sabres’ leading goal scorer, having tallied a career-high 22 times during a breakout season. He has scored six goals in his last six outings entering tonight’s game against the Toronto Maple Leafs at Scotiabank Arena.

Some of the adversity Thompson endured during his teenage years – he injured his MCL, PCL and broke his leg on one play in 2012 – was just a harbinger for what he has dealt with as a pro.

In 2018-19, Thompson struggled to produce with the Sabres before they demoted him late in the season. Two years ago, he suffered a season-ending shoulder injury in his first game following a recall. Having been acquired in the Ryan O’Reilly trade, he has experienced the pressure that accompanies being a big piece in a major deal.

A year ago, before Sabres coach Don Granato converted him to center, he was often a healthy scratch under ex-coach Ralph Krueger.

“You have a lot of those things over the course of your career where you’re gonna either be cut or told you’re not good enough, and I think it just makes you better,” Thompson said in January.

So it’s not surprising to hear that when Thompson returned home from Syracuse, “he trained like an animal,” according to his father. He started skating more often and doing additional skill work.

“Tage was passionate about hockey, so every time his father drove him and pushed him he’s never going to quit,” said Granato, who was coaching the NTDP’s Under-18 squad in 2014.

Brent Thompson said he asked Tage then if he had done enough to join the NTDP.

“And (he replied), ‘Probably not,’” he said. “Then he was upset about the whole thing. It was a chance for him to show people when I get my next opportunity, I’ll be ready, as he did.”

Looking back, the 6-foot-7 Thompson said the experience of being cut “built a fire inside” him.

“It leaves you with that mentality that you’re never satisfied and even when you do make it, you still have more to give,” Thompson said. “I think that was the first real test, I guess, for me.”

As luck would have it, some alternate spots materialized, and Tage Thompson attended the national camp weeks later. He arrived in Amherst hellbent on making an impact.

“I remember being pretty mad that I was cut and just wanted to prove people wrong,” said Thompson, who hadn’t made the under-17 squad a year earlier.

When camp began, Thompson’s talents wowed Granato. He immediately chose him for the under-18 team.

“I remember the first day I went to the camp there was 200 kids and I watched 12 teams,” Granato said in January. “Our scouts weren’t even in yet and I was sitting with my assistant coach, I said, ‘We can tell our scouts to stay home because we’re taking Troy Terry and we’re taking Tage Thompson. I’ve already decided.’”

Terry, 24, has scored 27 goals for the Anaheim Ducks this season.

When Granato watched Thompson, then about 6-foot-2, he saw the potential the youngster possessed.

Naturally, learning he would be joining the NTDP in Michigan was satisfying for Thompson. But playing on an elite junior team – it also featured Auston Matthews and Matthew Tkachuk, for example – that had been together for a year wasn’t easy.

“He’s coming in and all those players … had a year of training together,” Granato said. “They were able to train with the best other kids in the United States or the world at that time every day for 120 practices. And then you bring Troy Terry and Tage Thompson in and they didn’t have those 120 practices.”

Still, Thompson kept maturing. After one season with Granato, he left for UConn – he graduated from high school a year early – and spent two years with the Huskies.

In 2016, the St. Louis Blues drafted Thompson 26th overall. This season, he’s on pace to surpass the 30-goal mark.

“I do see there’s more, especially … when he does get stronger, because I know he will and I know how hard he trains,” Brent Thompson said. “His game will go to another level.”