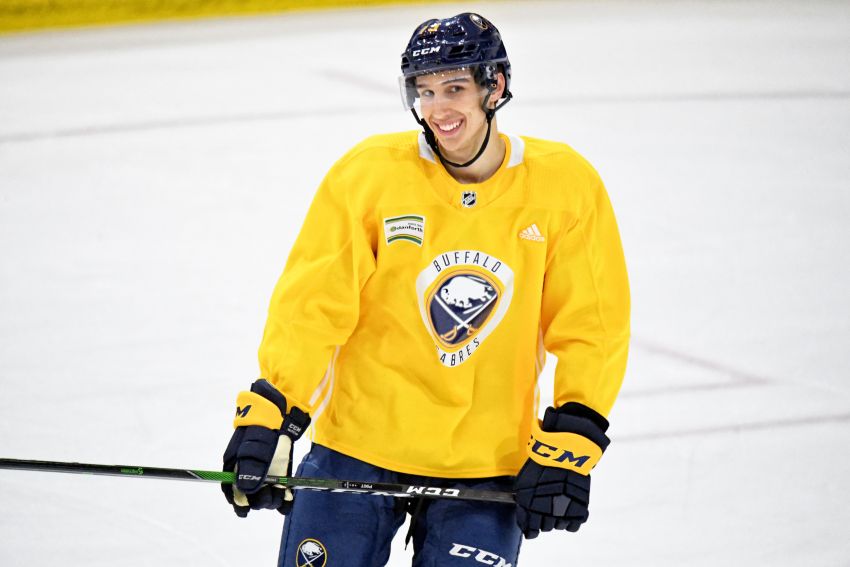 Dylan Cozens has spent a year and a half in Buffalo’s organization. ©2021, Micheline Veluvolu, Rochester Americans

Over the last two months – through Hockey Canada’s selection camp, a 14-day quarantine, the heartbreak of losing a gold medal and now in Buffalo – Sabres prospects Dylan Cozens and Jack Quinn have grown close.

Shortly after Canada fell to Team USA in Tuesday’s World Junior Championship final, Cozens and Quinn boarded a private plane in Edmonton and flew to Buffalo, where they quarantined for two days before joining training camp Friday at KeyBank Center.

The 19-year-olds skated in the second practice session with AHL players and will play in tonight’s intrasquad scrimmage.

Quinn said: “(I’m) definitely fortunate to be able to be in Buffalo with him.”

Cozens and Quinn, given their statuses as first-round picks and top prospects, could become franchise cornerstones someday and be teammates for a long time.

But they must wow the Sabres before Thursday’s season opener to stick around this season. While the last two months have been a dizzying experience for them – “A bit of a roller coaster,” Quinn said of the emotions – they have a huge advantage in that they’ve been playing high-level games for weeks.

Cozens, the seventh overall pick in 2019, just established himself as a star for Canada, scoring a tournament-high eight goals and 16 points in seven games.

The 6-foot-3, 188-pound center has a legitimate chance to crack Buffalo’s lineup.

“I’m very confident in my game right now coming off of World Juniors,” Cozens said. “I think it was big for me to get into game shape and be at the top of my game coming into camp here.”

Cozens, who’s seven months older than Quinn, has spent and a year in a half in the organization and participated in a regular NHL camp last season.

“Dylan, quite clearly, has an advantage having had camp with us last year, having been in contact with our player development personnel for more than a year now, a year and a half,” Sabres coach Ralph Krueger said. “Dylan is way ahead when it comes to information. Jack, just recently drafted and he hasn’t been in our hands as yet, so we will be spending more time with him.”

Cozens said the nerves he felt at camp last season have disappeared.

“I didn’t really know anyone here yet,” he said. “Now, since I got to know the guys last year, I’m definitely more comfortable coming in here, more confident. This year, I truly want to show that I can play at this level.”

He added: “My mindset right now is to make Buffalo.”

To play in the NHL, Cozens learned he had to become stronger. In the World Juniors, he quickly reaped the benefits from his offseason training.

“I’ve noticed it a lot out there at World Juniors, just my strength and being able to win puck battles, being able to take the puck to the net and just fight guys off of the puck,” Cozens said. “I think it’s a big jump in where my game went from last year and I think it’s definitely gonna be a huge part in helping me make the jump to the NHL.”

Meanwhile, the odds are stacked against the 6-foot, 176-pound Quinn, a winger the Sabres picked eighth overall in October, making the NHL this season.

Right now, they have a surfeit of forwards.

Still, the Sabres have interesting options for Cozens and Quinn. They can each play seven NHL games before their entry-level contract kicks in. The league has also instituted a four- to six-man taxi squad this season because of the COVID-19 pandemic.

The Sabres could also shift Cozens to the wing, a less demanding position.

“I’m very comfortable on the wing,” Cozens said. “Throughout my junior career, I’ve played center and wing. I kind of eased into the WHL as a winger.”

In a normal season, Cozens and Quinn would have to play in the NHL or their respective junior leagues because they’re too young for the AHL. But it’s unclear if the Western Hockey League or Ontario Hockey League will be able to play this season.

There have been reports junior-age players would be free to play in the AHL if those leagues can’t get started.

The challenge of competing against men could boost Quinn’s development. He scored 52 goals in 62 games for the Ottawa 67s last season. Playing for the Rochester Americans might offer him a better opportunity.

“No one knows what’s going to happen, including me,” said Quinn, who recorded one goals and five points at the World Juniors. “So I think just for myself, I’m not looking too far ahead, I’m just trying to be in the present. I’m in Buffalo now, so I’m just trying to make the most of it every day.”