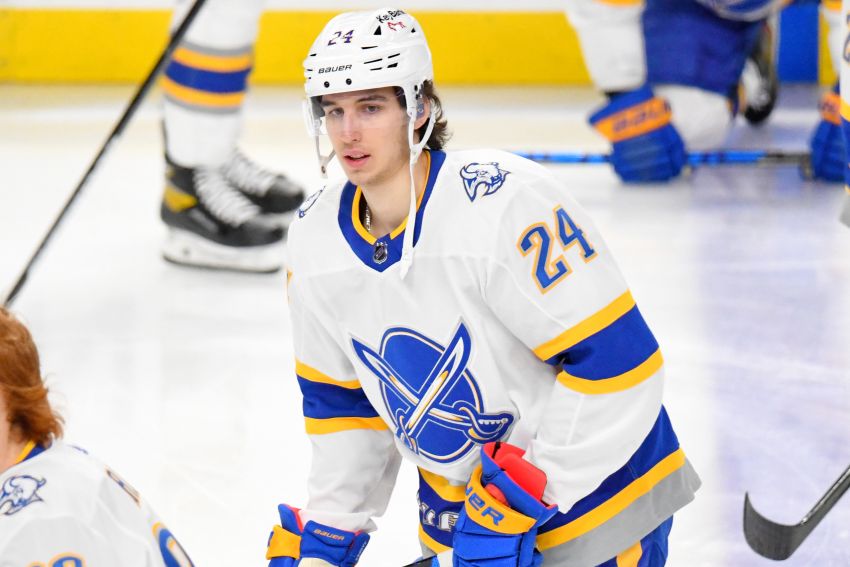 Dylan Cozens had been looking for a fight. ©2021, Micheline Veluvolu

As Buffalo Sabres rookie Dylan Cozens battled Ryan Lindgren around the New York Rangers net early in the third period, he knew it was time.

A few games ago, Cozens said he decided he wanted to fight. The winger just needed to pick the right spot.

So when the Rangers defenseman asked him to scrap Tuesday, he happily obliged, dropping the gloves for the first time in his 15-game NHL career.

“We were down a goal in the third and I just wanted to spark the boys a bit,” Cozens said on a Zoom call following the Sabres’ 3-2 loss at Madison Square Garden.

After a few listless performances, Cozens’ fight at 7:11 provided a spark the Sabres sorely needed.

“That was probably the most fired up we’ve been all season,” winger Kyle Okposo said.

After Sunday afternoon’s 3-0 loss to the Philadelphia Flyers, an embarrassed Rasmus Dahlin said the Sabres needed a fight or a display of passion to ignite them. Coach Ralph Krueger and captain Jack Eichel agreed.

Well, on Tuesday, Cozens, who was scratched Sunday, provided one.

“Boy, is Dylan Cozens ever on the map, the future map of the Sabres,” Krueger said. “How exciting is that to see that kind of bite and fight? We’re talking about getting ourselves back into the type of game we want to see and there you’ve got a Dylan Cozens stepping up. You can see the natural leader that he is in this moment where he takes it upon himself and not only goes and fights but wins his first National Hockey League fight decisively.

“It was really a moment of respect for him as a player but above all, you can see the light of leadership that he spreads out among the people he touches. A … highlight in a game with a disappointing final result.”

Okposo said Cozens, the seventh overall pick in 2019, has “got that old-school hockey in him.”

“He plays the game the right way, he’s solid defensively,” Okposo said. “(He’s) going to go through ups and down through his rookie season, but for the most part, he’s been great and the sky’s the limit for him.

“The bench reaction was awesome. All of us couldn’t be happier that he went out there and did that.”

Krueger said for the first time since the Sabres’ COVID-19 pause a month ago, Tuesday’s game featured “the compete level and the battle level that we’re expecting from each other.”

Of course, Krueger acknowledged “it has taken us too long.”

“It was a challenging situation for us to evolve back to the game that we needed to play,” he said.

Alexis Lafreniere and Chris Kreider put the Rangers up 3-1 before Tobias Rieder got the Sabres within one in the second period.

“Unfortunate that we didn’t get rewarded,” Okposo said of the Sabres’ effort, “but I think that we did the right things tonight.”