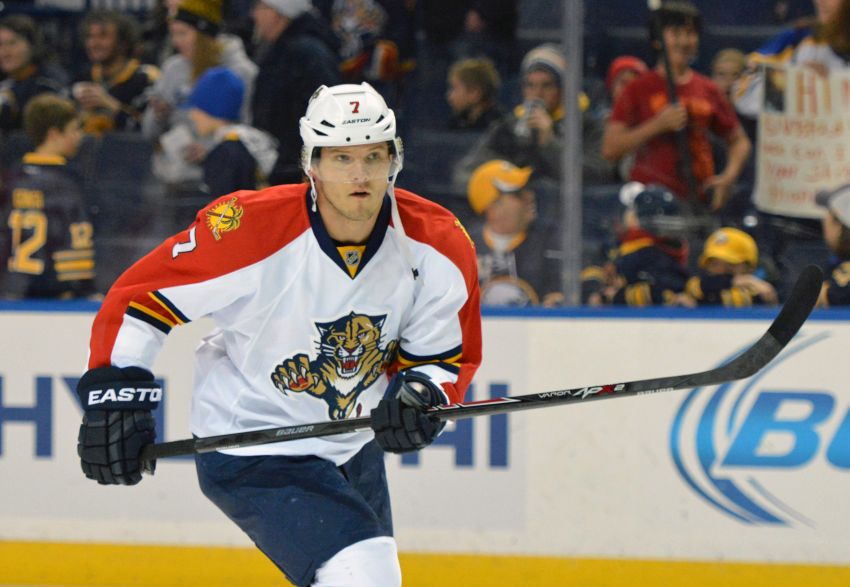 While the Panthers lost to the lower-seeded New York Islanders in six games, Kulikov’s performance wowed them. In critical tilts, the Russian thrived playing a No. 1 shutdown role against the Isles’ top talent.

Those outings helped convince the Sabres they needed to pursue the Russian, who believes he found something extra in himself to “push forward” with the additional responsibility.

“I felt like I had a really, really strong playoffs,” said Kulikov, who was acquired by the Sabres on Saturday. “I think I was one of the top defensemen in Florida.”

That’s probably why Kulikov, who has one year and $4.3 million left on his contract, figured he was still in the upstart Panthers’ plans.

“I was comfortable in Florida,” said Kulikov, the 14th overall pick in 2009. “I didn’t think something like that was going to go down.”

When the Panthers acquired Keith Yandle’s rights last week, Kulikov was initially excited the team had an offensive defenseman in its arsenal.

Spending seven years with one team feels “like you’re on an island,” Kulikov said Tuesday on a conference call.

“You know one thing,” he said. “Every other organization is kind of unknown.”

So naturally, Kulikov felt a mix of excitement and nervousness after the Sabres acquired him for defenseman Mark Pysyk and draft picks.

To Kulikov, there’s no disappointment in leaving the Panthers, who won the Atlantic Division last season, just as they appear poised to become a perennial contender. He wasn’t sure why the Panthers dished him. He believes the Panthers wanted to clear salary cap space. He never had any contract talks.

“Looking at Buffalo, playing against them, (they have) a really strong group of forwards that’s hard to play against and have a lot of skill,” Kulikov said. “If I can help out the defensive corps any way I can and get the puck up to the forwards … I think we’re going to have a very successful year.”

The Sabres believe Kulikov will have a large part of any success they enjoy next season. They coveted a left-handed defenseman – they now have three lefties and three righties – with Kulikov’s array of talents.

Coach Dan Bylsma and general manager Tim Murray expect him to skate on the first or second pair. Zach Bogosian and Rasmus Ristolainen could potentially be his partners.

Kulikov said he’s open to any role. He hasn’t spoken to Bylsma or Murray yet.

“(A) top-four defenseman is very prestigious,” Kulikov said. “I’m happy to be that guy and I’m happy to take over that responsibility. As I’ve proven in Florida, I’ve played against top lines. In the last few years I’ve improved a lot on my own end. Statistics show the last two seasons were really strong for me.”

Still, while Kulikov had a 28-point season in 2011-12, his offensive production is usually low. He compiled one goal and 17 points in 74 games last season. Murray mentioned Saturday that Kulikov has growth potential offensively.

“I haven’t really been as productive as they wanted in the NHL,” Kulikov said. “Obviously, I want to grow in that part of the game.”

The 6-foot-1, 204-pound Kulikov said his physicality has increased over the years. He always possessed an edge, but as he became more comfortable in the NHL, he started to showcase it more regularly.