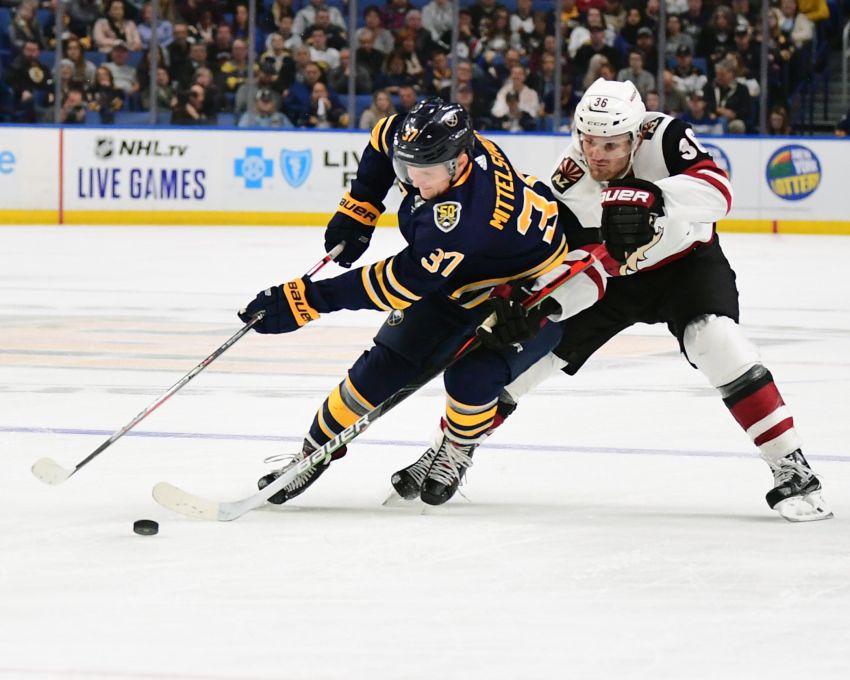 When winger Jeff Skinner made 2-0 later in the first period, it seemed like the Sabres could cruise to their sixth straight home win to open the season.

But the Sabres, the NHL’s biggest early-season surprise, have an alarming penchant for squandering two-goals leads.

It happened Monday for the fourth time in the last 10 outings. By late in the second period, the Coyotes had tied the game and seized full control.

“We were actually pleased to get that to overtime,” Sabres coach Ralph Krueger said.

In overtime, the Sabres couldn’t muster a shot on goal, yet they hit two posts before center Casey Mittelstadt missed convert a bouncing puck for the winner.

“I’ve got to put one of those in,” Mittelstadt said.

Then Coyotes center Nick Schmaltz scored the shootout’s only goal.

Despite Monday’s loss, the upstart Sabres completed one of their best Octobers in a long time. At 9-2-2, they earned an NHL-high 20 points, falling one short of the franchise record for an opening month they set in October 2006.

For a franchise that owns an NHL-long eight-year playoff drought and annually ranks among the league’s laughingstocks, the month was significant.

The Sabres became the final team to lose a home game this season (5-0-1).

If they can sustain their success, remember Krueger’s first month as the turning point.

Now, the Sabres have a well-deserved break after playing 13 games in 26 days. They don’t play again until Friday in Washington. They have today off and will practice Wednesday and Thursday.

The Sabres’ two-game trip to Sweden next week has condensed their schedule, creating a heavier October.

“It’s been quite a month, quite a pace,” Krueger said. “Overall, when we take a deep breath tomorrow and look at the month, we’re going to be pleased at what’s happened here.

“Then we got … two days of practice in a row, yahoo. That’s very rare for coaches to have that opportunity.”

The Sabres have plenty to clean up. They’ve been outshot 170-96 in the third period this season, including 15-9 on Monday.

Sabres goalie Carter Hutton, meanwhile, stopped 42 shots. But he allowed a weak goal to winger Conor Garland late in the first period, helping the Coyotes to get back in it.

“Hutts made some huge saves for us in the third period and kept us in it,” Eichel said. “We get a point.”

The Sabres have already allowed 40 or more shots five times this season.

Krueger said the Sabres lost their energy level following their fast start before the crowd of 15,383 inside KeyBank Center.

“We seemed to be digging deep the whole rest of the game,” he said. “We fell back on our heels.”

“They like to transition, so they’re (good) at clogging lanes and turning pucks over and feeding off that and quickly turning it up the other way,” Skinner said. “For us … we couldn’t consistently find a way to break through that and get down there and spend time down there. …

“It makes for a long night.”

One thought on “Despite loss to Coyotes, Sabres finish October in NHL’s top spot”