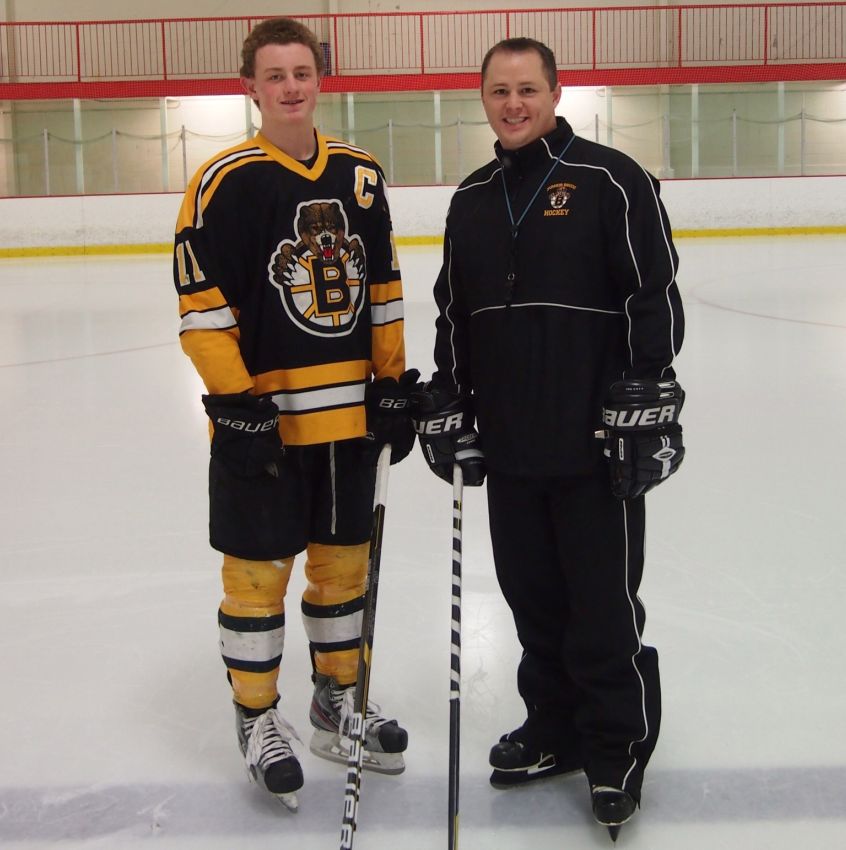 SUNRISE, Fla. – In the beginning, Jack Eichel’s development was slow. The greatest hockey prospect the United States has produced in perhaps a quarter century was simply a very talented child, one of the best around New England at 8 or 9 years old.

But he wasn’t a phenom.

“Since he was little, it’s been a slow progression from a very good player to an elite in his area, in New England and the USA and now in the world,” said Chris Masters, Eichel’s coach with the Boston Junior Bruins.

From 10 to 12 years old, Masters said, Eichel began to distance himself from the other elite forwards born in 1996. By 13 or 14, he had morphed into one of the country’s best youngsters.

That’s where the picture of Eichel, the Boston University superstar the Buffalo Sabres will select second overall tonight, starts to develop.

“He just separated himself from the rest of the pack,” Masters said. “In my opinion, his ability, his work ethic and how he just continued to get better, while everyone else, while getting better, just didn’t get better at the accelerated pace he did.”

Today, the 6-foot-2, 194-pound Eichel is the best prospect in the world not named Connor McDavid. In virtually any other year, he would be the No. 1 pick. Some scouts believe there’s very little gap between the two and it could only grow closer in the coming years.

Eichel possesses a wow factor rarely seen in teenagers. Eyes are drawn to him no matter where he is on the ice. His skating stride is long and effortless. His reach draws comparisons to the great Mario Lemieux. He could become a franchise-changing talent for the Sabres.

But even a few years ago, Eichel wasn’t even a clear-cut pick for the U.S. national team.

“It wasn’t, ‘Jack Eichel, he’s a must-get player,’” Masters said. “Once he got to that camp and later in that process it was, ‘OK, geez, this kid is off the charts and he’s going to be an impact player for us.’”

How has Eichel reached this level?

Eichel wasn’t the kid everyone wanted to see at tournaments. That honor belonged to Daniel Sprong, a high-scoring winger who should be drafted Saturday.

“When you heard (Sprong) was in the building, everyone would shuffle over to that rink to watch him play,” said Peter Masters, who co-owns the Junior Bruins with his brother, Chris. “Jack was not one of those kids.”

Eichel wasn’t electric yet. His teams didn’t win simply because he showed up.

To Chris Masters, who played beside several future NHL players at Boston College in the 1990s, including Sabres captain Brian Gionta, the best players are self-motivated.

Masters first coached Eichel about 10 years ago in a summer league. Even then, in elementary school, he was totally focused on hockey and becoming the best player.

“Certainly, I think there’s some God-given ability,” Masters said. “But after that there is a tremendous work ethic, a commitment to getting better.”

Given the choice of watching a movie or skating and shooting pucks, Eichel chose to put the work in.

“If he could skate three times a day he would,” Masters said. “Then he’d go find a basement to work on his stickhandling or go shoot some pucks some more.”

“I struggled at points, but Chris and Peter always stuck behind me,” Eichel said Thursday.

All players, especially those just beginning high school, have flaws. But Peter Masters couldn’t find any by the time Eichel was about 14 or 15.

“I couldn’t find a chink,” he said. “There wasn’t anything in there.”

To some observers, since Eichel didn’t race around the ice chasing pucks, he appeared a bit lazy, Peter Masters said.

“For us, we knew it wasn’t laziness,” he said. “It was just kind of maturity beyond his years, understanding when to exert the energy and when not to.”

As Eichel got older, it became more apparent he was smarter than the competition. He processed the game on a different level.

“He saw movements two or three plays before it happened,” Chris Masters said.

Masters loves to tell a story about Eichel’s natural instincts as a 14-year-old in overtime of a national semifinal game against 17- and 18-year-olds.

Eichel grabbed the puck along the right wall and chipped it by the opposing defensemen at his own blue line.

“He just takes what looks like three strides and he’s the length of the ice and he has one more player to beat,” Masters said.

Instead of simply getting the puck on net, Eichel used his reach and body position to fend off the last opponent, skate around the net and score a wraparound winner.

Peter Masters saw flashes of the brilliance up close when, in the midst of scoring 39 goals and 86 points in 36 games as a 15-year-old, Eichel earned a three-game promotion to his club, the top Junior Bruins squad.

“It’s kind of the same way you look at him now,” he said. “Sometimes you just sit back and go, ‘Holy God, did he just really do that?’ He even had that then.”

Against a strong team with 19- and 20-year-olds, Eichel grabbed a pass in the neutral zone, exploded between the two defensemen and “kind of tiptoed” through them for a breakaway.

Eichel couldn’t complete the nifty play. It didn’t matter, however.

“It was that explosive and special that anyone who knew hockey knew they just saw something you don’t see,” Peter Masters said.

Following the game, the opposing coach, Scott Harlow, told Masters if Eichel wasn’t a top-five pick, he would eat his hat.

Mature beyond his years

Part of Eichel’s success, no doubt, is related to his maturity. Any outside pressure has never fazed him. Those who know him best mention how he could handle an interview as a 13- or 14-year-old like a college sophomore would.

“There’s a lot of outside noise that he had to deal with, and I thought he dealt with really well,” said Danton Cole, Eichel’s coach at the development program. “That’s a big part of it, I think if guys can separate that and understand what their promotional or political role in the game is and … understanding that that really has nothing to do with what goes on the ice.”

“There’s really no shortage of good things to say,” Masters said. “If someone wants to press me and make me say something bad about him, to be honest, I have trouble finding anything negative to say about him as a player or a person. Just someone a coach dreams of, a super talent but also someone who puts the team first, works hard, isn’t one of these players who feels he knows everything. He’s a coachable player.”

It’s no surprise to Peter Masters that Buffalo fell in love with Eichel when he visited for the NHL Combine early this month. Eichel’s a likable guy.

“He really is a super kid,” he said. “I say it to everyone who I talk to that’s really a reflection of his parents, Bob and Ellen. They’re super people, blue collar, down to earth. Never let themselves or Jack get a big head and always kept him grounded.

“It doesn’t surprise me … that they’ve warmed to him and he fit in. He comes from a town that’s blue collar. I look at Buffalo as blue collar. I think it’s really a good fit from a kind of a culture of a city perspective. He’ll fit right in.”