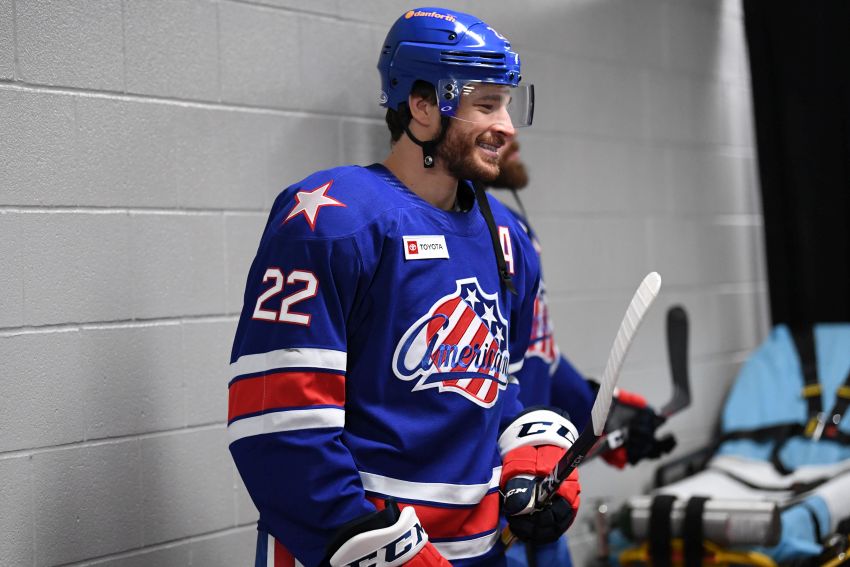 Zach Redmond and his wife, Maggie, wrestled with their decision. Rochester, after all, became their second home.

On the ice, Redmond, 31, thrived for three seasons, morphing into the Americans’ biggest star and perhaps the AHL’s most dynamic defensemen. The Redmonds felt so comfortable they purchased a house a five-minute drive from Blue Cross Arena.

“If I’m not (in the NHL), I really could not have imagined a better setup (than Rochester),” said Redmond, whose new contract with Red Bull Munich, a team in Deutsche Eishockey Liga (DEL), was announced Sunday.

In signing a lucrative two-year AHL contract in 2018 to stay in Rochester, Redmond essentially ended his NHL career. A recall to the big leagues was no longer possible under that deal.

“I could never, ever regret signing the American League deal I did that brought me back, but it did kind of put an end to the NHL side of things,” Redmond told the Times Herald by phone Tuesday from his offseason home in Michigan.

But that decision also created new opportunities. After yo-yoing between the NHL and the AHL for six years, the stability he enjoyed contributed to a career season in which he was named the league’s best defenseman in 2018-19.

The end of Redmond’s NHL days also allowed him to chase new adventures.

“Once the NHL thing was kind of done with and (I) kind of stopped getting called up, I wanted to see, I guess, what the rest of the world was like and maybe look at moving on,” he said.

So with his contract set to expire at the end of this season, Redmond began exploring his options. Earlier this season, the nine-year veteran started talking to Red Bull, one of the premier teams in Germany.

“You kind of want to stay in the moment and do the best you can, but you also have to think about your future, what that might mean as well,” he said.

Still, Redmond said talking to another team – even one thousands of miles away on a different continent – felt “weird.”

“You’re trying to give your all for the team that’s right there in front of you,” he said. “So I kind of ended up putting it on the shelf for a while. I just wanted to do the best I could for Rochester.”

Later in the season, however, Redmond and Red Bull restarted talks. Before he made his decision, he spoke to the Amerks around midseason to gauge their interest in bringing him back.

“At the time, (they said) it was kind of like, ‘Well, we’re going to have to wait a little bit longer,’ which is completely normal,” Redmond said.

Redmond decided to start what he called a “new chapter.” When the COVID-19 pandemic hit – the AHL suspended its season indefinitely March 12 – he said he had completed his negotiations with Red Bull, the team that produced Sabres winger Dominik Kahun.

“The city sounds amazing, the team is always competing for a championship, (it) sounds like they treat you well,” Redmond said. “Just everything, really, that we looked into, it kind of checked all the boxes for us.”

He added: “It definitely was a tough decision”

He said the security his contract provides is “the cherry on top.”

Redmond, who played three of his 133 NHL games for the Buffalo Sabres, doesn’t know if the Amerks wanted to re-sign him.

“The season wraps up and then you reevaluate things and figure out where you want to go for the future,” he said. “At the time, when we were trying to figure all this out, I don’t think Rochester was quite ready to commit.”

Replacing the popular Redmond will be difficult. He leaves as one of the most decorated defensemen in Amerks history.

His arrival in a trade from the Montreal Canadiens days before the 2017-18 season coincided with the Amerks’ revival after some lean years.

Redmond wanted out of Montreal – “I had just kind of gotten written off at an NHL level,” he said – and had thought about the Sabres organization as a possible destination.

“I got that call from Buffalo at what seemed just a perfect time,” he said.

Redmond compiled 15 goals and 47 points in 66 games two years ago and followed up by shattering his career highs by scoring 21 goals, a franchise record for a defenseman, and 50 points in 58 outings last season.

“That coaching staff was the best I’ve ever had, so I can say that helped me play my best hockey,” Redmond said of coach Chris Taylor and his staff. “I think I always knew I was capable of it. It’s just you don’t always get that situation, you don’t always get the belief that I had in Rochester. For that, I’m just so grateful they let me kind of achieve what I thought I was always capable of.”

Redmond spent most of this season paired with rookie Jacob Bryson, who quietly developed into one of the Sabres’ top defense prospects. The Amerks might miss Redmond’s mentoring skills and professionalism as much as the offense he provided.

While the Amerks lost in the first round of the playoffs in each of the last two seasons, Redmond helped them establish themselves as a regular-season heavyweight. They ranked second in the North Division when the AHL suspended play this season.

“I wish we would’ve gotten a chance this year with the playoffs,” said Redmond, who believes the AHL will cancel the rest of the season.

This year’s team doesn’t have as much firepower as the 2018-19 edition. Still, the Amerks possess depth and often showcase a tighter style.

“It did seem like we were built a little tighter with maybe less leaks,” Redmond said. “It would’ve been really cool to give it another crack and definitely try to get out of the first round and beyond. So that is one thing I’m definitely sad about.”