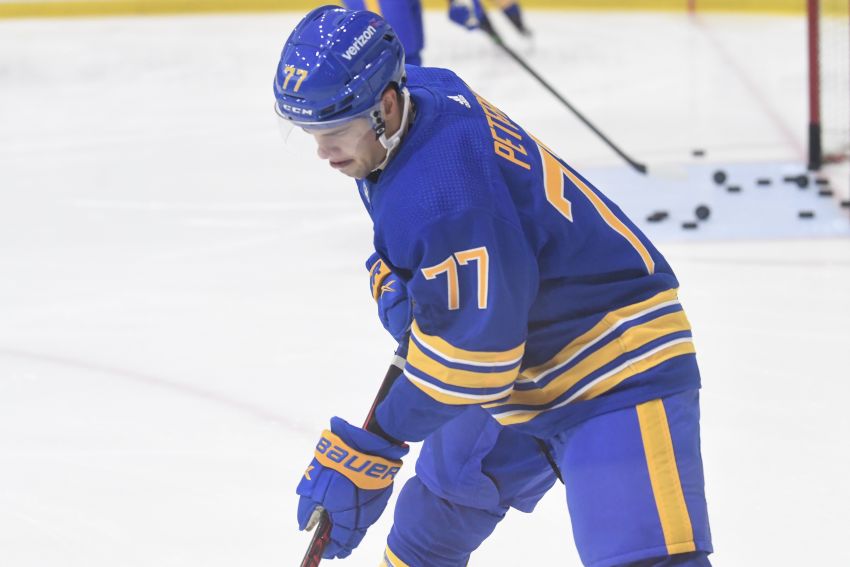 JJ Peterka is one of Buffalo’s top prospects. ©2021, Micheline Veluvolu

BUFFALO – In the Sabres’ recent history, games as significant as tonight’s can be counted on one hand. How often have three highly regarded young players – in this case, forwards Peyton Krebs, JJ Peterka and Alex Tuch – all made their debuts together?

Their presence illustrates that after a decade of futility, maybe – just maybe – a franchise known for dysfunction is starting to get things rights.

In less than a year, the Sabres have dramatically shifted course, morphing from a team desperately trying to make the playoffs into a rebuilding one. In starting over again, they’ve developed a plan they’re hellbent on sticking to and accumulated a strong stable of prospects and high draft picks.

The forwards expected to debut tonight against the New Jersey Devils at KeyBank Center will likely be a huge part of any success the Sabres enjoy in the future. That’s why a midweek, late-December game against a 10-win opponent has quickly become so interesting.

The Sabres on Tuesday recalled Krebs, 20, and Peterka, 19, and center Arttu Ruotsalainen, 24, from the Rochester Americans because they have five forwards in COVID-19 protocol. Meanwhile, Tuch, 25, has anxiously been waiting to play his first game for his beloved Sabres, the team he cheered for growing up in Baldwinsville.

Peterka practiced at left wing Tuesday beside center Tage Thompson and Tuch on what could be considered the top line, while Krebs centered Brett Murray and Kyle Okposo, the Sabres’ leading scorer.

After recovering from offseason shoulder surgery, Tuch was ready to play last Monday before postponements wiped out the Sabres’ week.

Krebs and Tuch, the players the Sabres received from the Vegas Golden Knights in the Jack Eichel trade, have already played in the NHL. However, Peterka, the 34th pick in 2020, will be playing his first big league game.

“His cheeks flared out,” Ellis said following practice. “Just enthusiasm, from the second both those guys (Krebs and Peterka) arrived today.”

Peterka couldn’t hide his excitement hours later when he spoke with the media, smiling throughout the four-minute session.

The German was grocery shopping with Linus Weissbach on Monday in Rochester when his teammate’s phone rang.

Peterka’s phone wasn’t working, so to relay some special news, Amerks coach Seth Appert called Weissbach, one of his roommates.

“That was kind of weird but then I got the phone and Appert told me I got called up, so it was amazing,” Peterka said.

When Peterka, 19, returned home – he needed WiFi to use his phone – he immediately called his parents, who are vacationing in New York. They plan to be in Buffalo tonight.

“It was great timing, I guess,” said Peterka, who has compiled four goals and 20 points in 23 games with the Amerks during his first season in North America.

Peterka enjoyed a strong training camp before being sent to the AHL. Despite his disappointment, he embraced the opportunity.

“I was like a little bit sad that I didn’t make the team,” Peterka said. “But I took that as a learning process and we have a great coaching staff down there in Rochester. So I think, yeah, I really improved there. So I think it was a big step for me to go down and have big minutes there.”

Ellis, who will likely sub for head coach Don Granato while he’s in COVID-19 protocol, said Peterka “attacks everything he does.”

“The details inside his game, his defensive details have been pretty good,” Ellis said. “His on-ice awareness to what goes on away from the puck has been a major area of growth, and he’s a hound. He’s one of those players that there’s never an easy puck, never an easy shift. He’s a tough guy to play against.”

Krebs, meanwhile, played 13 games with the Golden Knights, including nine this season before the Nov. 4 trade. Still, he acknowledged it “definitely feels a little bit like the first game.”

“At the same time, I definitely have an outlook on what it’s going to be like on the ice,” Krebs said. “It’s exciting.”

“There’s a sense of calm to his game,” Ellis said. “He makes quick reads, he’s able to scan the ice extremely well, understand where other players are, where time and space is, where his options are. And he has offensive gifts with his vision that have been apparent right from the get-go.”

Krebs, the 17th pick in 2019, said having been dealt for Eichel doesn’t affect him.

“I have high expectations for myself from the beginning and because I got traded for a good player doesn’t mean I’m going to change those,” Krebs said. “I’ve always put a lot of pressure on myself so I think that’s not going to change for me.”