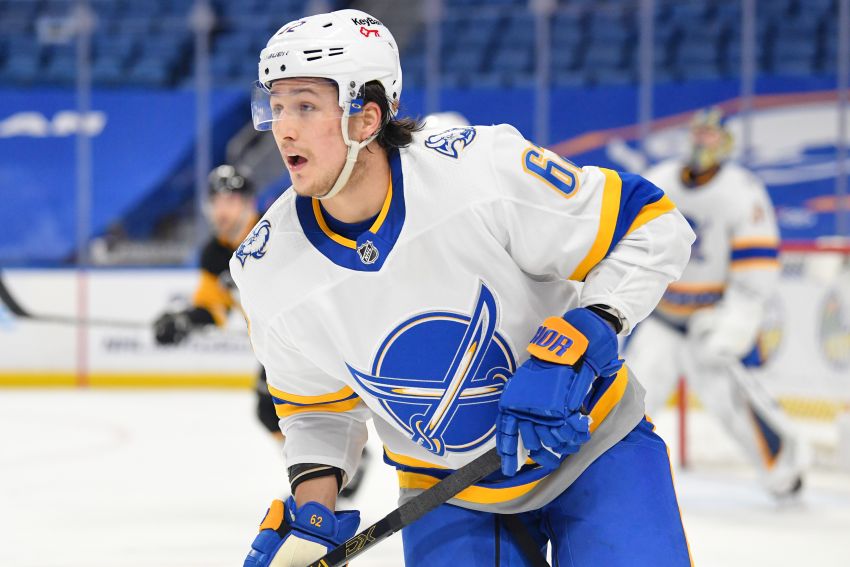 BUFFALO – Defenseman Brandon Montour, like so many of the Sabres’ other notable acquisitions in recent years, left town having never sniffed the playoffs.

The Sabres on Saturday traded Montour, who turns 27 today, to the Florida Panthers in exchange for a third-round pick in 2021.

The move was significant. For the first time in years, instead of selling off assets, the Sabres made a deadline deal to help them immediately.

But Montour rarely looked like the puck-moving defenseman from his Anaheim days. Last season, Montour, a right-handed shot, struggled to adjust to playing on the left side. He also battled injuries over his 112-game tenure in Buffalo.

The Sabres, meanwhile, have remained the NHL’s bottom-feeder.

By earlier this season, as the Sabres fell to the bottom of the league again, it was clear GM Kevyn Adams would deal Montour before Monday’s deadline.

When Montour wasn’t on the ice for Saturday’s practice inside KeyBank Center, a trade appeared to be imminent. At the end of the session, Montour showed up on the bench to say goodbye to his teammates.

The Sabres announced the deal about an hour later.

“He was a lot of fun to be around,” interim Sabres coach Don Granato said on a Zoom call Saturday of Montour. “He’s competitive, brings a lot of energy, a lot of life. As you guys have come to know, he’s a high-character guy. So we knew this was a possibility, obviously, his contract status and where we’re at. No surprise for the players and the guys.”

Granato said Montour “was incredible” leading up to the trade.

“He played hard last night,” he said. “He kept this out of his mind when the puck dropped. I say that even in practice and the meetings, he was a true pro.”

Montour has registered five goals, 14 points and a minus-13 rating in 38 games this season. He scored four of those goals in his final seven appearances.

He signed a one-year, $3.85 million contract before the season and can become an unrestricted free agent this summer.

Montour, who played 17 playoff games as a rookie with Anaheim in 2017, will likely experience the postseason again this spring. The Panthers, one of the NHL’s biggest surprises, rank third in the Central Division, just one point behind the first-place Carolina Hurricanes.

Given the Sabres’ sorry state, Adams, of course, will likely make more trades before 3 p.m. Monday.

“Some tough times seeing some of your buddies get traded but it’s part of the game and it’s exciting times at the same time, too, getting new guys in and seeing what they can do,” Sabres rookie center Dylan Cozens said.

Granato said they must discuss how they will replace Montour, who averaged 20 minutes, 32 seconds of ice time a game.

“We don’t go into those type of hypotheticals, ‘If this guy’s moved,’” he said.

The Sabres have an extra defenseman, Matt Irwin, on the roster. They also have some strong defense prospects – most notably Casey Fitzgerald, Oskari Laaksonen and Mattias Samuelsson – with the Rochester Americans.

“Those are really the options,” Granato said of using Irwin or recalling a young player.

The Sabres should also have defenseman Will Borgen back later this month. Borgen, 24, underwent surgery in late February to repair a broken right forearm.

Granato said Borgen did not accompany the Sabres on their three-game road trip, which starts this afternoon against the Philadelphia Flyers.

“He will stay back and skate and progress,” Granato said. “We don’t have an indication of when he’ll jump into practice with us. But it’s getting closer. It is, I would estimate, within a week he’d be doing that.”