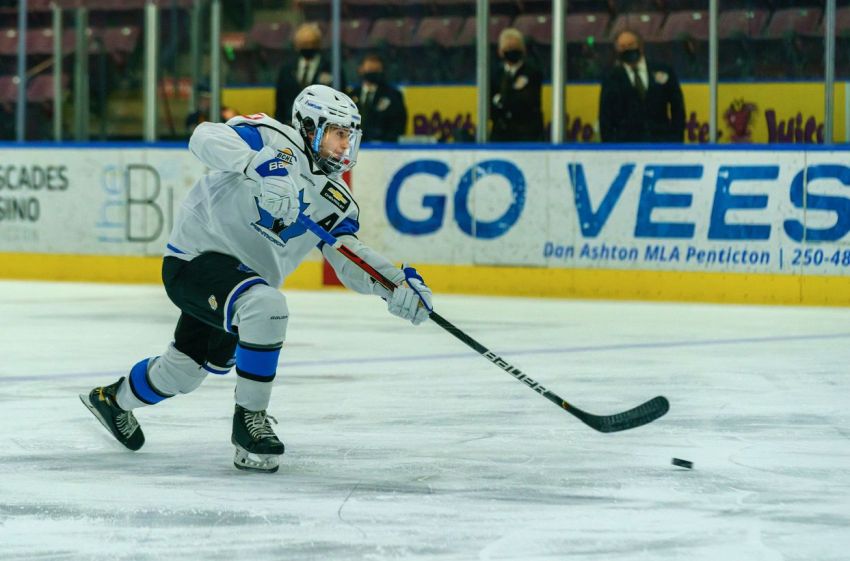 After completing their work at the rink Oct. 7, Matteo Costantini and four of his Penticton Vees teammates gathered in his billet family’s basement to watch the final rounds of the NHL Draft.

Having starred for the Buffalo Jr. Sabres and developed in the Academy of Hockey at LECOM Harborcenter, Costantini knew the Sabres were interested in him.

“The fifth round came around and Buffalo’s pick showed up,” said Costantini, a center the Sabres drafted 131st overall. “I saw my name pop up on the screen, I was like, ‘This is crazy, right?’ It was an unreal feeling, and I got to share that moment with those guys, and that is something I will remember for the rest of my life.”

The COVID-19 pandemic forced the NHL to hold the draft virtually, depriving Costantini a chance to enjoy the once-in-a-lifetime moment by hugging his parents, Dino and Vesna, at the rink or in their St. Catharines, Ontario, home.

So Costantini, 18, experienced a unique draft celebration. His billet father is Scott Niedermayer, one of the most decorated defensemen in hockey history.

Niedermayer won four Stanley Cups, an Olympic Gold medal, the Norris Trophy and the Conn Smythe Trophy during his illustrious 18-year career. How many kids can say they learned they had been drafted in the basement of an NHL Hall of Famer?

“Everyone was ecstatic,” said Costantini, who said being drafted by the Sabres offers him comfort.

Two of Niedermayer’s sons, Jackson and Joshua, play for the Vees and shared Costantini’s special moment with him.

“I won the luck of the draw, obviously, and ended up getting to stay with them, which is very special,” Costantini said.

The 6-foot, 174-pound Costantini developed into a special player for the Jr. Sabres last season, earning the Ontario Junior Hockey League’s Top Prospect Award and Rookie of the Year honors.

“He was a player that thrived under structure,” Jr. Sabres coach Nick Tuzzolino said. “Within his role, within his system, he was the best. Definitely last year was a monster year.”

Of course, the 36 goals and 68 points Costantini scored in 50 games last season grab your attention.

“He did amazing things when it came to individual goal stuff,” Tuzzolino said. “But nothing he did was … selfish. He made his whole line (better). His whole line led the league in points. He pulled the whole team together to go on (a long) run.

“Everything he did was kind of old school in that regard. So that’s where, I think, he excelled the most was he got to kind of see what the rest of the game’s going to be.”

His mix of talents – Tuzzolino said Costantini combines his old-school style with “a new-age kind of shot, skating capability” – caught the eye of big NCAA programs. He officially signed his letter of intent to play at North Dakota last week.

“This day and age, everyone has that Auston Matthews and Jack Eichel type of toe-pull where they’re able to get that snap off,” Tuzzolino said. “He shoots like that.”

Tuzzolino said the attention to detail and durability Costantini showcases on the other end reminds him of former Detroit Red Wings star Pavel Datsyuk. Costantini plays a mature game.

Instead of attending school this season, Costantini moved to postcard-pretty Penticton and joined the Vees, a British Columbia Junior Hockey League powerhouse.

“Especially with COVID, I was like … I want to stay in Canada,” he said. “The option to come to Penticton kind of presented itself.”

Naturally, Vees coach Fred Harbinson believes living with the Niedermayers will be an invaluable experience for Costantini.

“It’s all part of the whole, I guess, allure of coming out here where he gets to live in that kind of environment and play on a team that has a chance to win something this year,” he said.

The BCHL is scheduled for begin its regular season Dec. 4. The Vees went 13-1 during an “extended training camp,” winning the inaugural Okanagan Cup, a tournament the BCHL started because of the pandemic.

In 13 games, Costantini scored six goals and a whopping 20 points. The Vees have already named him an alternate captain.

“He’s as good a person as he is a player,” Harbinson said.

Tuzzolino said when Costantini played in a prospects game last season, he needed to give a little info about himself for his bio in the program.

“He couldn’t say anything about himself,” he said. “All he could talk about was his teammates.”