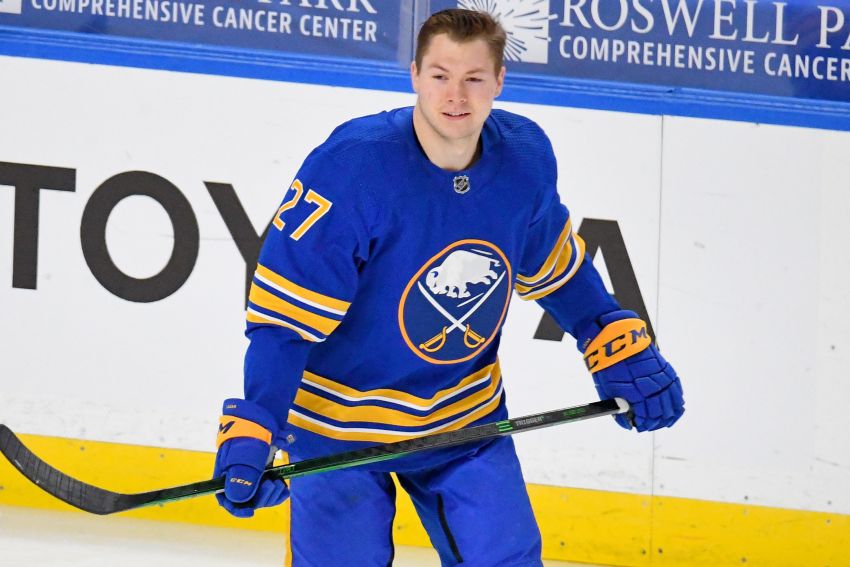 The Sabres, who host the New York Rangers tonight at KeyBank Center, have become woefully thin down the middle. In addition to Lazar, three other centers – Jack Eichel, Dylan Cozens and Eric Staal – have been injured or traded in the last month.

Granato said he will keep Sam Reinhart, a winger the Sabres shifted to center Wednesday, in the middle tonight.

After missing several shifts late in the second period, Lazar tested his injury once and departed the game following the second.

“I can’t tell you how many times I’ve looked at the bench and you’re down to nine, 10 forwards right away within five minutes of the game,” Granato said on a Zoom call this morning. “That’s been a real bummer from a standpoint of you have to mix the lines up the whole game. The next day you’d love to do line work with guys, just a couple video clips, but they’re all mixed. So that’s on the challenging side.

The Sabres, of course, drafted Reinhart as a center. He has occasionally played the position over his six-year career.

“Sam Reinhart was excited about playing center, felt it was a challenge but felt he could do it,” Granato said.

Granato said backup Dustin Tokarski will start in goal, his third nod this season. No. 1 goalie Linus Ullmark has played three straight games after missing more than month recovering from a lower-body injury.

“I just don’t feel it’s right to go back-to-back with Linus,” Granato said. “He’s done a tremendous job and a return quickly got to pace as a we saw a couple games ago.”

The Sabres only held a team meeting this morning after ending their 18-game winless streak Wednesday.