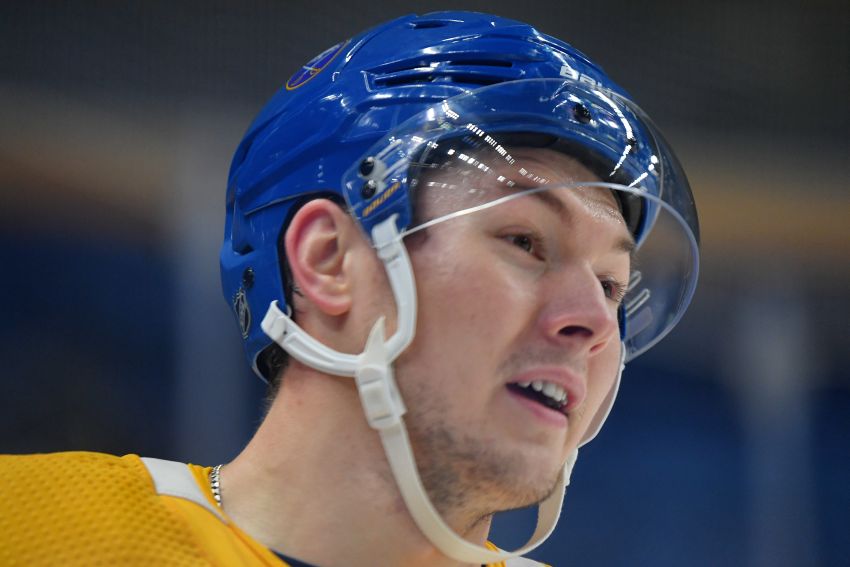 Ex-Buffalo Sabres center Curtis Lazar signed a two-year contract prior to the season and quickly solidified a regular spot in the lineup, so he wasn’t expecting to be traded before this afternoon’s deadline.

“Yeah, it completely caught me off guard,” said Lazar, who was dealt to the Boston Bruins earlier today with winger Taylor Hall in exchange for forward Anders Bjork and a second-round pick in 2021.

“My first thought was ‘Where am I going?’” Lazar said on a Zoom call. “My wife and I just actually had our first kid a week ago. So a lot of moving parts right there. But (I) couldn’t be happier with Boston, the opportunity. Obviously, they see something in me that they liked to include me in that deal. And I’m ready to prove it and show it.”

The affable Lazar, who always seems to be smiling, proved his worth to the Sabres over parts of two seasons.

After spending nearly all of 2018-19 in the minors, Lazar signed with the Sabres and started last season in the AHL again. But following only 18 games with the Rochester Americans, he earned a job as the Buffalo’s third- or fourth-line center, showcasing a heavy style, killing penalties and contributing offense.

“I kind of hit my stride in Buffalo,” Lazar said. “And I want to build off what I learned there and continue that with the Bruins.”

“I’m not surprised that Curtis was targeted by Boston,” he said. “He’s a good hockey player and plays his role well. So, yeah, it’s the hard part of this business, especially when you’re talking about quality people and having to make hard decisions. I think from our perspective we feel that we had a chance with a player like Bjork to have a bigger impact on the offensive side of the game with an expanded role than maybe where Curtis’ role was. …

“I wish Curtis all the best. He’s a tremendous person and was really professional here.”

An opportunity to play for the Bruins, one of the NHL’s perennial heavyweights, excites the 6-foot, 193-pound Lazar. He said he “always loved playing Boston, just because it’s going to be high pace, it’s going to be gritty.”

“They kind of have that swag and physicality, which is what I really pride myself in in taking the body and setting the tone that way,” he said. “I kind of see myself as a perfect fit in that team, just in that regard. You play the right way, you let the puck do the work and you don’t back down from anyone.”

“I feel like for the both of us a chance to play some competitive hockey, be in that playoff race, it’s exciting,” Lazar said. “That’s what every player wants, to be in the postseason. We’ve got a great chance here. I’m happy to be a part of a very special organization in the Bruins. I respect that team, the way they play. I respect the entire organization.”

Lazar, who has missed the last six games recovering from an upper-body injury, said he feels “pretty much good to go now.” He stayed in Buffalo for conditioning skates when the Sabres left town Saturday.

He said he planned to drive from Buffalo to Boston today and could be an option for Tuesday’s game against, coincidentally, the Sabres.

The Sabres and Bruins play six more times this season.

“I look forward to sticking it to them tomorrow and next week,” he said.