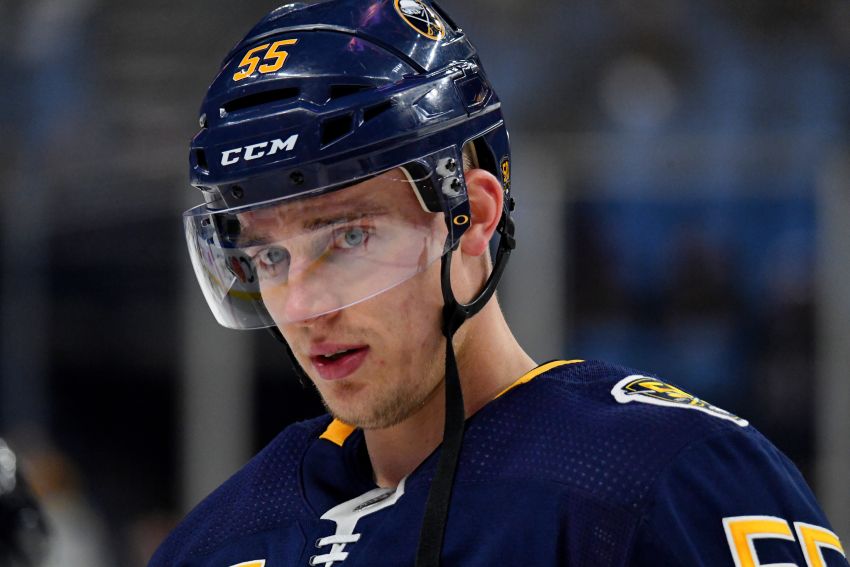 Rasmus Ristolainen has scored all three of his goals around the net this season. ©2019, Micheline Veluvolu

BUFFALO – Having scored all three of his goals this season at the net, Sabres defenseman Rasmus Ristolainen feels very comfortable around that area these days.

“I feel that’s my office now, the blue paint,” Ristolainen joked after scoring in Saturday afternoon’s 3-2 win over the Los Angeles Kings. “It’s the only place I can score right now, so I’ve got to go there a couple times a game, maybe get a bounce like today.”

Ristolainen tied the game at 1 by converting a rebound from goalie Jonathan Quick at the bottom of the left circle 7:35 into the second period.

Still, that goal wasn’t the result of a lucky bounce, said defenseman Marco Scandella, whose goal later in the period put the Sabres up for good.

“We have really good forwards who can find us so we’re just playing with confidence right now and using each other,” said Scandella, who scored on a slap shot from inside the blue line at 16:48.

Ristolainen said: “Our forwards are really working two ways. It’s really easy to trust them, they’re coming back. I saw maybe one forward was changing there, so I felt a little chance to go down to the net and the puck got to me.”

In 38 games under coach Ralph Krueger, the Sabres, according to Scandella, have grown more comfortable with each other and the new system.

“You can see D diving in and making smart plays and just playing with more confidence,” Scandella said. “(We’re) opening up space for the forwards and at the same time, we’re going to be open and getting chances, too.”

The Sabres sorely need more secondary scoring. With a slew of forwards slumping, they’ve been relying too much on captain Jack Eichel’s line for offense.

Not surprisingly, two critical goals from defensemen turned out to be the difference Saturday before the announced crowd of 17,484 inside KeyBank Center.

“It shows resiliency,” Scandella said. “We didn’t let ourselves go down after that. We just kept pushing, and I felt like we had a really good second period.”

Ristolainen said Kempe’s goal – “It was a tough shift, long shift,” he said – ticked the Sabres off.

“I got angry, so I hope we got angry,” he said. “We got a couple long shifts in their zone and I think that really got us going. I don’t think they can handle us down there, and we had those long shifts that grinded them down and gave us a lot of energy.”

The Sabres then grinded out their 11th home win and 17th overall. Ullmark looked sharp throughout his 21st start, making 25 saves, including a point-blank glove stop on Kings center Anze Kopitar as time expired in the second period.

“He’s emitting a calm in his persona,” Krueger said.

The Sabres, who often imploded late in games in past years, improved to 14-0-0 this season when leading after two periods.

“It is a mindset,” Krueger said of closing out games. “It’s playing for the team, sacrificing and doing what the team needs. That’s how you get those finishes like we did today.”

Saturday ended up being a tight finish.

Eichel, who missed Thursday’s ugly 6-1 road loss to the Philadelphia Flyers with an upper-body injury, assisted on Olofsson’s goal.

While the NHL no longer recognizes it as an official streak, Eichel has recorded a point in 18 straight outings.

“I felt good,” Eichel said of his return. “Like, in the first period, I think it took me a little bit to get into it. But I think I got more into the game as it went on and started to feel better. I had some chances.

“I thought we started moving our feet, competing better in the second period. I think that’s when we turned the tide of the game.”