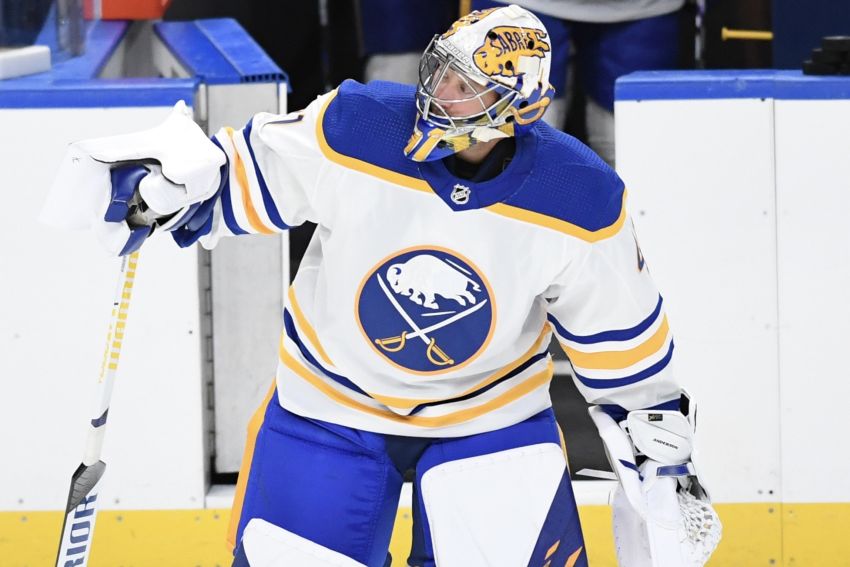 BUFFALO – If goalie Craig Anderson was in his mid-30s instead of two weeks away from turning 41, re-signing with the Sabres would be a no-brainer.

“If I was five years younger, that would be the ideal situation right now,” Anderson said Saturday of returning to the Sabres. “Yeah, the respect that I received as a player, the respect the players in the room get from management, from the coaching staff. You want to be here. You want to play for those guys.”

The respected veteran said his season with the Sabres was “amazing.”

But Anderson, the NHL’s oldest netminder, understands his body can only hold up for so long. He battled injuries during his 19th season, missing 35 games, including 32 straight from early November until late January as he recovered from a neck problem.

He ended the season sidelined by a hip injury.

The American wonders about the long-term effects everything will have on his post-hockey life.

“You’re dealing with the neck and hip,” Anderson said as the Sabres held end-of-season meetings inside KeyBank Center. “There’s some serious considerations to take into account.”

Anderson hasn’t decided if he will play next season. The Sabres, who have zero goalies under contract for 2022-23, would likely love to re-sign him if he doesn’t retire. Even in a secondary role, he could have a strong impact again on the Sabres’ youngsters.

He said he’ll take the next two or three weeks to “see how things calm down.”

“If things calm down the way I’d like them to, then that’s when the thought process would kick in,” Anderson said.

Considering retirement is nothing new for Anderson. He said he gave it “serious thought” the last two offseasons before signing one-year contracts.

“The age comes in, the body comes in,” Anderson said of his decision this year. “I think (Rick Jeanneret) said it best the other night: the spirit is there, the flesh is not.”

Anderson, whose 308 NHL wins rank 34th on the all-time list, said he felt great following his last outing April 8, a 5-2 win over the New Jersey Devils. But he woke up the next morning, went through his normal routine and experienced a little bit of hip pain.

After missing some practice time, he returned and appeared to be on track to start Friday’s season finale. Then he said the injury flared up.

“Now it’s just a matter of letting it rest and seeing where it goes,” Anderson said. “In my mind, it shouldn’t be anything to be really concerned about.”

Still, Anderson wonders if he plays again, what kind of role his body will allow him to fill.

“I don’t know if it’s 20 games, 40 games,” he said. “I don’t know. Who knows? We’re in limbo at the moment. The mind says absolutely, I would love to be with these guys and that says a lot as far as the group of guys and the management and staff.”

When Anderson signed a one-year, $750,000 contract on July 29, he said he had a short conversation with general manager Kevyn Adams about the rebuilding Sabres’ direction and goals.

“I felt that I was honored to be kind of selected to be a part of that because not only did they have faith in my ability to stop the puck, but they also had faith in me as a character person to do the right thing, lead the right way,” he said. “They didn’t know me from anybody, so that’s just between people talking and the information they gathered. That was kind of a nice feeling knowing that they feel that highly enough about you that they want you to be a part of a group to grow and do things the right way.”

Down the stretch, as the upstart Sabres enjoyed their most significant two-month run in more than a decade, he registered an 11-5-2 mark in 18 outings.

“The year played out, learning with these guys and getting to know everybody, I think it’s one of the most fun seasons I’ve ever had and one that I felt coming to the rink you enjoyed getting up in the morning,” Anderson said. “You enjoyed going to the rink, you enjoyed sitting there and having a coffee and hanging out with the guys before practice, after practice. It didn’t matter. Guys just wanted to be around each other and that’s something special here that Kevyn and Donny, it starts from the top. They’ve built that and it’s resonated through the group.”

Notes: Ex-Sabres goalie Ryan Miller, whose 284 wins rank first in franchise history, has been named to the Greater Buffalo Sports Hall of Fame’s 2022 class. … Adams and Granato are scheduled to hold an end-of-season news conference today. … The Rochester Americans on Monday recalled goalie Michael Houser from the Cincinnati Cyclones. Goalie prospect Ukko-Pekka Luukkonen suffered a lower-body injury Friday and is out for their play-in AHL playoff series that begins Wednesday against the Belleville Senators.