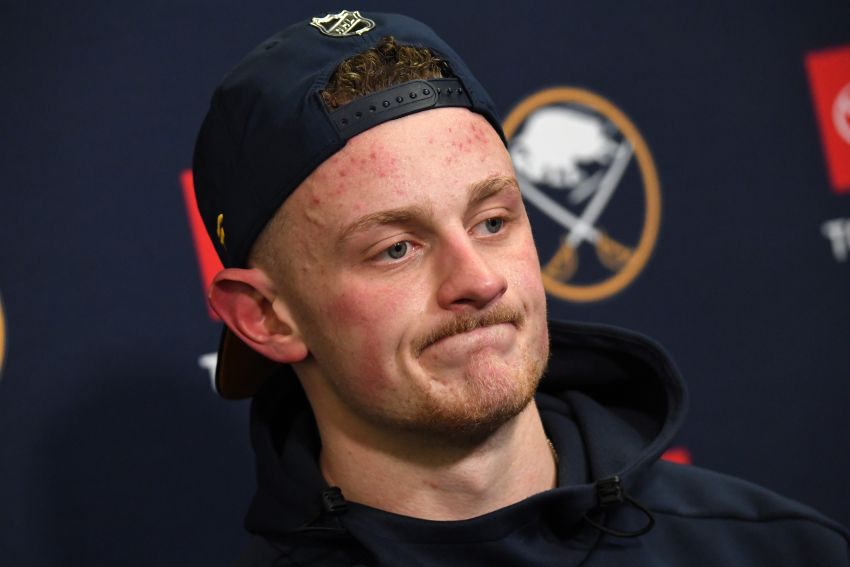 Jack Eichel might not have a chance to score 40 goals and 90 points. ©2020, Micheline Veluvolu

Before the COVID-19 pandemic forced the NHL to suspend its season indefinitely on Thursday, the Buffalo Sabres generated a little optimism in their last outing.

The final 13 games of the Sabres’ disappointing 50th anniversary season possess the potential to be entertaining. Maybe Eichel will hit the 40-goal or 90-point mark and complete one of the most prolific campaigns in franchise history. Perhaps Kahun can keep seizing his fresh opportunity.

Still, they may never have the chance. The Sabres’ season could already be over.

Just days ago, the thought of halting the season seemed unfathomable. Talk mostly centered on some teams possibly playing in empty arenas.

But by Wednesday night, a stoppage felt inevitable as more coronavirus cases were confirmed across the country and municipalities began banning large crowds.

The league announced the decision following a conference call with its Board of Governors and less than a day after the NBA suspended its season after one its players, Utah Jazz center Rudy Gobert, tested positive for coronavirus.

“In light of ongoing developments resulting from the coronavirus, and after consulting with medical experts and convening a conference call of the Board of Governors, the National Hockey League is announcing today that it will pause the 2019-20 season beginning with tonight’s games,” NHL commissioner Gary Bettman said in a statement Thursday.

The Sabres, who rank sixth in the Atlantic Division, were scheduled to play a road game against the Montreal Canadiens on Thursday and host the Boston Bruins on Friday.

“The health and safety of players, staff and fans is our top priority,” the Sabres said in a statement. “The Buffalo Sabres are in full support of the National Hockey League’s decision to pause the season. We urge all community members to practice caution and strictly follow the CDC’s guidelines for preventing the spread of disease during this time.”

It’s unclear how the NHL will proceed. There are 189 games left on the schedule. The playoffs are slated to start in one month.

Could the league cancel the season if the stoppage stretches well into the spring? Could an abbreviated postseason take place?

There have been two years in which the Stanley Cup wasn’t awarded: in 2005 after a lockout wiped out the entire season and in 1919, when the Spanish flu forced the championship to be canceled.

If the season resumes, players would need a “training camp.” Teams likely cannot hold formal practices during the hiatus.

Shortly after the NHL’s announcement, the AHL also suspended its season indefinitely, meaning the Rochester Americans, the Sabres’ top affiliate, are idle.

Ominous signs emerged Thursday morning the NHL would be pausing its season. Teams across the league canceled their morning skates. The Sabres announced they wouldn’t be holding a scheduled team meeting.

Players had been doing interviews in rooms and keeping a “safe” distance from the media.

Sabres coach Ralph Krueger said Tuesday the coronavirus began affecting his life earlier than most North Americans because his children live in Switzerland, where he used to coach.

“Europe had all kinds of cancellations and restrictions earlier than we’ve even thought about them here,” he said. “So I’ve been faced with it. But, I mean, it’s something we’re taking extremely seriously and I think everybody needs to take it seriously.”

He added: “We’re taking all the recommended steps here.

The Sabres announced tickets will be valid for the rescheduled dates. Remember, nothing has been canceled yet. Fans can call 1-888-GO-SABRES or reach out to their account representative with their questions.