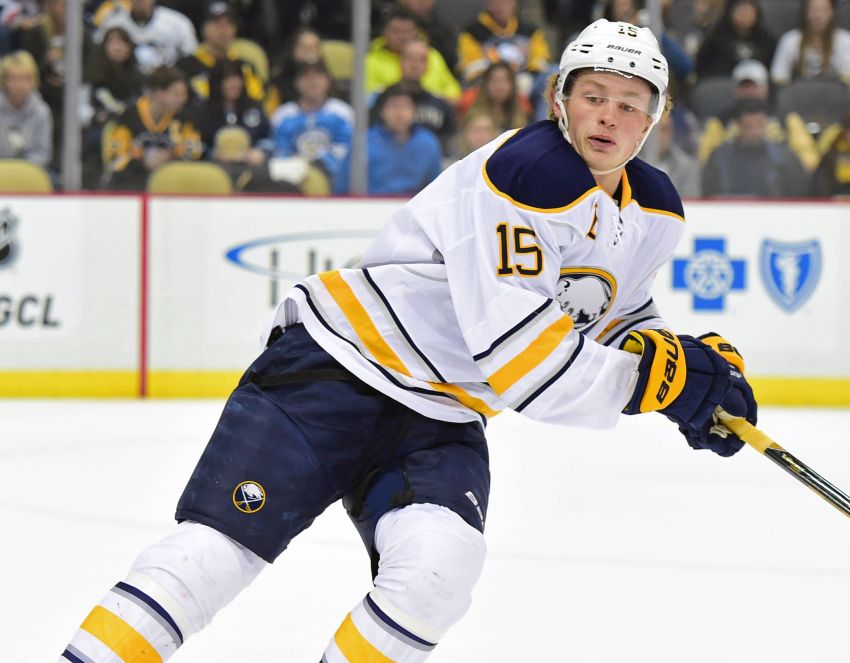 BUFFALO – Throughout training camp, as Jack Eichel’s contract hung over his head, the third-year Sabres star tried to focus hockey, blocking out any distractions the situation created for him.

But Housley, a 21-year NHL veteran, knows it wasn’t easy for Eichel, who signed an eight-year, $80 million contract Tuesday night.

“Is there some weight off his shoulders? I think so.” Housley said this afternoon after the Sabres prepared for Thursday’s season opener. “I think he can really focus on his game right now moving forward.”

He added: “He handled it quite well. I’m just speaking on experience being in his position, playing under those circumstances. It’s always in the back of your mind, obviously.”

Eichel, 20, will formally discuss the contract at 2 p.m. inside the KeyBank Center atrium.

When the Sabres ended practice this morning at HarborCenter, the players formed a circle at center ice to begin stretching. Sabres veteran Jason Pominville then nudged Eichel into the middle to lead the stretch.

Housley said he saw “a new spirited young man” in this morning’s practice. Living up to the contract, Housley said, won’t be a burden for the talented center.

“He’s just got to go about his business,” he said. “We got to try to put him in positions to succeed. I just want him to come to the rink and enjoy himself.”

Update: Some quotes from Eichel:

On the contract length: “It was pretty obvious both sides wanted eight years. I told my agents I wanted to be here for as long as I could.”

On Buffalo: “This city means so much to me. I like to think I mean a lot to this city as well. This organization has been nothing but great to me since the day I walked in the doors, have given me every opportunity I wanted.”

On the future: “I owe it to them and I think I owe it to myself to do something special here with the group of guys we have in the room. With the organization, the people we have here, it’s really exciting times.”

In other news, the Sabres traded winger Nick Deslauriers to the Montreal Canadiens today for defenseman Zach Redmond.

The Sabres have already assigned Redmond to the Rochester Americans. The Canadiens meanwhile, have assigned Deslauriers, 26, to the Laval Rocket.

The 6-foot-2, 212-pound Redmond, 29, has nine goals, 38 points and 48 penalty minutes in 130 career NHL games with the Canadiens, Winnipeg Jets and Colorado Avalanche.

After four seasons, the Sabres waived Deslauriers last week and sent him to the AHL. The popular Deslauriers, the Sabres’ top fighter for years, has 12 goals, 30 points and 186 penalty minutes in 211 NHL games.

Housley said the captaincy will be evaluated today.

“We might have something tomorrow, but obviously we’re going to have captains tomorrow in our lineup,” he said.

“He’s in a position right now where he’s got to focus on everyday practices until he gets his opportunity,” Housley said. “He’s an experienced guy and a veteran guy that knows how to play, and when his opportunity comes, make the best of it.”