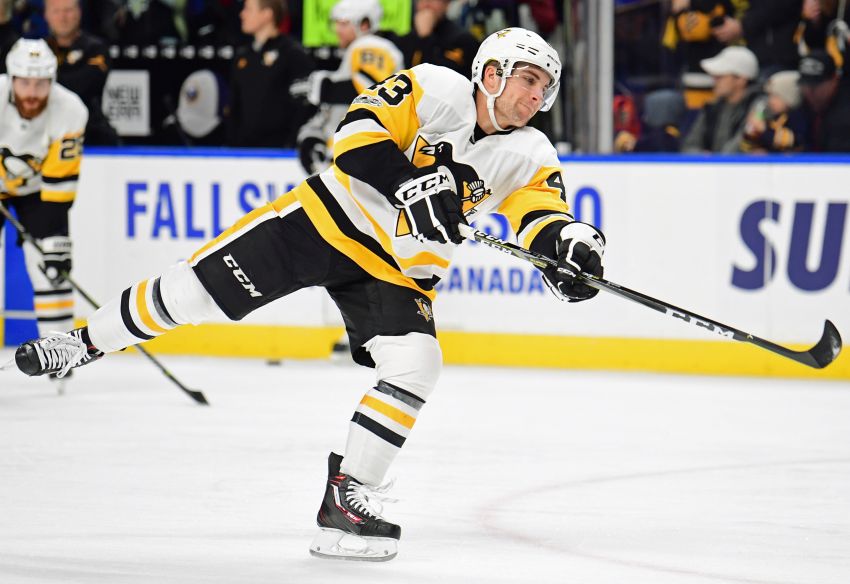 Conor Sheary thinks he can help the Sabres. ©2018, Hickling Images

BUFFALO – In adding Conor Sheary from the Pittsburgh Penguins, the Sabres filled a glaring hole in their lineup. The bottom-feeding club sorely needed a speedy winger capable of scoring goals, especially at five-on-five.

The Sabres now have a left winger they can utilize beside top center Jack Eichel. Having scored only four of his 48 NHL goals on the power play, Sheary owns a track record of producing offense at even strength.

But perhaps most importantly, Sheary, 26, gives the NHL’s worst team a proven winner. If the Sabres want to change their losing culture, they need more players like him.

In his first three NHL seasons, Sheary won the Stanley Cup twice. He has already played 57 playoff games, a number that ranks second on the Sabres to winger Jason Pominville’s 81.

“The experience that I had there will help me tremendously,” Sheary said on a conference call Thursday. “I think if I can just bring a little of that experience, the playoff experience to the locker room, try to change the culture, I think that’ll be a good thing.”

Sheary learned from some of the game’s best players in Pittsburgh, including center Sidney Crosby, a superstar whose work ethic complements his talents.

“He’s a lead-by-example (guy), just watching him on the ice and watching his work ethic, how he takes care of himself was a great learning experience for me,” Sheary said.

After the initial shock of getting traded wore off, Sheary said he quickly embraced what he believes can be a bright future.

The undrafted Sheary, of course, grew up with the Penguins, morphing from an unheralded AHL player into a significant contributor.

So when Penguins assistant general manager Bill Guerin called Sheary on Wednesday to inform him he had been traded to the Sabres with defenseman Matt Hunwick for a conditional 2019 fourth-round pick, he was shocked.

“I didn’t really see it coming,” Sheary said. “There’s obviously rumors out there that it might happen.”

But Sheary said he understands at some point you must move on. He believes the Sabres offer him an opportunity to grow as a player.

“You have to look at the positives,” he said. “I’m super excited with the new chapter I have in my life. I have to put my Pittsburgh years behind me now. I’m definitely excited for this opportunity.”

He added: “They have the pieces in place in these young players and players that have potential, then we can build around them. I think that’ll pay off for us.”

Sheary is familiar with Eichel and defenseman Rasmus Dahlin, perhaps the Sabres’ two biggest pieces. Like Eichel, Sheary grew up outside of Boston, although they don’t know each other.

“When you’re playing with a guy like that, you got to try to get him the puck as much as you can,” he said. “I think a big part of my game is creating turnovers and getting chances for my linemates.”

Sheary believes that style has contributed to his even-strength scoring prowess.

Sabres general manager Jason Botterill, having signed Sheary to an AHL contract when he was Pittsburgh’s associate GM, knows him well. Botterill’s presence only increases Sheary’s comfort with his new team.

“To have him on board is a huge help in my transition to Buffalo,” Sheary said.

In 2014, Botterill took a chance on the 5-foot-8 University of Massachusetts product when few others showed interest.

“I was obviously an undersized player,” Sheary said. “Being undrafted sometimes can hurt your stock a little bit. But when I signed my first pro contract in the American Hockey League, I was actually super excited that I was going to be able to play another year.

“Then to get my first NHL deal and kind of prove myself a little bit, that’s kind of when I knew I could do this for a living.”