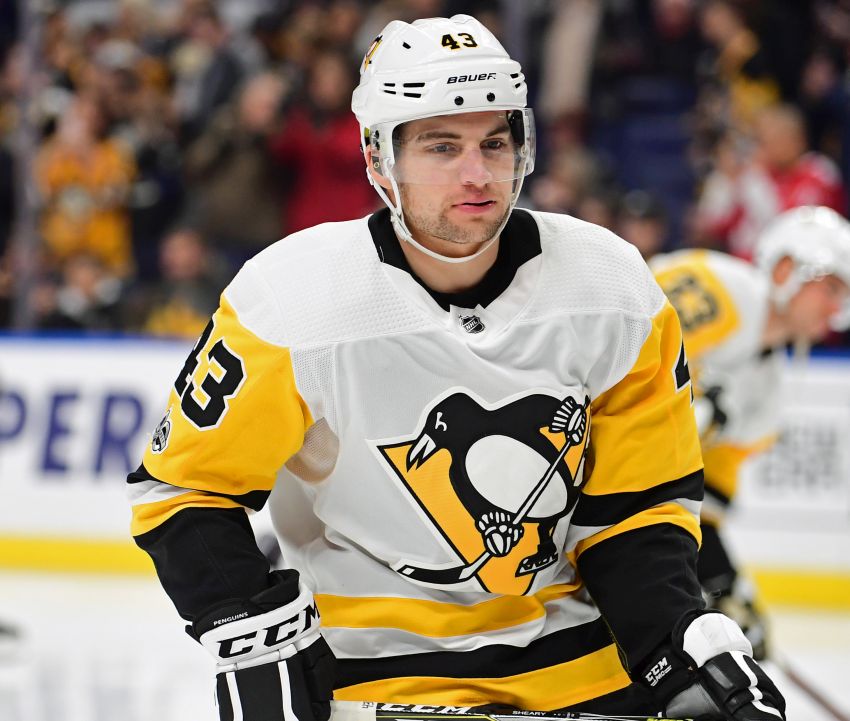 Today, Sheary, 26, has two Stanley Cups and 48 goals on an impressive NHL resume. But barely four years ago, he was an unknown just looking for a pro opportunity after playing four NCAA seasons at the University of Massachusetts.

The speedy Sheary, whom the Sabres acquired Wednesday with defenseman Matt Hunwick, quickly earned an NHL contract, scoring six goals in the AHL playoffs. Then within about a year he developed into one of the Penguins’ top wingers, often flanking superstar Sidney Crosby on the left.

In trading a conditional fourth-round pick in 2019, the Sabres addressed two needs: scoring on the wing and defense depth. The Penguins, meanwhile, cleared valuable cap space for free agency.

With the Sabres, expect Sheary to play beside No. 1 center Jack Eichel.

“Being a part of Pittsburgh’s organization there was a success story (with Sheary),” Botterill said inside HarborCenter, where the Sabres are holding development camp. “An AHL-contracted kid who performed very well in the AHL playoffs and then gets an opportunity to step into the National Hockey League and play with skilled players and help them win Stanley Cups. That’s what gets us excited about our situation here.

“He can … play with one of our offensive centermen, finish off chances from them, but also get in on the forecheck, get pucks to our centermen.”

The 5-foot-8, 175-pound Sheary can also score even-strength goals. The Sabres ranked last in 2017-18 in that category. Sheary has scored 44 times at even strength. Overall, he has 93 points in 184 NHL appearances.

“We knew that we had try to get more scoring from our wingers,” Botterill said. “What I always liked about Conor’s game was he’s played in playoff situations, he’s had success winning two Stanley Cups in Pittsburgh. I think especially even strength, he creates a lot of chances out there.”

Having played 57 playoff games and spent so much time beside Crosby, Sheary possesses valuable experience the Sabres sorely need.

“He knows how to play in pressure situations against other teams’ top defenders, top players,” Botterill said. “We’ve talked a lot about that here, bringing in players who have playoff experience. It’s why we were interested in bringing in (Marco) Scandella and (Jason) Pominville last year.”

In Hunwick, 33, Botterill said the Sabres acquired a veteran defender known for his professionalism and mobility on the blue line. After being selected in the seventh round, 224th overall, in 2004, Hunwick has played 521 NHL games for five teams.

“I’ve always been impressed from afar (with) how he’s handled himself, how he’s taken care of himself off the ice,” said Botterill, who, like Hunwick, played at Michigan. “(He’s) a late-round pick who found a way to play in the National Hockey League.”

The 5-foot-11, 200-pound defenseman has compiled 25 goals and 117 points since breaking into the NHL in 2007-08. He has also played for the Boston Bruins, Colorado Avalanche, New York Rangers and Toronto Maple Leafs.

Wednesday’s trade, of course, could be just the first Botterill pulls off. Most notably, they need a goalie.

“You have a ton of rumors right now on Ryan and I think a lot of them are very creative,” Botterill said. “I would just say, from Day One, we’ve been very happy with Ryan being a part of our group and we’ve said before that it’s no surprise that teams are calling (on) him.

“He has a great reputation throughout the National Hockey League and especially (with) what he’s accomplished in international hockey. So I understand why people call on it, but the validity of a lot of the rumors are simply untrue.”