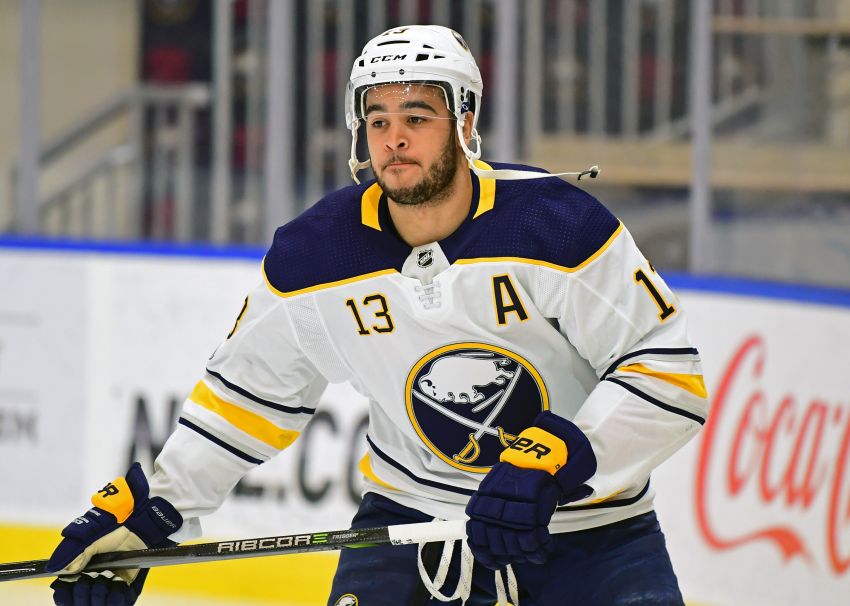 BUFFALO – Nick Baptiste sounds different this year, more confident in his abilities. The high-scoring winger talks openly about making the Sabres out of training camp.

A breakout AHL season can do that. So can earning your first 14 NHL games.

“I’m excited,” Baptiste said prior to Monday’s 5-3 loss to the Pittsburgh Penguins, the end of the Prospects Challenge inside HarborCenter. “I think it’s my year to crack the team. That’s my goal. It’s been my goal all summer. I’m confident in my abilities.”

Baptiste morphed into a stud scorer last season, his second as a pro, compiling 25 goals and 41 points in only 59 games with the Rochester Americans. Following an early-season recall, he often looked comfortable in the NHL, scoring three goals.

“It was exciting for me,” Baptiste said of getting summoned in October. “I had a good camp last year, earned a recall. I was able to contribute when I was up for that little stint there. It definitely gave me some confidence when I got sent back down to know that I can dominate at the AHL level.”

A year ago at this time, Baptiste acknowledged his 13-goal rookie season was a bit underwhelming. Now, the 2013 third-round pick said he’s “ready” for regular NHL duty.

Baptiste, a 40-goal scorer in junior, believes he can play up and down the lineup. During his last recall, he played with center Jack Eichel and Evander Kane, scoring an early goal.

“What I’ve been focused on for the last five months is working toward making this team,” Baptiste said. “So, no, it’s not pressure so much, it’s more you definitely know you got eyes on you to see if you’re ready to make the team. I’m just excited for the opportunity. I think I’ve done the right things this summer to make myself ready to make the jump.”

Right now, with returning regulars and established additions, the Sabres have 13 forwards. Still, if Baptiste, Bailey or Fasching wow during camp, they would almost certainly keep them over a veteran.

If Baptiste goes back to the AHL, he would be coached by Chris Taylor, an Amerks assistant during his rookie season. Taylor was fired in 2016 before new Sabres general manager Jason Botterill brought him back to be Rochester’s head coach.

Like some other youngsters, Baptiste feels a special comfort with Taylor, someone he called a “great players’ coach,” around again.

“Tail’s and I have a really good relationship,” he said. “We seem to work well together and he understands my game. He’s helped me tremendously just in terms of little things, not so much scoring goals, but … body language and stuff on the boards and defensive zone (play) – stuff that he knows is going to help me get to the NHL level. Obviously, I’ve proven I can score goals at the AHL level, but to play in the NHL, you got to be able to do things defensively.”

He added: “Rochester’s going to be in great hands with him.”