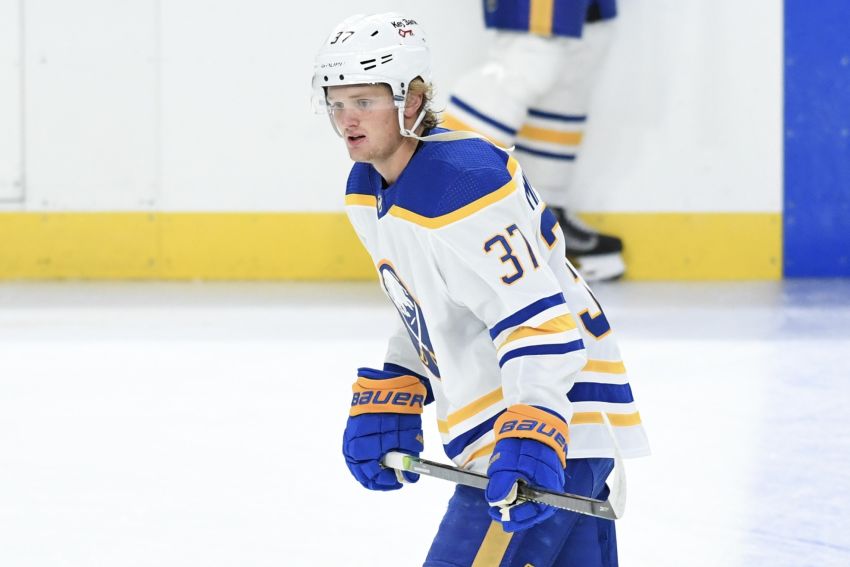 BUFFALO – When center Casey Mittelstadt returned home in the spring following the Sabres’ last-place finish, he forced himself to tune into the Stanley Cup playoffs every night.

Mittelstadt, of course, enjoys watching hockey. But some nights, he acknowledged, it “can be painful,” especially in the early rounds when lower seeds upset heavy favorites.

The Montreal Canadiens earned just 59 points last season, the lowest of any playoff team. So as Mittelstadt watched them stun the Toronto Maple Leafs and roar to the Cup final, it underscored something important.

“Just to get the chance to get in, seven games you never know what can happen,” Mittelstadt said Friday inside KeyBank Center. “So, yeah, there’s definitely things that we look toward. Obviously, that’s a goal of ours.”

Right now, the thought of the Sabres even sneaking into the postseason seems laughable. The rebuilding team has missed the playoffs an NHL record-tying 10 consecutive seasons.

Their roster, at least on paper, looks like the league’s weakest. Cheap journeymen free agents have replaced their top assets. Injured star Jack Eichel will possibly never play for the Sabres again.

Only one player active in training camp, winger Victor Olofsson, has had a 20-goal season in the past two years. No one else has scored more than 14.

“We don’t care,” Mittelstadt said of the meager predictions. “They can say whatever they want. We’re all here, we know what we have.”

Mittelstadt, 22, believes the Sabres have “a huge quiet belief in our group.”

The American, the eighth overall pick in 2017, sounds refreshed and hellbent on proving doubters wrongs. He understands he and other members of the Sabres’ so-called “new guard” have an opportunity to lead the team’s revival.

Clearly, Mittelstadt’s rapid development down the stretch last season – he compiled nine goals and 17 points over the final 22 games – buoyed his confidence. He morphed into a first- or second-line center after coach Don Granato took over, seizing his opportunity.

Remember, Mittelstadt started last year on the taxi squad and received most of his early action as a third- or fourth-line winger. Two seasons ago, the Sabres demoted him to the Rochester Americans and he played his final 36 games in the AHL.

The genesis of Mittelstadt’s turnaround can be traced to his productive offseason in 2020. Last season, he acknowledged earlier in his career he had taken his spot “for granted a little bit.”

“You can’t get comfortable,” Mittelstadt said Friday. “Got to go home and have the same mindset that I had last year and go from there. It was definitely a better summer I think for my attitude and overall wellbeing.”

Granato said Mittelstadt has reaped the fruits of his labor.

“Now he sees it so it’s a whole other level of confidence, I think, for any player,” Granato said. “And I believe that’s what you see in Casey now. He knows what he’s doing, it’s kind of been validated. All that work, all that focus he’s put in and sacrifice he sees the rewards, so he did more of that this summer expecting more, and I think that’s the right way to go. I think he’s in a position, he can take advantage of that.”

Mittelstadt understands he must keep evolving. As a top-line center, he will often face the opponent’s best players. He must develop into a two-way presence.

As he watched the playoffs, he studied the action. He learned how some of the Tampa Bay Lightning’s star forwards – he mentioned Nikita Kucherov, Brayden Point and Steven Stamkos – can transform their styles.

“He was like, ‘We need one of those,’” Cozens said. “We all have that vision and we all believe that it can come true.”

Notes: Team Blue won defeated Team Gold 5-1 in Sunday’s scrimmage. The game featured two 20-minute periods, a five minute three-on-three and a shootout. … Sabres development coaches Tim Kennedy and Nathan Paetsch officiated the scrimmage in full referee uniforms. … Granato on defenseman Rasmus Dahlin having the green light to move the puck: “We’re hoping he has a yellow light, too,” he cracked. … Granato said defenseman Jimmy Schuldt, who hasn’t skated in camp yet because of undisclosed reasons, will start practicing Tuesday.