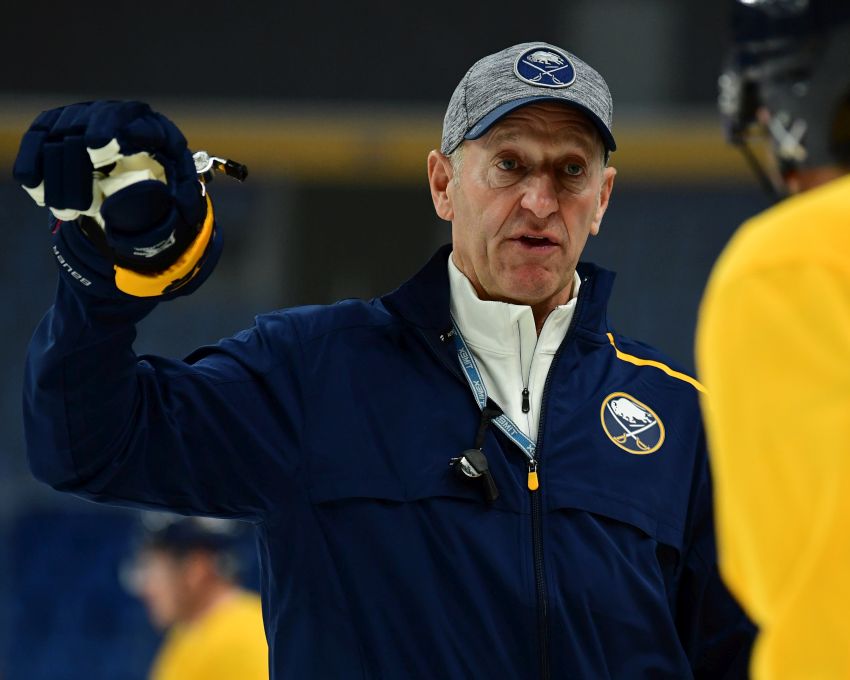 PITTSBURGH – Kyle Okposo figures they spent 10 minutes talking about hockey. For most of the evening, the three Buffalo Sabres veterans dining with their new coach, Ralph Krueger, discussed their backgrounds and families.

The sport that consumes so much of their lives didn’t come up much.

“We barely talked about hockey,” Okposo said of the get-together.

When the Sabres hired Krueger on May 15, he hadn’t coached in the NHL in six years. He knew very little about his new players, and they knew next to nothing about him.

So as the affable Krueger started getting to know the Sabres last spring, he invited Okposo, Zach Bogosian and Carter Hutton out to eat.

Okposo had heard some positive things about Krueger from a few players familiar with him. But the dinner helped Okposo learn more.

“You realize that he’s such an interesting guy, (has) an interesting background and a lot of unique experiences that you don’t hear a lot about in the hockey world,” Okposo said. “So it helped out a lot.”

Tonight’s season opener against Penguins, the start of the Sabres’ 50th anniversary campaign, will be Krueger’s first game behind an NHL bench since April 27, 2013.

This is only his fourth year coaching in North America. He spent just one lockout-shortened, 48-game season as the Edmonton Oilers’ coach. He was also an Edmonton assistant for two years.

Krueger, 60, made his name coaching overseas, mainly with Switzerland, whose Olympics upset of Canada at the 2006 Torino Games ranks among the biggest ever.

After the Oilers fired Krueger, he spent five years in England as chairman of Southampton F.C., an English Premier League soccer team.

The Winnipeg native probably owns the most unique resume of any NHL coach.

So Okposo and the others listened to Krueger intently that night in Buffalo.

“We were more like in awe, kind of, of what he was saying about the Premier League and how it was ran,” Okposo said. “It was just really, really cool to get his experiences out there.”

Krueger can certainly command a room. His leadership and communication skills made him an attractive coaching option despite the time he spent away from hockey and his limited NHL experience.

But just days into training camp, Okposo said Krueger had already established a strong presence as a leader.

“You know that he’s in charge and you do what he says,” Okposo said.

“He’s so positive … upbeat and eager to get this thing going,” Miller said. “His excitement is contagious.”

Sabres captain Jack Eichel said: “The environment he’s created and the mood he’s created every day, I think guys feed off of it.”

Krueger’s ability to communicate on different levels has earned his players’ respect. He takes an interest in their lives outside of hockey.

“A lot of times people come into this business and it’s just hockey, hockey, hockey, hockey,” Okposo said. “Some people forget that you’re people, too, and you have families, you have lives. He’s definitely not one of those guys. He’s just a well-rounded person.”

That makes Krueger more approachable than many coaches.

“He’s the type of leader and a person that you have respect for but you’re not afraid to talk to,” Sabres goalie Linus Ullmark said. “You have head coaches that are very respectful and (take) a lot of pride in their coaching and all that, and when you try to talk to them it feels like you don’t really reach out to (them), you’re not really talking to that person.

“With Ralph, I really feel like when he’s a coach he’s a coach. But if you want to talk to him about whatever – if it’s social, if it’s family, if it’s hockey – he can always change his personality to match your question, which is really nice.”

The clear lines of communication helped Krueger establish his program for the Sabres. He said he came to town with a framework but not a “clear plan.” He sought feedback from his players.

Krueger said Okposo, for example, spoke honestly “about the journey the team had been on psychologically” and what needed to change.

“Every single drip, drip, drip piece of information I was able to get from people through the summer helped to set up the camp and set up the process as we’ve now executed,” Krueger said.

The Sabres, Krueger said, have embraced the style he wants to play.

The new system, according to Okposo, is “pretty simple.” Instead of being overwhelmed with information and feeling robotic, the players can rely on their instincts.

“There’s not a lot of thinking,” Okposo said. “It’s more just go. If you’re unsure, you have guys around. It’s nice that you can get back to kind of using your instincts.”

Krueger’s instincts tell him the Sabres are prepared. When he walks out on the bench tonight at PPG Paints Arena, he said he won’t feel any nerves, just excitement.

“We feel the process has gone as smoothly as possible,” Krueger said. “So I have to tell you, honestly, I’m going quite confidently onto that bench.”