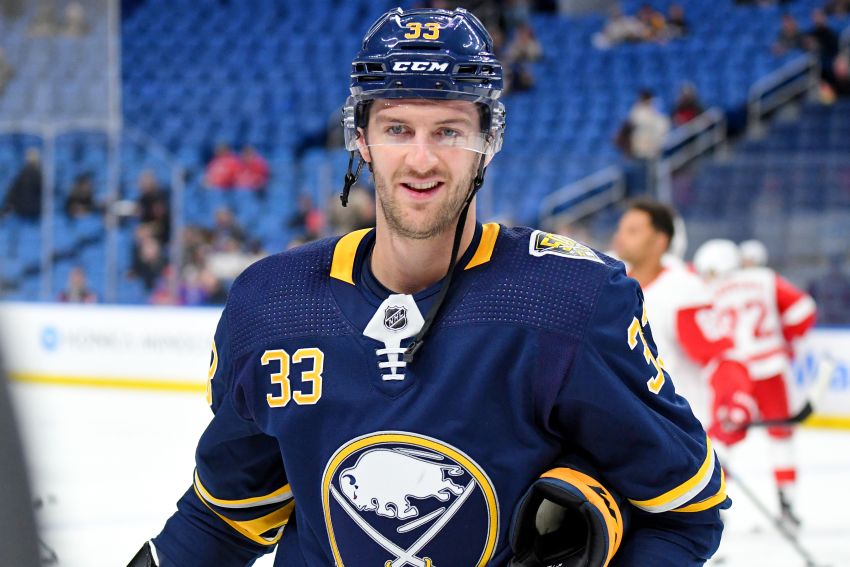 Colin Miller has regulary been a healthy scratch this season. ©2020, Micheline Veluvolu

In mid-November, the Sabres started scratching their biggest offseason acquisition, and he sat out 16 of the next 32 games, never playing more than four straight contests.

But Miller, 27, has been performing better since the NHL All-Star break ended, displaying “confidence playing within our principles,” coach Ralph Krueger said.

Not surprisingly, that has generated Miller, whose Sabres host the Columbus Blue Jackets tonight, more ice time and offensive chances.

“When you’re in and out of the lineup and all that, it can be hard to kind of find that consistency,” Miller said following Wednesday’s practice inside KeyBank Center. “I don’t think that’s an excuse. You still got to play well and play your game. But I think it’s definitely easier when you have those reps kind of back-to-back-to-back and you’re not missing them.”

Miller skated a season-high 22 minutes, 24 seconds on Feb. 6 and pumped a season-high five shots on goal Saturday afternoon. He registered an assist in two straight games last week for the first time since early October.

“Offensively, he’s much more relaxed of late, and we can see his offensive upside, which is something we definitely need to do again against a team like Columbus,” Krueger said. “We just didn’t create enough the last time we played them here (Feb. 4, a 2-1 overtime win). We need those skill players like Colin to be able to step up into those spaces and have some deception and add to our offensive power now that we’re understanding what we need to do defensively.

“It’s the offense that needs to grow out of that, and Colin is one of those players that can definitely help our offense create more opportunity.”

Youngster Lawrence Pilut has been sitting out games with veteran Zach Bogosian.

“We still got eight defensemen – eight good defensemen – on this team,” Miller said. “I think it was figuring out pairings and all that stuff. It’s not an easy decision for Ralph to be in, so I understand that.”

Miller has sometimes been the odd man out when the Sabres use seven defensemen.

“The healthy scratches have hurt his confidence,” said one scout who has watched Miller regularly over his career, including this season. “(He) is probably wondering where he fits in the organization’s plans.”

“I like playing with him,” Dahlin said. “You learn to play with everyone, so it doesn’t really matter who you play with, but Colin especially, he’s a very good shooter, he’s passing the puck quite well, skating well. So we compare to each other good.”

Dahlin, 19, is one of the NHL’s most dynamic young stars. His abilities could certainly help Miller unleash some of his offensive talents.

Miller possesses a lethal shot that ranks among the game’s elite. He compiled 10 goals and 41 points in 82 games in 2016-17 and three goals and 29 points in 65 appearances last season.

He has only recorded one goal and nine points in 41 outings this season. He also endured a 15-game point drought earlier this season.

“He is an offensive defenseman with a heavy shot,” the scout said. “(I’m) not sure why (the Sabres) have not deployed him more in this role.”

He added: “(It) has been somewhat of a head-scratcher for me the way they have used him this season.”

Miller has started only 47.1% of his even-strength faceoffs in the offensive zone this season, according to hockey-reference.com. In his first four seasons that number was at least 61%.