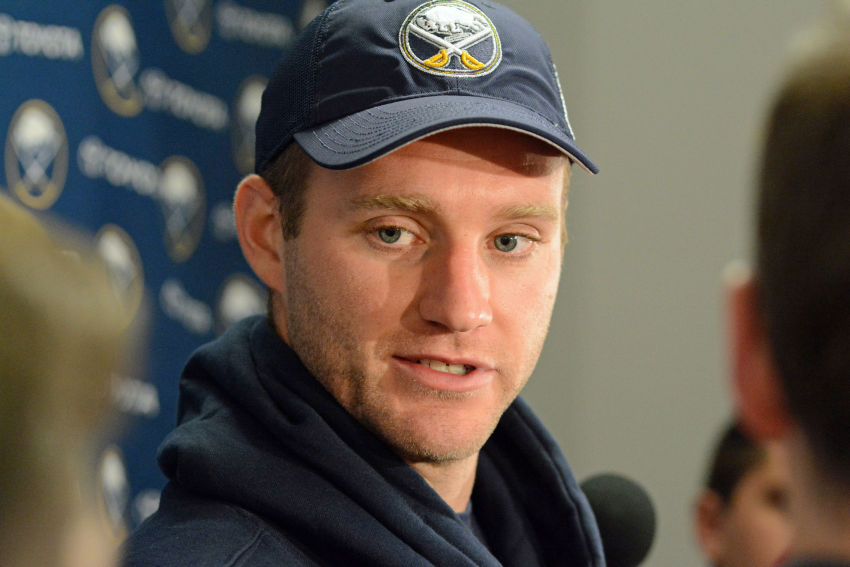 BUFFALO – After signing three straight one-year contracts, Cody Franson figured he could finally ink a multi-year deal in free agency this summer and enjoy some job security. After all, the Sabres defenseman has quietly scored 97 points in the last three years, including a career-high 36 last season.

Franson, 28, talked to some teams at the NHL Draft and again early when the market opened July 1. But within days, teams stopped calling. Over the course of two long months, teams would suddenly start contacting Franson before things quickly quieted down.

“It made for a bit of a long summer,” Franson said this morning inside the First Niagara Center after signing a two-year deal worth $3.325 million a season, according to multiple reports.

All along, however, Sabres general manager Tim Murray, who wanted to add another veteran defender, was texting Franson’s agent every day. Murray, unlike other teams, could offer two years and big money.

Eventually, Buffalo’s deal was too good to pass up.

“We went into free agency hoping for a long-term deal,” Franson said. “This year’s free agency was a lot different than in the past. I don’t think that’s going to change until the dollar goes back up to par or we expand. Once we kind of wrapped our heads around (we started) exploring some other options. That was a bit of a tougher transition.

“You go from a number of one-year deals in Toronto to trying to put yourself in a position to be able to get some security, to have everything kind of change was a little disheartening at first. When you start looking at the other options, you start getting excited about at certain situations, and this was one of them for me.”

The 6-foot-5, 213-pound Franson should anchor a point on the power play and skate strong minutes as a second-pair defenseman.

“(He should) certainly help us on the power play with his shot,” Murray said. “He’s a skilled defenseman. Obviously, a big body. We know that he’s not a crasher-and-banger, and that’s not what we signed him for. But he’s got some range. He’s got a long reach.”

Check back later for more on Franson.

In other news, Sabres center Ryan O’Reilly’s impaired driving case in Lucan, Ont., has been put over until Oct. 1, according to CFPL-AM.

O’Reilly, 24, was arrested July 9 and charged with impaired driving and leaving the scene of an accident after his pickup truck allegedly hit a Tim Hortons. He signed the biggest contract in Sabres history – a seven-year, $52.5 million extension – July 3.

Murray said he isn’t worried about the case taking long.

“That’s what we do in Canada,” he said. “We remand, we remand and we remand. The lawyers get paid. As long as the end result is what he believes is the truth to be and what we’ve been told. Would it have been better that it ended on August 10 or today? Maybe, but as long as it’s done right versus done in a speedy fashion, I’m fine with it.”

Murray said O’Reilly was “as disappointed as any of us.”

“We were disappointed here,” he said. “Our fans probably were disappointed. He was legitimately distraught over it and disappointed, and he made some mistakes that he’s owned up to with us, that … what has been reported and what is the truth, we’ll see what the discrepancies are. He says there are some discrepancies, so he’ll have his day in court. Hopefully, it’ll get resolved to the point where it doesn’t affect his travel or his ability to play for us, and I am confident that will be the case.”