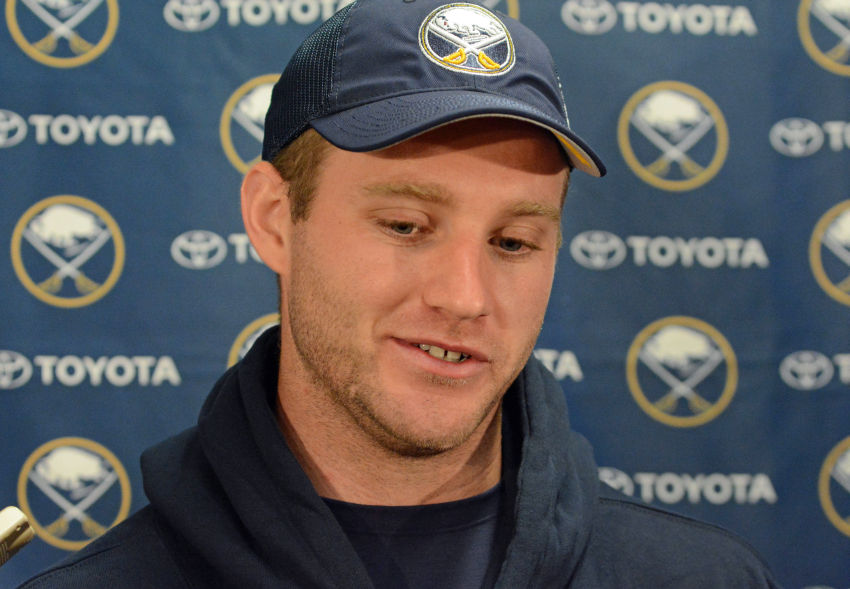 BUFFALO – After signing three straight one-year contracts, Cody Franson figured he could finally land a multi-year deal in free agency this summer and enjoy some job security. After all, the new Sabres defenseman has quietly scored 97 points in the last three years, including a career-high 36 last season.

Franson’s camp talked to some teams at the NHL Draft and again early after the market opened July 1. But within days, teams stopped calling. For more than two long months, clubs would suddenly start contacting Franson and quickly stop.

“It made for a bit of a long summer,” Franson said Thursday inside the First Niagara Center after signing a two-year deal worth $3.325 million a season, according to multiple reports.

All along, however, Sabres general manager Tim Murray, who wanted to add another veteran defender, was texting Franson’s agent every day. The two, Murray said, got to know each other “intimately.”

Murray, unlike other teams, could offer two years and big money. Buffalo’s deal was ultimately too good to pass up.

“We went into free agency hoping for a long-term deal,” Franson said. “This year’s free agency was a lot different than in the past. I don’t think that’s going to change until the (Canadian) dollar goes back up to par or we expand. Once we kind of wrapped our heads around that (we started) exploring some other options. That was a bit of a tougher transition.”

At first, Franson said, “to have everything kind of change was a little disheartening.” He wanted a long-term contract badly. But when he examined his options, he realized he had some exciting opportunities.

With Buffalo, the 6-foot-5, 213-pound Franson, a right-handed shot, should anchor a point on the power play and skate big minutes, possibly as the third or fourth defenseman. The Sabres desperately need offense, especially from the blue line. Only two other defensemen, Zach Bogosian and Carlo Colaiacovo, have ever had a 30-point season. The Sabres’ power play ranked 30th last season and 29th in 2013-14.

“(He should) certainly help us on the power play with his shot,” Murray said about Franson. “He’s a skilled defenseman. Obviously, a big body. We know that he’s not a crasher-and-banger, and that’s not what we signed him for. But he’s got some range. He’s got a long reach.”

Clearly, Franson’s 28-game return to Nashville, where he played from 2009-11, hurt his stock. He did little after the defense-rich Predators reacquired him from the Toronto Maple Leafs last season, compiling one goal and six points.

Franson, 28, said that poor run created a chip on his shoulder.

“I have nothing but great things to say about Nashville,” he said. “They’re a great organization and a great city and great fans and great place to play. Unfortunately, it wasn’t a good fit this time around. They brought me in having kind of three guys that could work the right side, play the power play, and that’s one of the things I try to take a lot of pride in.

“But from playing an important role in Toronto to more of a depth role, it was a big adjustment, just wasn’t quite the right fit.”

Murray had said he wanted lefty defenseman, but given Franson’s talents, he doesn’t seem to care. The Sabres have four righties and three lefties among the seven defensemen who should make the team.

Franson will likely have to play on the right side. He struggled on the left when he first joined Toronto.

Ironically, Franson could be partnered with Josh Gorges during the upcoming season. Early in the 2014 offseason, the Montreal Canadiens wanted to trade Gorges to Toronto for Franson, his next-door neighbor in British Columbia. Gorges nixed the trade.

“Now we’re getting a chance to play together,” Franson said. “I can’t wait to get this going.”