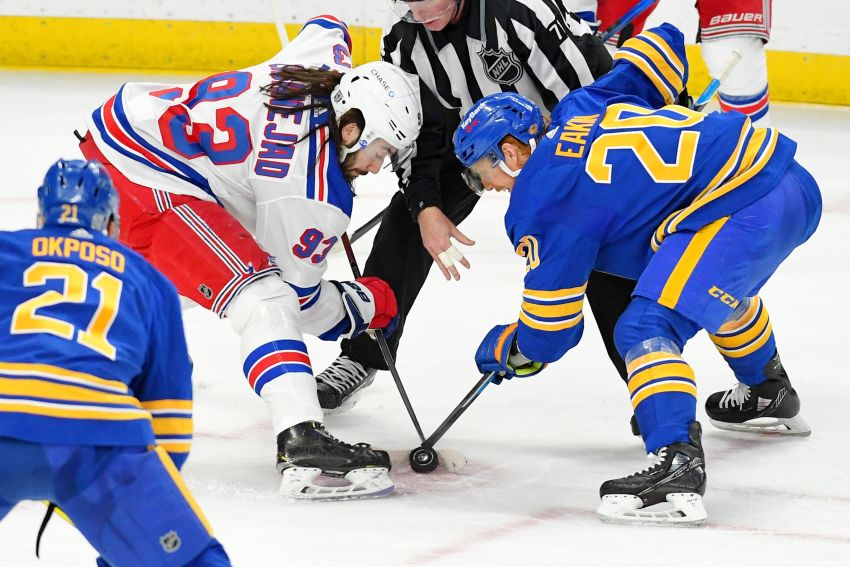 BUFFALO – With 33 seconds remaining Tuesday and the Sabres clinging to a one-goal lead against the New York Rangers, coach Ralph Krueger sent out center Cody Eakin to take a critical draw in his own zone.

Eakin has quickly become a trusted faceoff specialist, winning 59.4% this season. With winger Taylor Hall serving a boarding penalty and goalie Alexandar Georgiev on the bench for an extra attacker, the Sabres desperately needed the puck.

Captain Jack Eichel’s first goal, of course, received most of the attention following the game, and why wouldn’t it?

Eichel, despite having seven assists, hadn’t scored this season. His second-period goal, his first in more than 10 months, held up as the winner.

But Tuesday’s victory featured contributions from up and down the lineup. Four low-profile veteran newcomers played critical roles.

In recent seasons, many of the Sabres’ offseason additions have flopped or performed well under expectations. The term “Sabre-ized” has become part of the local hockey vernacular. Players arrive in Buffalo and suddenly stop producing.

Not this year. Consider what the Sabres, who host the Rangers again tonight at KeyBank Center, have already received from some of their new additions:

“After all that time off, the work he’s been doing, being that seventh D for so long,” Krueger said on a Zoom call following the game. “He stepped up with an outstanding game today, and that’s exciting to see when you bring a guy like that off the bench.”

– Winger Riley Sheahan has won 23 of his 29 faceoffs – a staggering 79.3% – including a critical defensive-zone draw with 97 seconds left Tuesday and the Sabres in a six-on-four situation.

Sheahan, 29, has registered one goal and two points and helped solidify the Sabres’ best fourth line in years by moving from center to the right side. He also kills penalties.

– Winger Tobias Rieder scored a nifty breakaway goal Tuesday, tying the game two seconds after a penalty expired. Rieder, 28, has scored two goals and skates beside Eakin at even strength and as a penalty killer.

– While Eakin, 29, is pointless, he has anchored the third line and helped the Sabres improve their penalty killing, which ranked second-worst in the NHL last season.

His faceoff percentage stands second on the team behind Sheahan. Eakin, who signed a two-year, $4.5 million contract, is the only one of the four who has a multi-year deal worth more than $700,000.

“We’ve gotten key contributions from different guys,” said center Eric Staal, an offseason acquisition who has a three-game point streak. “You saw that yesterday with Eaks taking some huge faceoffs, Rieder obviously had a big goal, a good defensive effort to finish the game (Tuesday) with some key guys making great plays. That breeds confidence.”

So what has helped the new faces acclimate so quickly? Krueger said they’ve joined a “group that is already built on good people.”

“First of all, everybody’s having fun in the right way,” he said Wednesday. “Fun means you’re not always smiling. You’ve heard me speak about that before. It means that there’s an honest, hard work going on in the environment.”

“We have such a good group of guys and we have so much fun,” Lazar said. “We’re so close and we’re tight with each other. Coming after such a lengthy layoff (because of the COVID-19 pandemic), we’re excited to be back together and we welcome them with open arms.

“Their personalities have nothing but added to our dressing room and added results, too.”

Krueger said he and rookie general manager Kevyn Adams targeted character role players in the offseason who would embrace their responsibilities. Last season, they had too many players wanting too much.

‘We really felt on the defensive side we were weak last year,” Krueger said. “As an example, we might’ve had up to 10 players in a lineup at any time where pretty well all 10 wanted to play the power play. Whereas now, we have real clear role definition within the group where everybody embraces the role that they have and is proud of that and carries it out with that kind of diligence, preparation.”

Eakin has noticed how much the Sabres prepare before going on the ice.

“Attention to detail in meetings transitioning onto the ice is huge,” he said.

Krueger said: “They’ve been unbelievable students at our meetings. They’re asking excellent questions, they reach out to the coaches permanently to deepen the knowledge base, and all that is leading to what you’re seeing right now.”