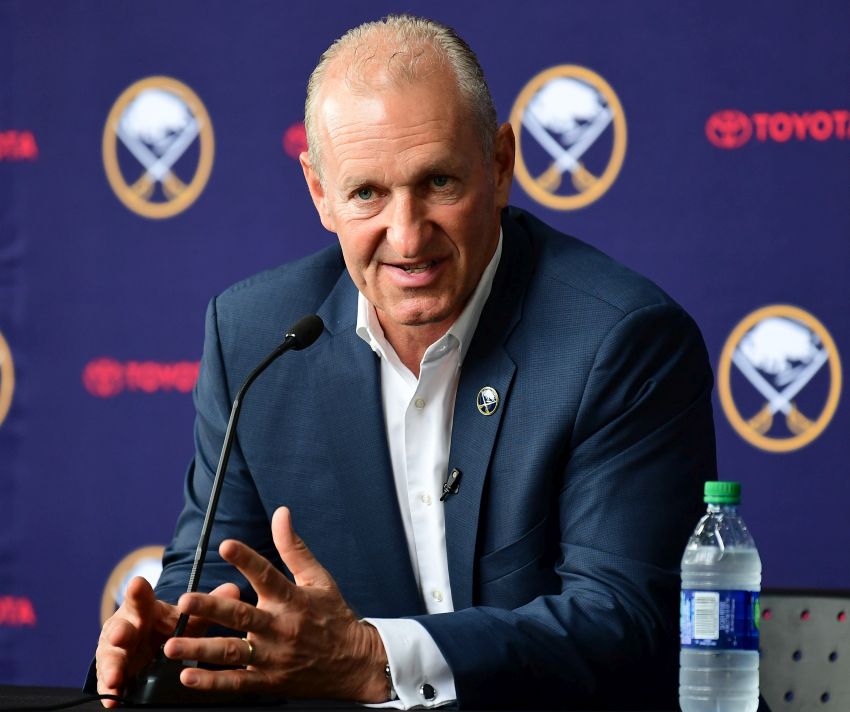 Ralph Krueger takes an interest in his players. ©2019, Hickling Images

BUFFALO – Marcus Johansson hung up the phone and wanted to join the Sabres. Sure, signing with them would offer him a significant role as a top forward and an annual salary of $4.5 million.

But something else lured Johansson, 28, to the Sabres as a free agent: new coach Ralph Krueger.

“It was just my impression from speaking to (Krueger),” Johansson said this morning after training camp opened inside KeyBank Center. “So it was a good phone call. We spoke not just about hockey. So I liked what I heard a lot. It made me want to come here.”

Krueger, 60, spent one abbreviated season as an NHL head coach in 2012-13. He just finished a five-year run as president of South Hampton F.C., an English soccer team.

He possesses perhaps the must unique resume of any NHL coach.

Other than three seasons with the Edmonton Oilers – two as an assistant before a 48-game stint in charge – Krueger had spent his entire coaching career in Europe. He last coached with Team Europe at the World Cup of Hockey in 2016.

Still, Krueger impressed some players – “Not just as a hockey coach,” Johansson said – who likely knew little or nothing about him before the Sabres hired him May 15.

The calls Krueger made during the offseason showcased his unique personality and helped him earn respect.

“I really like the idea I got from him just being a good person, a good leader, not just what he wants to do hockey-wise,” said Johansson, who signed a two-year, $9 million contract July 6. “I think, to me, that’s important that it’s a good person, that it’s someone who wants well for everyone. I think that’s what Ralph stands for.”

Sabres captain Jack Eichel said: “I’ve had a really good first impression of him and I haven’t heard anything but great things about him.”

“He’s a really good man,” Dahlin said. “He’s a lot about (getting) to know you as a person, so that’s basically what we have done now the couple last days.”

He added: “He’s not like a traditional coach so that’s something new.”

That’s probably refreshing for some Sabres.

“Our conversations have been great,” Eichel said. “A lot of them have been about hockey, but we’ve really gotten to know each other, I think. He’s very personable. He wants to know you as a human being, he wants to know about your family, your likes and dislikes away from the rink. I think he cares a lot about everyone.

“Beyond that, he’s very organized. I think he knows what he wants. He’s very thorough. He’s been very impressive so far. It’s been great getting to know him.”

The passion Krueger has relayed to the Sabres “can become contagious,” winger Jeff Skinner said.

“It’s pretty unique thing as a player seeing a guy that passionate, that excited to sort of get going,” Skinner said.

Eichel said: “He brings a great energy to the rink, a lot of positivity from him. I think he’s super excited and I think that makes the guys excited. I think just talking to him, his plans and his mindset, I think it’s really good. I think all the guys have responded well to it.”

Notes: Johansson said all of the Swedes on the Sabres – eight are listed on the roster – had dinner together Wednesday. “It’s always fun to hang out with the guys from back home and talk your native language and all that,” he said. “I think it makes you feel comfortable. It kind of makes you feel more like home, too.” … The Sabres will hold their first sessions of camp Friday from 10 to 11:15 a.m. and 1 to 2:15 p.m. at KeyBank Center. … Only three camp sessions – Sunday at KeyBank Center and Sept. 26 and 27 at Harborcenter – are open to the public.