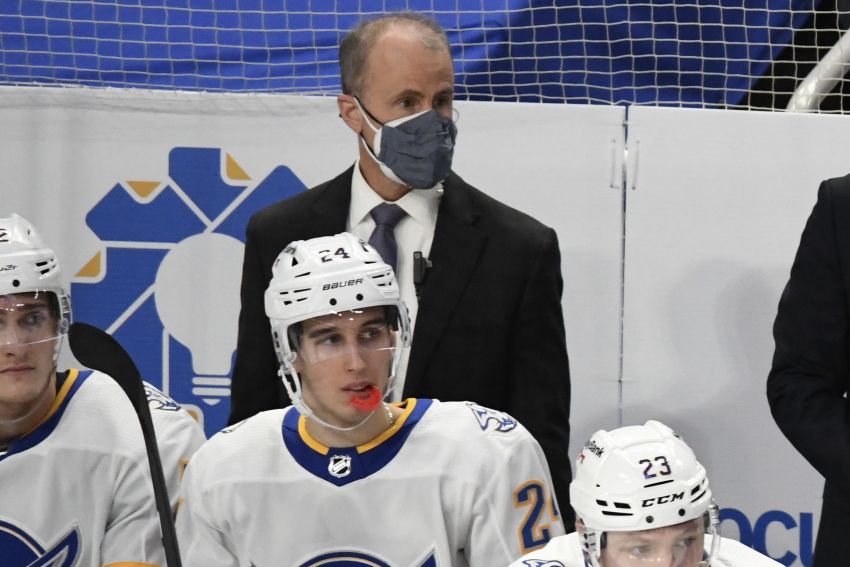 Don Granato quickly learned about the passion for the Sabres. ©2021, Micheline Veluvolu

It was Sept. 1, 2019, and Don Granato, one of the Buffalo Sabres’ new assistant coaches, was wandering the halls of Park Country Club in Williamsville looking for the banquet room.

Granato had been invited to the team’s annual alumni golf outing, and before everyone hit the course, they gathered for a meeting. When Granato found the room and sneaked in through a back door, the number of alumni in attendance shocked him.

“I said, ‘It’s more than a golf outing. It was an event,’” Granato said on a Zoom call Thursday to discuss his hiring as the Sabres’ permanent coach. “They’re all in chairs, somebody from the NHL is speaking up front.”

Right away, Granato said he could feel some of the alumni sensed an “unidentified” person had walked into the room.

Then Rob Ray, the ex-Sabres tough guy and alumni president, walked over and put his hand on Granato’s shoulder.

“At this point I feel like I’m wearing a Boston Bruins jersey as I walk in,” Granato said. “And he leans over and he says, ‘Can I help you?’”

When Granato introduced himself, Ray took his hand off his shoulder.

“I felt a little more safe,” Granato said. “And he said, ‘Oh, Donnie, welcome, welcome.’ And I felt welcomed right away.”

Granato said he remembers the feeling like it was yesterday. Among all those ex-Sabres – “Guys who had blocked shots and sacrificed and their families sacrificed, took punches to the face to be a Sabre,” he said – he felt like he did not belong.

“You could see the pride and sense that they still had (it) even as I walked in that room,” he said.

When Granato took over as interim coach March 17, he said he wanted to instill that kind of pride back in the Sabres.

“That was on the core of everything that I wanted to try and bring to our team, to find a way to try and get our players to experience something like that, to play for something greater than just themselves,” he said. “I believe we were able to do that with some great, great leadership, with some great passion, with lots of potential.”

Passion, of course, has been lacking at times during the Sabres’ embarrassing 10-year run of futility. General manager Kevyn Adams has often spoken about establishing a culture in which everyone across the organization take pride in representing the Sabres.

Three of the Sabres’ best players – disgruntled captain Jack Eichel, center Sam Reinhart and defenseman Rasmus Ristolainen – could be traded this summer because they appear to want out.

“So we have an obligation, I feel an obligation that we have to get people here that thrive on that situation, and we have a lot that are already doing just that.”

Granato said it’s easy to feed off the support from the community.

“What we have in Buffalo is special, and they love that,” he said of his players. “I know our group last year had such a pride for the city and the community and playing hockey here and putting a jersey over their shoulder.”

My thoughts on why hiring Don Granato is the right move for the #Buffalo #Sabres, why trading Jack Eichel seems inevitable (and should be done) and more:https://t.co/EAPA79X1GQ pic.twitter.com/XPJxOexwI0