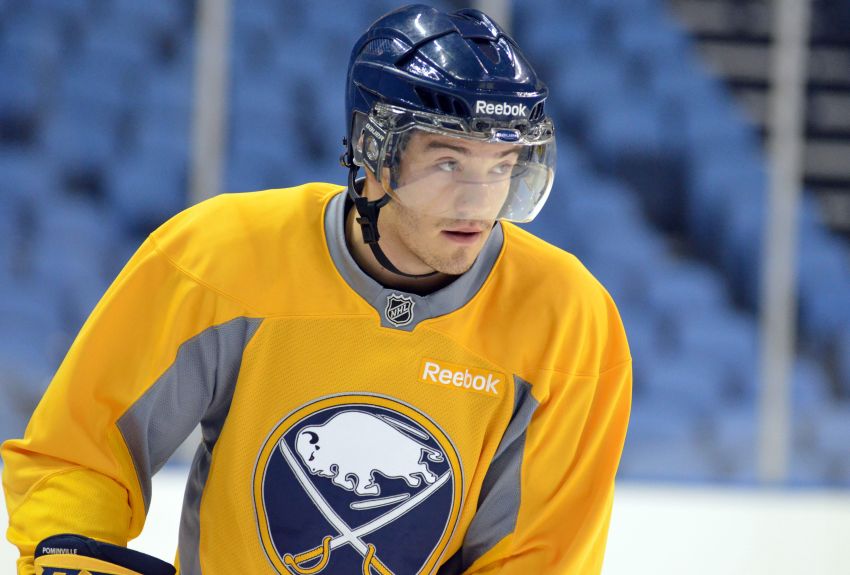 BUFFALO – Sabres prospect Eric Locke possesses a “rocket” shot so quick and lethal it reminds his coach of a former NHL teammate.

Which one? The greatest goal scorer Greg Gilbert ever played with.

“Brett Hull, to be honest with you,” Gilbert, Locke’s junior coach with the Saginaw Spirit, said by phone earlier this week. “I mean, Hully was special, there’s no question about it. But Eric’s got that potential. He’s got that quick release. He’s low to the ice. He goes through the shot. He scored goals for us this year from just inside the blue line over the goalie’s glove. The goalies didn’t move.”

Said Sabres prospect Justin Kea, Locke’s center much of last season: “He can shoot like I’ve never seen before.”

Like Hull, Locke’s also listed at an undersized 5-foot-10. For now, the similarities end there.

Hull, Gilbert’s teammate in St. Louis in the mid-1990s, scored 844 total NHL goals, including a notable one 14 years ago in Buffalo.

For Locke, the 189th pick on June 30 and the last of the Sabres’ 11 selections, just making the NHL would be notable. Very few seventh-rounders crack the big leagues. In the past 20 years, only two – Paul Gaustad and Nathan Paetsch – have played regularly in Buffalo.

The Sabres couldn’t pass on Locke, whose 44 goals and 97 points in 68 games both ranked fourth in the Ontario Hockey League last season. In addition his scoring prowess, the 19-year-old winger has “got some grit to his game,” amateur scouting director Kevin Devine said.

“With those kind of numbers, the coach says, ‘You never know, he might find a way,’” Devine said. “At that point, we hadn’t (drafted) any high offensive players. So we took a shot at him in the seventh round.”

Locke, an invitee to the Sabres’ pre-draft combine, never received an opportunity in 2012. Despite compiling 20 goals and 40 points as he battled injuries, teams passed on drafting him. Locke said he was “beat up” and “just never really found a groove” in 2011-12, which he split between the Barrie Colts and Saginaw.

“Last year was kind of the complete opposite,” Locke said last week following a session of development camp inside the First Niagara Center. “I had a great year, great teammates, great coaching.”

Of course, size could’ve been an issue for NHL clubs, but Gilbert believes no one should worry.

Locke added: “Some people think size matters. But it’s really about how hard you work.”

“They’re not big players, but they compete their backsides off,” Gilbert said. “That’s what Eric does. He just competes, and he’s got skill. He’s not afraid to go in the tough areas to score the goals and finish checks. (It) comes into one package. It might not be a 6-foot-5 package, but it’s in a package, and that’s what people want.”

Locke calls himself “an energy player.”

“Not only am I scoring from shots and whatnot, but I’m getting in the crease and getting those gritty goals as well,” he said.

Locke wasn’t the only gritty presence scoring for Saginaw, though.

What happened? The 19-year-old began effectively utilizing his size. Before he moved up to the OHL, Kea could get away with things on the ice because he was bigger than the competition.

“You start playing against bigger, stronger, older guys, you’re not able to do that,” Gilbert said. “So you got to sort things out and how you have to play and what’s the best style for him to play.”

Gilbert said Kea’s “not going to be a Mario Lemieux.”

“He’s going to be a straight-ahead power centerman,” he said. “He’s got the ability to score goals. I think that’s going to come. He’s got to keep working on skills.”

“I think my first couple years I was just worrying too much about points, and then my third year last year, I just kind of started playing, having fun and enjoying the game, working a little bit harder and trying to play more of a power forward role,” Kea said. “The points just came along fast. I felt something work for me. I just kept doing it.”

Kea will return to Saginaw next season. Right now, the Sabres plan to sign Locke and put him in Rochester. He feels he’s ready for the AHL.

“I showed I could dominate the OHL level,” Locke said. “I’m just looking forward to the opportunity.”