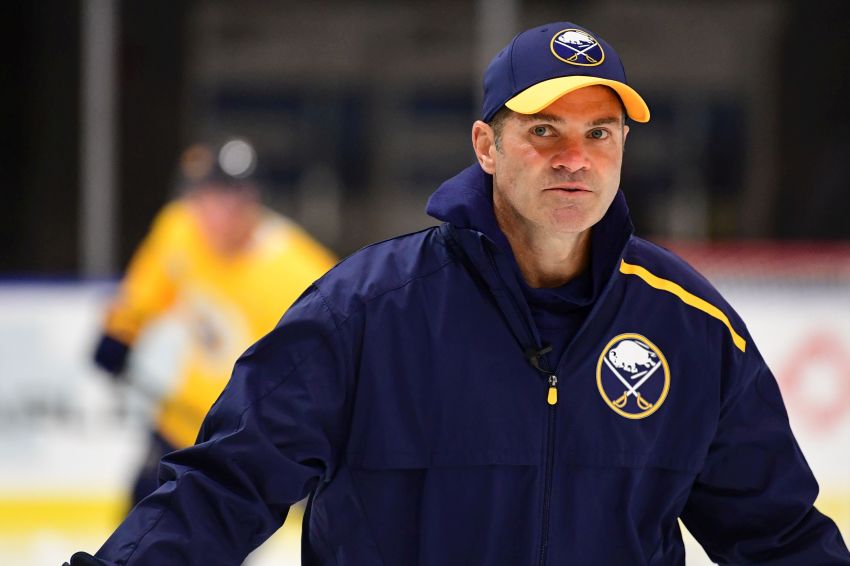 Not only have the Amerks enjoyed two successful seasons under the affable Taylor, players seem to love playing for him.

Not surprisingly, Taylor’s name came up during the Sabres’ search for Phil Housley’s replacement. Taylor, of course, has close ties to general manager Jason Botterill, his friend and former teammate.

Taylor, 47, said Botterill and assistant GMs Steve Greeley and Randy Sexton talked to him throughout the search.

Ultimately, the Sabres tabbed Ralph Krueger, 59, as their new coach.

That’s fine with Taylor, who said he’s happy in Rochester, a place he knows he can evolve as a coach.

“I felt more comfortable staying where I was in Rochester all the time and they felt that was the best situation for me as well,” Taylor said Wednesday following the first session of development camp inside Harborcenter. “Ralph is a candidate way above me. …

“I’ve got a lot to learn. I’m young, only two years experience, and I know that. I’m not trying to jump anywhere. And again, I love coaching the Rochester Americans.”

He added: “I know I’ve got to grow as a coach. I’m learning every day. Just by being here, I’m growing. It’s development camp for me as well.”

Taylor plans to soak up as much as he can from Krueger, who made his name in Europe before coaching the Edmonton Oilers, and the staff he recently assembled.

“I’m going to listen a lot, understand,” Taylor said. “He’s got a great staff with Steve Smith, Donny Granato and Mike Bales. That’s knowledge, and we need that in Rochester as well.

“Our coaches are listening to them and they’re great to us. They want to hear our stuff, too. We’re collaborating, which is great and that’s just the respect of him and his staff.”

Defenseman Lawrence Pilut, who played 33 games with the Sabres last season, won’t be on the ice this week after undergoing surgery on his left shoulder in May.

“It was something that had to be done,” said Pilut, who has a recovery time of about five or six months.

“I didn’t think too much about it,” Pilut said of returning to the game. “Of course, there was a little pain, but I just wanted to get out there.”

Pilut said his rehab has been progressing. He hasn’t skated yet, although he could next month.