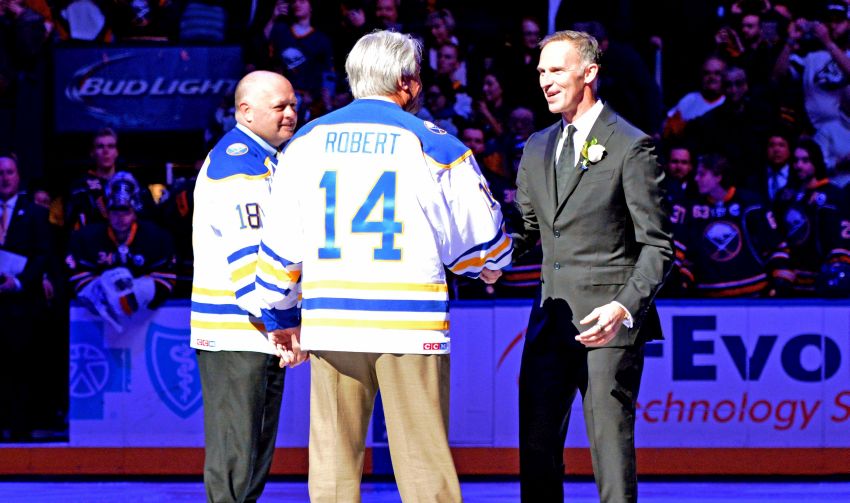 Dominik Hasek (right) is greeted by Rene Robert (14) and Danny Gare (18) prior to having his number retired Tuesday. ©2015, Dan Hickling, Olean Times Herald

BUFFALO – Goalie Dominik Hasek had never picked his own number before the Sabres acquired him in 1992.

So shortly after he arrived, Hasek was shocked when equipment manager Rip Simonick approached him at a late-summer workout at Sabreland in Wheatfield.

“I still remember, it was my first year in Buffalo,” Hasek, whose No. 39 was retired on Tuesday, said prior to the Sabres’ 3-1 loss to the Detroit Red Wings. “We were practicing before the training camp in Sabreland, and Rip Simonick came to me.”

If Simonick had given Hasek another number, he probably would have worn it. But Hasek chose No. 39, an iconic number that will hang in the First Niagara Center rafters forever.

The team honored Hasek, the seventh Sabres great to have his number retired, by having players wear special patches and issuing a commemorative game puck. They also painted No. 39 on the ice behind the nets.

The crowd roared for Hasek, who said the fans’ support meant more to him than any trophy he won.

Hasek won two Stanley Cups after the Sabres traded him to Detroit in 2001, but the Hall of Famer called his years in Buffalo the best time of his career.

He won the Vezina Trophy a stunning six times with the Sabres and the Hart Trophy twice, becoming the first goalie since Jacques Plante in 1961-62 to earn the MVP award. Both trophies were on the ice during the ceremony.

“What can I say?” said a grateful Hasek. “What a great nine years in Buffalo.”

“Brett Hull, I spent a year with him in Detroit, and in the whole season, we didn’t say one thing about that goal,” Hasek said. “We were good friends, we were talking about different things. But we sort of stayed away from that situation.”

Hull also told Hasek the Sabres would have won the Cup if they reached Game 7.

With winger Chris Stewart ill, the Sabres recalled Matt Ellis from Rochester for the first time this season. Ironically, the 33-year-old is the only current Sabre who played with Hasek.

“What Dom did in this city and this organization, it’s incredible, and he still continues to give back today,” Ellis said. “And to be a part of it and to see an ex-teammate and a person I watched growing up have his number go up to the rafters, it’s an extremely special night. I’m excited to be a part of it.”

Sabres coach Ted Nolan said he spoke with the 19-year-old Zadorov, who has been struggling for weeks.

“He was very receptive,” Nolan said. “We talked about where he is in his career and the things we have to do in order to make him the player he should be. It’s not trying to hope. I think hope is a good thing once in a while, but you don’t hope for a career to turn up, you got to work at it.”