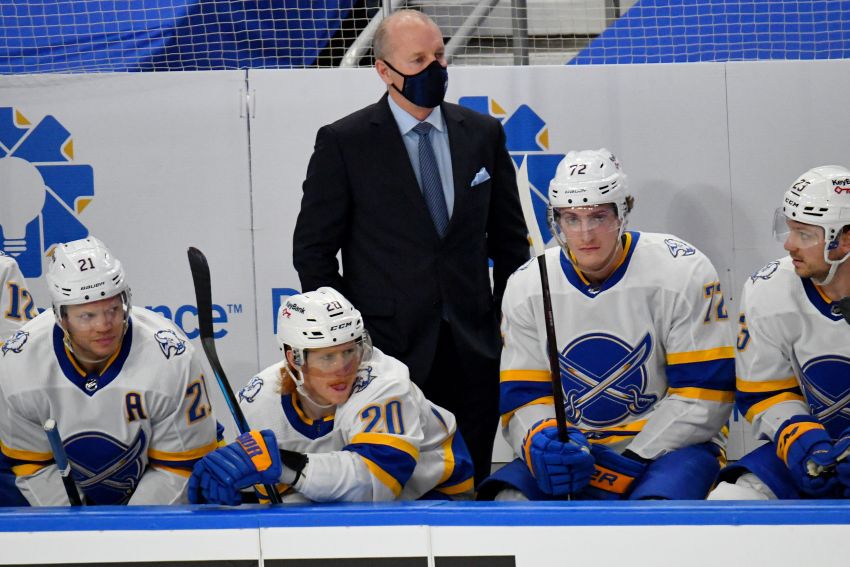 Everything was set up nicely Tuesday for the Buffalo Sabres to end their marathon losing steak.

In the New Jersey Devils, the hapless Sabres faced another reeling team they have earned three of their six wins against this season.

The Devils, who also endured a long COVID-19 pause last month, had 11 lost straight games at Prudential Center. Overall, they had dropped four straight contests and 12 of their last 14.

But the Sabres, who started strongly and grabbed a 2-1 lead in the second period, wilted down the stretch and fell 3-2.

They’ve lost 12 straight games and 16 of 18 since their COVID-19 pause ended, a stunning streak of futility. Remember, the Sabres began their pause with a 4-4-2 record.

The Sabres have quickly morphed from a team on the upswing into the NHL’s laughingstock.

General manager Kevyn Adams hasn’t fired or traded anyone or done anything notable as the Sabres keep unraveling. But something has to give, right?

On virtually any other team, the coach would’ve been gone by now.

“All I can say is I continue to enjoy doing this job, also in a difficult time,” Krueger said. “It’s easy to stand here when things are going well. It’s not that easy to stand here right now in this adversity. But I know we are learning and growing as an organization and we will take strength out of this in the future.”

At this point, in the midst of perhaps the sorriest stretch in franchise history, the players expect something will happen.

“Guys expect something just to get out of this in any way possible,” Sabres defenseman Brandon Montour said.

The pause, of course, certainly helped stymie the Sabres. So have injuries. Right now, they have five regulars out, including captain Jack Eichel, their most dynamic player, and No. 1 goalie Linus Ullmark, their backbone.

But Krueger said he hasn’t asked himself any what-ifs.

“Anything I mention right now is going to be perceived as an excuse and misunderstood so it’s the dangerous (territory) you go to,” he said. “I think everybody knows what the facts are. Everybody knows there was adversity along the way and everybody knows that we are still dealing with that. But it’s not that that anybody’s interested in. Everybody’s measuring it all on results and in four weeks – we have an opportunity out of these four weeks to take a lot of lessons and a lot of learning and a lot of growth.

“But growth is not useful in the moment and nobody puts value into it. But there is a lot of good things going on behind the scenes here in the conversations with the players.”

Fresh off Monday’s awful 6-0 home loss to the Washington Capitals, the Sabres jumped on the Devils early, outshooting them 12-5 in the first period.

“We had tons of good chances but just couldn’t find away again to put more on the board,” Sabres winger Tobias Rieder said.

The Sabres trailed 1-0 until Rieder scored 6:13 into the second period. Winger Jeff Skinner scored his second goal this season at 7:10, giving the Sabres a short-lived lead.

After going 177:07 without scoring a goal, the Sabres scored twice in 57 seconds.

“I just thought the guys really brought a lot of energy and spirit into the room before the game, onto the bench, and everybody was pushing each other,” Krueger said of the Sabres’ start. “They wanted this. They wanted it bad. I feel bad for the guys because I thought they really gave a valiant effort today and they showed a lot of courage on the back-to-back against a fresh New Jersey.

“Not getting it done in a game that we actually had the upper hand is really disappointing at this moment.”

Sami Vatanen scored at 10:39 before Miles Wood’s power-play goal 4:52 into the third period broke the tie.

Sabres winger Taylor Hall left the game in the opening minutes after taking a slap shot from teammate Colin Miller in the mouth or jaw area. Hall, who skated off the ice bleeding, returned for the second period.

The Sabres have a day off today before Thursday’s home game against the Boston Bruins.