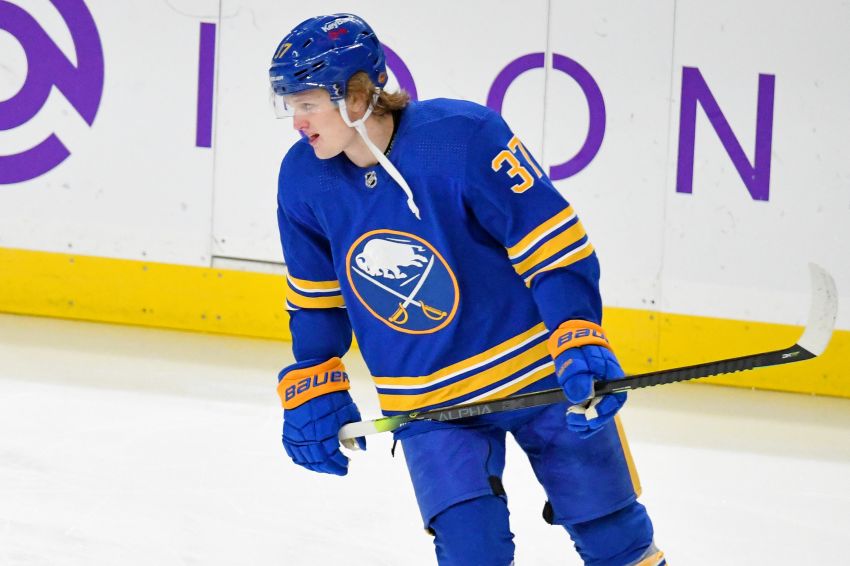 Casey Mittelstadt has moved up the depth chart this season. ©2021, Micheline Veluvolu

Yes, injuries and Staal’s departure have decimated the Sabres at center. The four who practiced Tuesday inside KeyBank Center – Mittelstadt, Cody Eakin, Curtis Lazar and Riley Sheahan – have combined to score 10 goals and 25 points this season.

Granato quickly promoted Mittelstadt, 22, that afternoon, moving him from third-line left wing to the No. 1 center spot between Taylor Hall and Sam Reinhart.

Before he was fired March 17, ex-Sabres coach Ralph Krueger said Mittelstadt would likely remain a winger, a position he only started playing regularly this season. But Granato moved him back to center, his natural position, in his fifth game as coach.

“He’s progressed to the point where I’m comfortable putting him at center regardless of the fact that we’ve lost the guys that we have due to injury or being traded,” Granato, whose Sabres have lost 18 straight games, said on a Zoom call Tuesday. “He was starting to earn that position anyway.”

Mittelstadt pivoted the top line in Monday’s 4-3 overtime loss to the Flyers, this time between Hall and Tage Thompson. Despite being on the ice for the late tying goal, the trio enjoyed a solid night, creating defenseman Brandon Montour’s goal.

The line also generated a Corsi For – the percentage of shot attempts by the team while a line is on the ice five-on-five – of 58.6%, according to NaturalStatTrick.com.

“It’s no secret it’s a big opportunity for me,” said Mittelstadt, the eighth overall pick in 2017. “I feel like I’ve been playing well and making plays.”

“It was nice to play center, I felt comfortable,” Mittelstadt said.

The Sabres, of course, envisioned Mittelstadt would ascend into a prominent role someday. But his development has sputtered at times over his three-year career.

By December 2019, the Sabres demoted a struggling Mittelstadt to the Rochester Americans for the first time.

After finishing the season in the AHL, he began this year on the taxi squad, looking impressive in occasional spot duty before earning a regular gig earlier this month.

Mittelstadt embraced his move to left wing and later right wing, showcasing a sturdier, more consistent style. He was a defensive liability earlier in his career, and while he’s still green, he has earned enough trust to be utilized in difficult situations.

Granato said Mittelstadt used his stint on the taxi squad “as fuel.”

“When he came in the lineup, he showed that he was well-prepared,” he said. “He wasn’t hanging his head. Lots of times, guys that aren’t in the lineup through frustration, they don’t practice as hard and their conditioning drops unbeknownst to them when they get their opportunity.

“That was not the case with Casey. He stayed competitive, he stayed engaged, he stayed focused on improving and developing and he’s progressed.”

Mittelstadt said this season has been “a bit of a feeling-out process.” In addition to sitting out 12 of the Sabres’ first 14 games, he tested positive for COVID-19.

“But now I think my lungs and my legs are really getting under me, I’m starting to play faster and getting more confident every game,” said Mittelstadt, who has compiled one goal, five points and a minus-14 rating in 19 games this season.

Lazar said: “He wants the puck on his stick. He wants to make plays. And you’re seeing that confidence kind of grow each and every game.”

Much of that confidence can be traced to Mittelstadt’s ability to quickly process what he sees and hears.

“I feel like I’ve picked it up a lot faster this year than I have any other year,” he said. “Obviously, the numbers aren’t necessarily there but chances and creating chances, I feel like it’s been exponentially better than it has been in the past for me. It’s more a state of not getting frustrated and just sticking with it because they always come in bunches; you get one and then all of a sudden you get three and you start rolling.

“I think for me, (the game has) slowed down quite a bit, I’ve just gotten stronger, I’ve been able to hold onto pucks more and pick my head up and make a great play.”