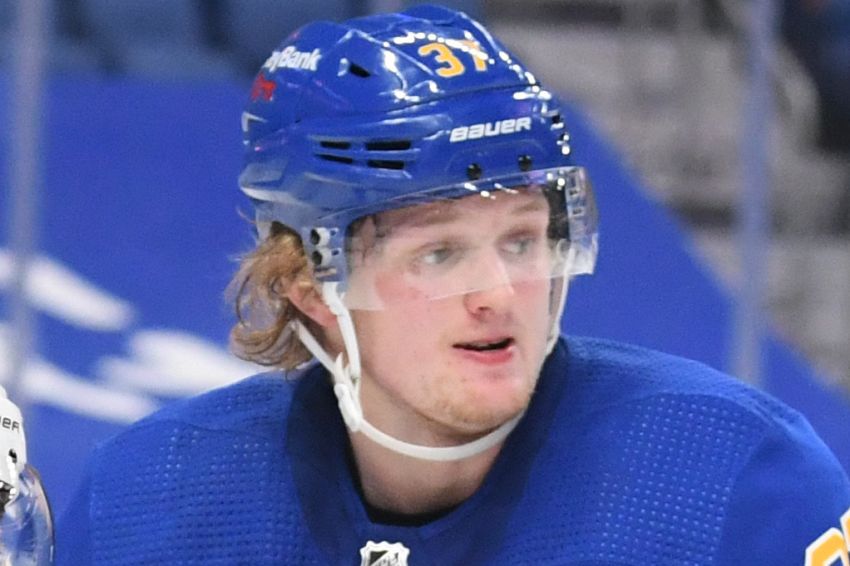 BUFFALO – In his first 12 games as interim coach, Don Granato’s most telling accomplishment has been his ability to unlock potential from several of the Sabres’ young players who struggled to stay in the lineup earlier this season.

Consider that in Friday’s 4-3 loss to the Washington Capitals, center Casey Mittelstadt, defenseman Henri Jokiharju and winger Tage Thompson scored for the Sabres inside KeyBank Center.

All three players are 23 or under and spent significant time as a healthy scratch or on the taxi squad earlier this season.

“Extremely happy,” Granato said on a Zoom call of the young players’ development. “That’s a priority. It will remain a priority simply because their ceiling is so high and we need to become a better team. That was obvious when I stepped in and the other obvious was the guys with the highest ceiling, we needed to move toward that.

“I’m very, very pleased with not only that progress but the effort and focus they’ve had in regard. They’ve been incredible, all of them.”

Mittelstadt, 22, might finally be coming into his own under Granato. After spending the most of the season on the taxi squad or as a third- or fourth-line winger when he played, he has quickly morphed into the Sabres’ No. 1 center and top scoring threat.

“He’s made that step and now his skill is seen,” he said.

Mittelstadt’s goal 10:08 into the second period was his fourth goal and sixth point in the last six games. He mustered zero points in his previous six outings.

“I just had some time to grow up,” said Mittelstadt, the eighth overall pick in 2017. “I think that’s (it) more than anything. I don’t know, it’s so much on the ice, off the ice getting myself ready to play, taking care of my body away from the rink. I think you get in what you put out.”

Thompson, 23, began the season on the top line beside captain Jack Eichel before quickly moving out of the lineup and becoming a healthy scratch. But Thompson’s confidence has grown under Granato.

He scored for the second straight night and for the third time in five games 18:40 into the third period, which narrowed it to 4-3.

“With Tage, he’s at a point now where he can be pushed, pushed hard,” Granato said. “And we’ve pushed him and he’s responding. We pushed him with clips today and said, ‘You can be better and you need to be better in these areas.’ He was tonight. He shot the puck more, he had a much better drive to the net, net focus.”

Thompson has spent the last week playing beside Mittelstadt.

“We’ve gotten in some sort of rhythm getting to play with each other and obviously he’s helped me out a lot,” Mittelstadt said.

The Sabres made one lineup change among their 18 skaters against the Capitals, inserting winger Arttu Ruotsalainen, 23, for his NHL debut. They recalled the Finn from the taxi squad before the game and sent winger Steven Fogarty, who had played five straight contests, back to the practice group.

“It took a couple shifts and I was feeling a little bit more comfortable,” Ruotsalainen said.

He added: “It was an OK start for NHL games. I think it was a good lesson for me (to see) what it takes to play against one of the top teams in the league.”

Ruotsalainen’s teammates gave him a solo lap on the ice before warm-ups, a tradition for players making their debut.

They scratched winger Taylor Hall, who will almost certainly be traded before Monday’s deadline, for the third straight game. They, of course, want to protect an asset.