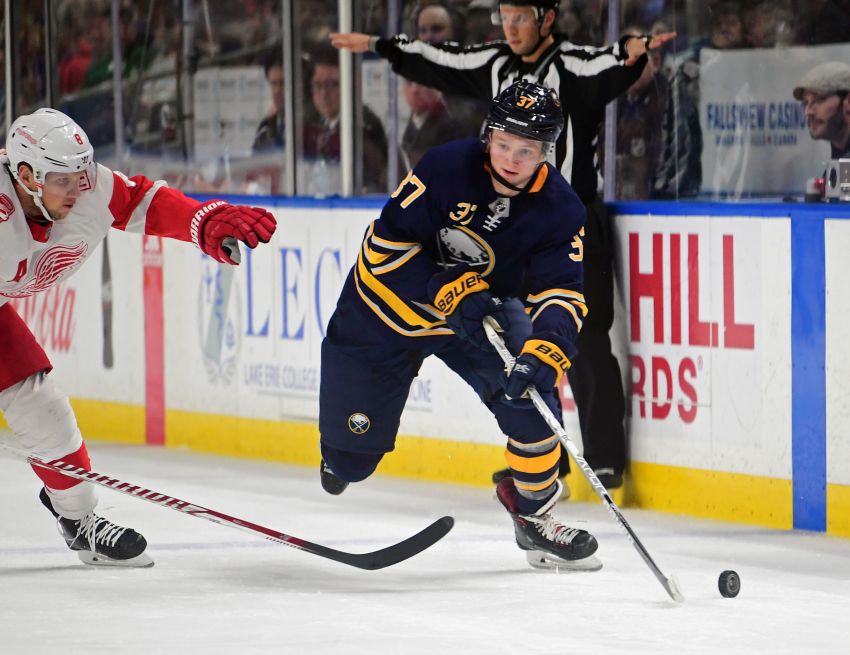 No, 4:51 in the third period of Thursday’s 6-3 loss to the hapless Detroit Red Wings, Mittelstadt, 19, simply won a draw cleanly back to linemate Evan Rodrigues, who beat goalie Jimmy Howard to get the Sabres within one goal.

One game, one assist for the eighth overall pick in 2017.

“It’s something that I dreamed about,” Mittelstadt said. “It’s pretty exciting. I think it’s a bit of a burden off, you kind of want to get rid of the first point and go from there. So for me it was definitely exciting. I’m sure my parents were excited, so it’s definitely cool.”

The crowd inside KeyBank Center, which cheered Mittelstadt throughout his NHL debut, roared when the center’s assist was announced.

Years from now, Mittelstadt will remember everything – the anticipation, the first time his skates touched the ice – about his first outing.

The rest of the Sabres, however, want to forget about Thursday’s ugly loss, their seventh in nine games (2-6-1).

Against the reeling Red Wings, the Sabres opened up an early 2-0 lead, putting a team that had won just two of its previous 15 games on the ropes. Center Jack Eichel scored at 3:16. Center Ryan O’Reilly followed on the power play at 7:11.

“It just seemed like we never really had our game going again after that,” said Eichel, whose 25th goal set a new career high. “There were spurts of it, there were some good things. But consistently, shift in and shift out, I thought it wasn’t really where we wanted it to be. Every play matters. Every pass, every shot, everything. It all goes into winning hockey.

“I thought maybe there were times when we took shifts off or took plays off and let our foot off the gas. Whether it’s mental or errors with the puck, it’s a process. We’re not going to win a hockey game with the errors that we made there.”

Coach Phil Housley said the Sabres “just made too many critical mistakes at the wrong time.”

“It’s just execution,” he said. “We had two breakaways short-handed and didn’t finish. In those tough times or critical times, we just had to stay the course. We’re trying to do too much or we force things that aren’t there, it gets turned around and it winds up in our net.”

Incredibly, with one game left here this season, the Sabres won just 11 times at home.

Meanwhile, Mittelstadt, who left the University of Minnesota earlier this week, skated 12 minutes, 53 seconds Thursday, including 80 seconds on the power play.

His teammates had some early fun when they sent him out for a solo skate to start the pregame warm-up.

“Honestly, I’ve seen so many people do it, when they told me I was going first I was kind of expecting it,” Mittelstadt said. “I was laughing, it was funny.”

The American registered one shot on goal, was on for two goals against and was also whistled for a faceoff violation in his first game since March 3.

“I was really satisfied,” Housley said of Mittelstadt’s performance. “To be not playing for a month and come into a tough situation, I thought he handled himself really well. A lot of the mistakes he made, you could just see he was a little rusty right now but he certainly did a lot of good things out there.”

O’Reilly said: “It’s a tough thing to do, taking that time off and jumping right into it. Obviously, coming to the worst team in the league, too, a team that’s been struggling all year and not making a lot happen, he definitely stepped up a bit.”

Sabres goalie Robin Lehner left with an undisclosed injury following the second period and was replaced by Chad Johnson. Housley had no update on Lehner, who was banged up last week and missed some time.

Update: The Sabres recalled goalie Adam Wilcox this morning. Lehner, according to the team’s injury report, is day-to-day with a lower-body injury. Goalie Linus Ullmark, meanwhile, has a concussion.