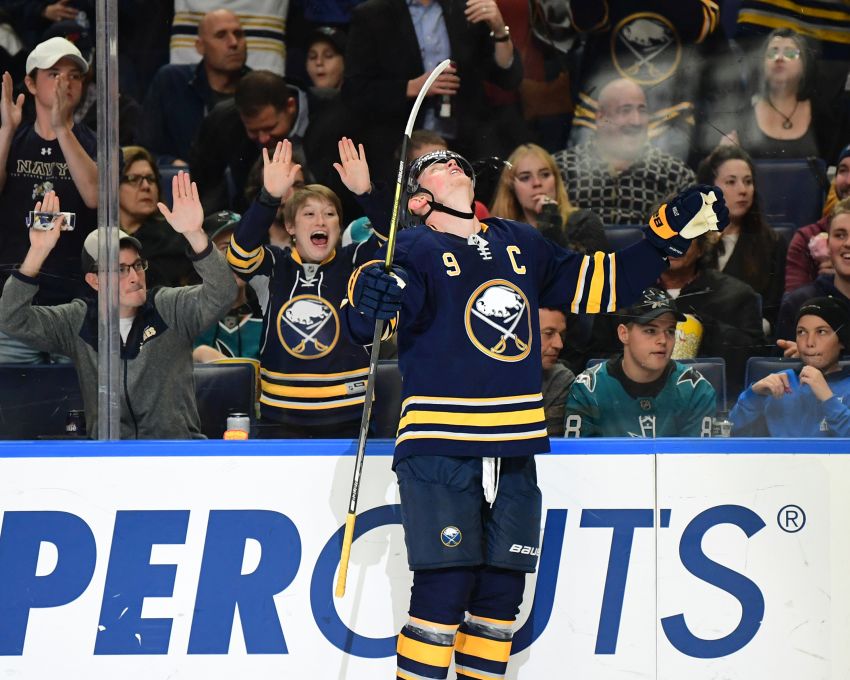 It wouldn’t be the last time Eichel did it early in Tuesday’s 4-3 overtime victory, a wild contest in which the Sabres roared back thanks to their young star’s dynamic performance.

“(I was) a little frustrated with myself more than anything,” Eichel said after scoring the overtime winner, the final of his six shots in a brilliant two-goal, four-point outing that improved the Sabres to 8-1-1. “I just felt like I had a couple opportunities to shoot the puck.”

Eichel’s penchant for dishing to his teammates is well known. Five years into his career, the center hasn’t developed a shoot-first mentality.

“I obviously have passed up a lot of shots in my career trying to make plays,” Eichel said. “(I) just got to find that shooter’s mentality a little bit more.”

So when Eichel kept deferring to his teammates Tuesday, many in the crowd of 15,876 inside KeyBank Center let the two-time NHL All-Star know what he should be doing.

“The fans were letting me know that I had a few opportunities to shoot the puck,” said Eichel, whose Sabres trailed 2-0 after 20 minutes.

Coach Ralph Krueger, who said the Sabres “had some smiles” when Eichel utilized his shot Saturday, has also encouraged him to use it more often.

Not surprisingly, when Eichel finally unleashed his wicked wrist shot from the left circle during a second- period power play, Jones couldn’t handle it.

The goal ignited the Sabres.

After the Sharks tied it, Eichel pounced on Ristolainen’s rebound 3:13 into an overtime the Sabres held the puck throughout.

“He’s a dominant player,” Skinner said. “He can take over games. That’s why he is who he is. He made some big plays in some big moments.”

Eichel’s effort might’ve been the best of his 296-game NHL career. More like it will help elevate him to superstar status.

His exploits have helped the Sabres, a team that has missed the playoffs eight straight seasons, enjoy the second-best start in franchise history. The Sabres started 10-0-0 in 2006-07.

While it’s still very early, Eichel has scored six goals and 14 points in 10 games, putting on pace for a whopping 49 goals and 115 points over a full campaign.

Of course, the American must start producing offense on the road, where the home team can put its best checkers on him. He has mustered just one point, a goal, in five away games.

“We use the home ice to our advantage,” Eichel said. “I definitely enjoy playing here. It’s comfortable.”

These days, the Sabres look comfortable even when they’re trailing. Throughout the first three weeks, they’ve dealt with adversity well, rarely flinching.

“We have a lot of trust in the system, first off,” Reinhart said. “It’s not too hard on a night like tonight when I felt there was a lot we were doing well in the first period.

“You kind of got to take a second in the intermission to realize the talent they have over there. They did make us pay, but I did like the start of the second.”