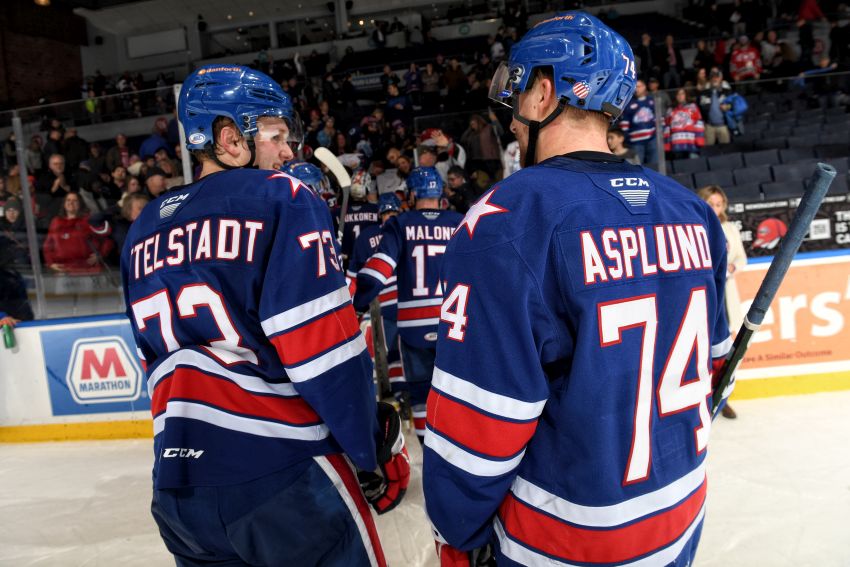 Casey Mittelstadt and Rasmus Asplund leave the ice after a game in 2019-20. ©2020, Micheline Veluvolu, Rochester Americans

In what would be the final days of the American Hockey League season, coach Chris Taylor drew confidence from the maturity his Rochester Americans began showcasing.

To Taylor, the Amerks’ response to some rare adversity – they endured losing streaks of seven and four games in the winter – illustrated his players had become equipped to handle the highs and lows of a long, grinding season.

“They weren’t getting as frustrated as you think that they might,” Taylor told the Times Herald on Monday after the COVID-19 pandemic forced the AHL to cancel the rest of the season, including the Calder Cup playoffs. “They were trying to just get better and better and sticking together.

“That’s what told me right there, OK, we’re understanding what’s going on, and I think we didn’t have those situations in our first two years (together). We never went through that, we kind of just went through that in the playoffs.”

In Taylor’s first two years as coach, the Amerks imploded during the playoffs, getting swept twice. That’s why a sense of unfinished business accompanied the 2019-20 season.

“There was a lot of talk about it at the start of the year, and we just kind of erased that, but it was still in the back of your minds, obviously,” Taylor said. “Everybody … was in the right frame of mind of what we were trying to do and create, and I think we were trending in the right direction.”

Then the AHL suspended its season shortly after the NHL did March 12 as the novel coronavirus began spreading throughout North America.

“We were in a good situation, and it kind of just closed down right away,” said Taylor, whose Amerks finished second in the North Division, compiling a 33-20-5-4 record (75 points).

So the opportunity for a long playoff run – the Amerks haven’t won a series since 2005 – has disappeared. So has a chance for Buffalo Sabres prospects like center Casey Mittelstadt and defenseman Jacob Bryson to play postseason games that are critical to a youngster’s development.

“Everybody’s got those players (like Mittelstadt) in their organizations,” Taylor said. “They all want to see him play, I wanted to see how he’d grow even more and more. That’s definitely a tough situation for those guys.”

It had been rumored the AHL would cancel the rest of the season. With many states and provinces still locked down and large gatherings banned, the league saw no other option.

Taylor and Amerks general manager Randy Sexton both said it was the correct decision.

“You look at all the scenarios, and you just knew that it wasn’t possible,” Taylor said.

The board of governors voted to end it Friday, meaning the Calder Cup won’t be awarded for the first time since the AHL formed in 1936-37.

“After a lengthy review process, the American Hockey League has determined that the resumption and completion of the 2019-20 season is not feasible in light of current conditions,” AHL president Dave Andrews said in a statement released Monday. “The League’s operational focus has turned toward actively preparing for the 2020-21 season. We are very grateful to the National Hockey League and its teams for their support and leadership in navigating through the challenges faced over the past two months.

He added: “We all need to recognize that it may take a slightly different shape or form over the short-term.”

Sexton mentioned the AHL could be “reduced” next season – perhaps some teams won’t be able to operate – or begin its schedule later. He’s not worried about the long-term viability of the league, which relies heavily on ticket sales to generate its revenue.

Twenty-one AHL teams are owned by their parent NHL club, according to Sexton. Sabres owner Terry Pegula purchased the Amerks in 2011.

Sexton said the Sabres would assemble the Amerks this summer like they normally do. The 2020-21 edition, however, could feature fewer veterans and more draft picks. The Amerks have already lost star defenseman Zach Redmond, who signed a contract in Germany.

“We have been moving toward having a younger roster and injecting some of our younger players into the lineup,” he said. “That’s been part of the plan since we came to Buffalo.”

Some prospects from general manager Jason Botterill’s first two drafts are eligible or ready to play in the AHL.

Sexton mentioned the Sabres could sign defenseman Oskari Laaksonen, a third-round pick in 2017. Laaksonen has been playing in his native Finland.