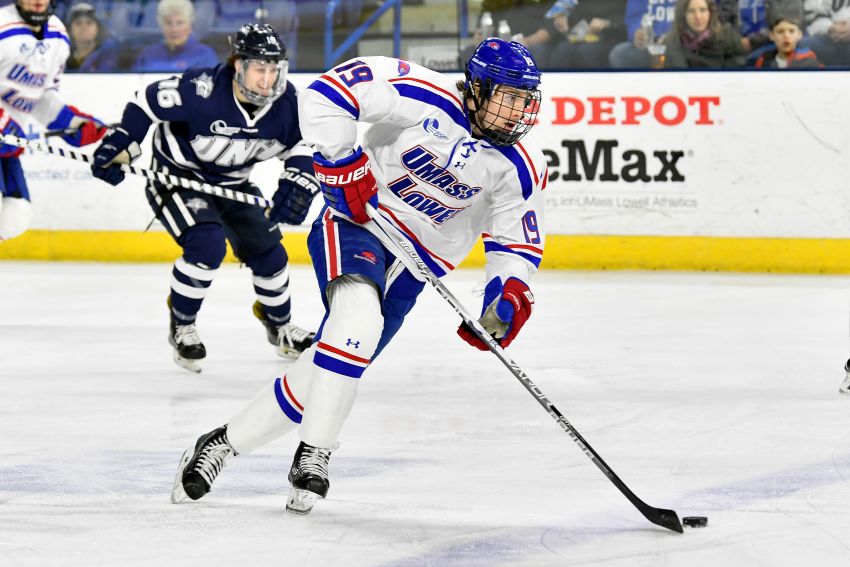 BUFFALO – As a speedy forward fresh off a 23-goal, 51-point junior season, Sabres newcomer C.J. Smith had plenty of suitors earlier this week after he decided to leave UMass Lowell and turn pro.

“It just kind of fits the person I am,” Smith said Thursday following his first NHL practice. “I grew up in Des Moines, Iowa, a blue-collar city, played in Lowell, (Mass.) and played in Austin, Minnesota, all kind of blue-collar communities and they all play blue-collar hockey. I think that’s kind of what the Buffalo Sabres are about. I think I kind of fit their identity.”

The 5-foot-11, 185-pound Smith signed Thursday morning and was on the KeyBank Center ice with his new teammates by 11:30 a.m., capping a whirlwind few days.

Notre Dame eliminated UMass Lowell from the NCAA Tournament on Sunday. Smith said he sat down with his coach and discussed his future Monday.

Smith said he left school because he wanted to gain “more experience playing against bigger guys.”

“I think I can hold my own against (these) guys,” he said.

Smith flew out and arrived in Buffalo, a city he had never visited, about 5 p.m. Wednesday.

He added: “There’s a … young core in here that’s going to grow this program.”

Smith’s path to the NHL has been long. He went undrafted and spent three years in junior before joining UMass Lowell in 2014-15.

He improved each NCAA season, upping his goal and point totals. This year, he led the River Hawks in goals and ranked second in points, setting new career highs in 41 games. He compiled 56 goals and 125 points in 120 appearances over three seasons.

“I got speed, skill,” Smith said, “but I just also play a hard game, play a heavy game coming from Lowell. A heavy, puck-possession game is my identity and who I am.”

“I had some success (in my) freshman and sophomore year,” he said. “I put some pucks in the net. But I think being able to be a 200-foot player and playing away from the puck really grew my game and actually helped me have more offense this year.”

Of course, that scoring prowess might not translate to the NHL. But his other skills should be visible whenever Smith debuts for the Sabres, who don’t play again until Sunday.

“It’s a fresh, young-looking face in that helmet,” Sabres coach Dan Bylsma said. “C.J.’s coming with speed and skill, with some jump in his game and has demonstrated that with UMass Lowell, especially this year. But (125) points in 120 college games is pretty impressive.”

“Just want to see him get in the mix and see what he could do when he gets in a game,” he said.

Smith has some familiarity with the Sabres. UMass Lowell is in Hockey East, so he competed against Eichel and center Evan Rodrigues when they played for Boston University two years ago.

Smith knows Sabres prospect Cal Petersen, Notre Dame’s No. 1 goalie and captain, from Iowa. They played summer hockey together and “are pretty good buddies,” he said.

Petersen, one of the NCAA’s top goalies, could leave school soon. While Smith already left, he isn’t done with college yet. Shortly after talking to the media, the finance major had to take a test online.

“We introduced him to the team,” Bylsma said. “We told him that afterwards, in addition to his 2 o’clock test, he’d have to remember all the guys’ names. His head’s kind of spinning. He’s … got a lot going on. But that’s an exciting thing for him.”

One thought on “C.J. Smith sees fit with Sabres, Buffalo”