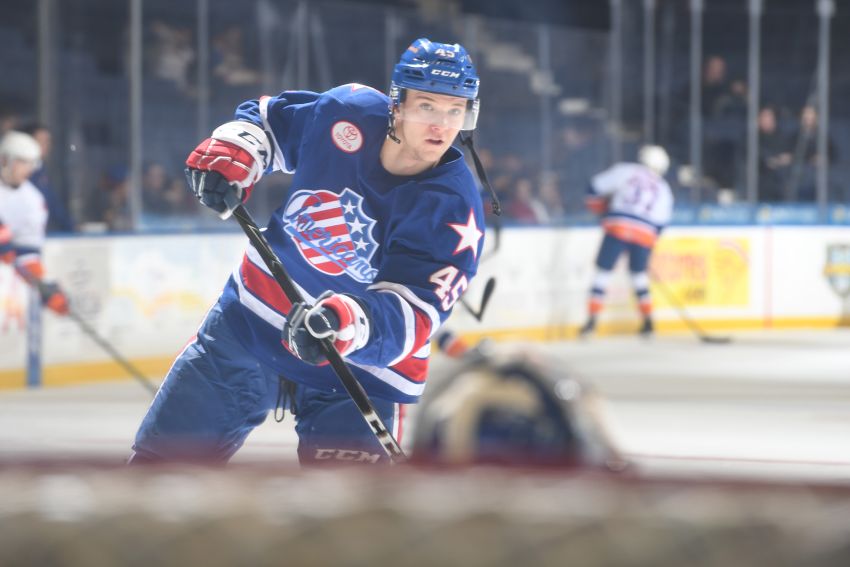 BUFFALO – Early on, as injuries decimated the blue line and rookie Brendan Guhle stayed in Rochester, the Sabres’ plan for their top defense prospect became obvious.

“We were going through a tough stretch there … (and) we had some capable defensemen back there, we were giving them an opportunity to see what they can bring to our team,” Sabres coach Phil Housley said this afternoon inside KeyBank Center. “They were winning hockey games (in Rochester), so it was a great chance for him to get some games, develop, bring his game to another level.”

The Sabres, of course, wanted Guhle, who was recalled this morning, to pay some dues and quietly develop with the upstart Americans.

The slick Guhle, 20, has acclimated to pro hockey quickly, compiling seven goals and 20 points in 35 AHL games as a rookie with the Amerks.

“They said I earned the recall,” Guhle said.

Guhle’s strengths can certainly help the reeling Sabres, who have an NHL-low 10 wins and have lost four straight games.

“Just give him an opportunity, he’s playing some terrific hockey down in Rochester,” Housley said. “It’s just a good time before we hit the break. We can maybe utilize him in a game.”

The Sabres host Winnipeg on Tuesday and Columbus on Thursday before beginning a four-day bye week. Guhle, who practiced beside Jake McCabe today, will almost certainly play Tuesday.

“It’s just a good opportunity to see what he can bring to practice,” he said. “I really like his mobility, obviously. But I like the stick detail that he has defensively and what he does from our goalie, working out, you look at him, he’s joining the rush and making things happen back there.”

While receiving a promotion is special, Guhle mentioned twice he was thinking about his teammates in Rochester. The 22-8-3-3 Amerks have quickly grown close in three months.

“We’ve got a great group of guys down there and they’re all awesome teammates,” Guhle said. “I’m thinking about them today and hopefully they’re having a great practice. Coming to the rink every day is fun.”

In other news, the Sabres also recalled goalie Linus Ullmark, an AHL All-Star, to practice for Robin Lehner, who had a maintenance day today. Housley said Lehner is day-to-day.