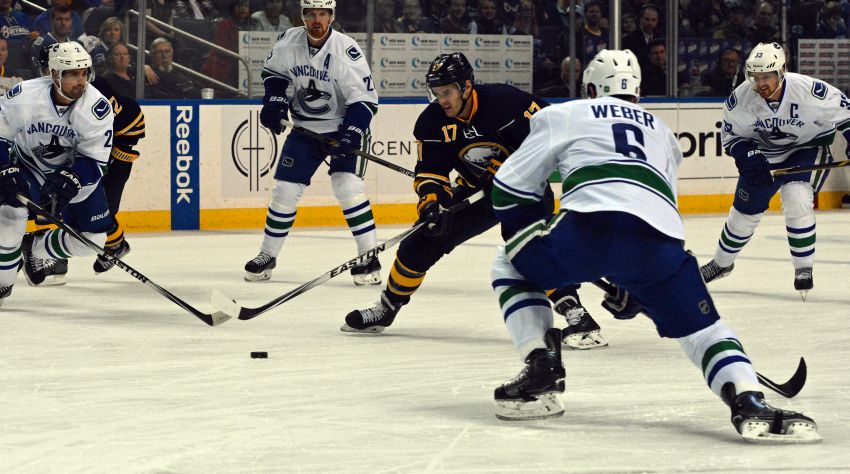 BUFFALO – Of course, the Sabres’ best stretch in two months could end soon. The trade deadline is three days away. The rebuilding club will almost certainly deal some of its top assets.

If Thursday’s 6-3 win against the Vancouver Canucks was the final game for a few players, they gave the Sabres one heck of a goodbye before a capacity crowd of 19,070 fans inside the First Niagara Center.

Consider the exploits of these players with expiring contracts in the Sabres’ second straight win:

– Center Torrey Mitchell scored twice, including the winner with 7:17 left, his first goals in 29 games.

– Goalie Michal Neuvirth made 28 saves in his seventh consecutive start, including 15 in the third period.

Their value’s only increasing.

“It’s out of our control and part of the business,” Stewart said about the deadline. “Judgment day is coming, and I’m just as antsy as you.”

For now, coach Ted Nolan has the Sabres playing their best hockey since a 10-3 stretch before Christmas. They hadn’t won two straight contests since a four-game streak Dec. 9-15. They’re 3-1-2 in their last five games.

“We know it’s in here, that’s the frustrating thing,” said Sabres captain Brian Gionta, who had an empty-net goal and three points. “When we play with confidence, play with that in-your-face tight gap, we don’t give them much. We’re a much better team. When you can do it consistently, you look at the results we get.”

Fresh off of Tuesday’s 4-2 in Columbus, the Sabres played one of their best start-to-finish games all season, scoring four third-period goals, including three unanswered to close.

“Against two pretty good teams,” Mitchell said about the Sabres’ streak. “It’s fun to win, even though we’re obviously not going to be in the playoffs at the end of the season, to have that atmosphere around the rink.”

The Sabres held Vancouver to three first-period shots. They took zero penalties for the first time since March 20, 2011.

“They couldn’t really establish themselves in our end,” Mitchell said. “Tip our hat off to our defenseman tonight.”

They answered the Canucks, who played without injured former Sabres star goalie Ryan Miller, throughout their 19th win this season.

The Sabres scored six goals for only the second time this season and have four or more goals in consecutive games for the first time since a three-game stretch Dec. 11-15.

“We came at them in waves,” Stewart said. “It was probably one of the few games this year that we’ve had four lines rolling top-to-bottom.”

Mitchell, who hadn’t scored since Nov. 22, opened the scoring 13:07 into the game, connecting on Matt Moulson’s pass in front. Mitchell backhanded a shot past Canucks goalie Eddie Lack at the bottom of the left crease for the winner.

“Our two leading scorers being out, other guys need to step up,” Mitchell said. “I felt like it was a group effort tonight and everyone picked up their slack a little bit.”

Nolan added: “Torrey Mitchell, for the last number of games he’s been playing tremendous for us. Sometimes he should get the credit for blocking shots and playing defense.”

Mitchell and Stewart, who has 11 goals, figure to be the Sabres’ biggest chips before the deadline.

“To me, he’s one of the top power forwards in the game,” Nolan said about Stewart. “When he’s on top of his game, he’s pretty effective. The last month or so, he’s playing great for us.”

Defenseman Andrej Meszaros, another upcoming free agent, scored the go-ahead goal early in the third period before Vancouver’s Daniel Sedin tied it. Meszaros, who struggled for months, has been playing better recently and could have some value.

The Sabres don’t play another home game until March 14. They begin a five-game road trip Saturday in Florida.