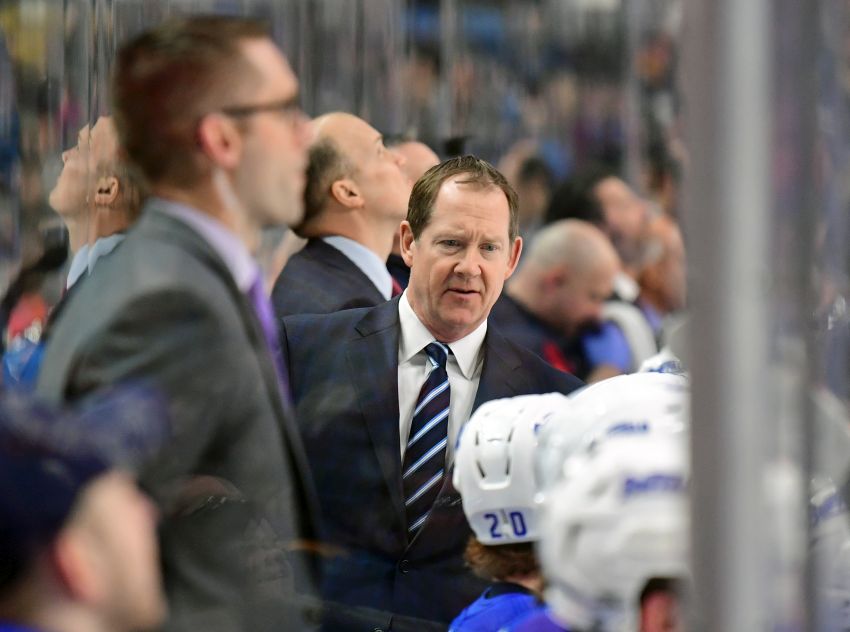 BUFFALO – Barry Trotz was working late Sunday, so the Washington Capitals coach sent a trainer to see if Phil Housley, a former assistant, was still in his office inside KeyBank Center.

Housley was there, so Trotz and his old friend caught up for a little while.

Trotz, a mentor to Housley, is the NHL’s dean of coaches, having continuously led a team since 1998-99, when he took over the expansion Nashville Predators.

“He’s a terrific individual, (I) congratulated him on his 1,500th game,” Housley said prior to Monday afternoon’s 3-2 loss to the Capitals. “I believe I may not see that. But it’s just a great feat on his part. He’s a gentleman and a very classy guy.”

Without Trotz’s belief, Housley, who has endured a rough first season in Buffalo, likely wouldn’t be coaching the Sabres today.

Prior to 2013-14, Trotz’s last season in Nashville, he wanted to hire a former defenseman to work with the team’s young blue liners. Housley, a dynamic player in his day, was months removed from leading Team USA to a gold medal at the 2013 World Junior Championship. He was also coaching high school hockey at home in Minnesota.

“I felt that would be a real good change and an upgrade helping our good young D,” Trotz said.

So Trotz hired Housley, who had never coached in the NHL. While the Predators fired Trotz following the season, new coach Peter Laviolette kept Housley, who developed into one of the league’s top assistants.

By last season, as the Predators roared to a berth in the Stanley Cup final, Housley became a top head coaching candidate. The Sabres hired him in June.

“Just the way he approached the game and his preparation, really, really solid in that direction,” Housley said. “You look at teams he had early on in his career, they were a bunch of hard workers, but he got them to play hard and a good system.”

Trotz is confident Housley, whose Sabres have 45 points, the NHL’s second-lowest total, will succeed.

“When you come into a new organization, a new sort of mindset in what you’re doing, it takes a while for it to get implemented and established,” Trotz said. “There’s a lot of factors, everything from injuries to your leadership core, all of that.

“I think he’s got a real good plan going forward for this long term for Sabres fans and the team. He’ll do a real good job.”

Chad Johnson replaced Lehner and the Sabres recalled Linus Ullmark from the Rochester Americans to back him up.

Ullmark, an AHL All-Star, is expected to be the Sabres’ starter next season. They sent him back to Rochester following the game.

Gorges had been scratched 10 of the previous 13 games.

The Sabres waived Deslauriers, 26, in training camp before assigning him to the AHL. They traded him to Montreal for defenseman Zach Redmond on Oct. 4.

Deslauriers played 14 games with the Laval Rocket, Montreal’s AHL affiliate, before the Canadiens summoned him.

In eight games since Feb. 1, Sabres center Johan Larsson has been assessed a 10-minute match penalty, a five-minute cross-checking infraction – that earned him a two-game suspension – and six minors.

Larsson, who took a needless first-period tripping penalty Monday after the Sabres won a draw, also has zero goals and two assists in that span.