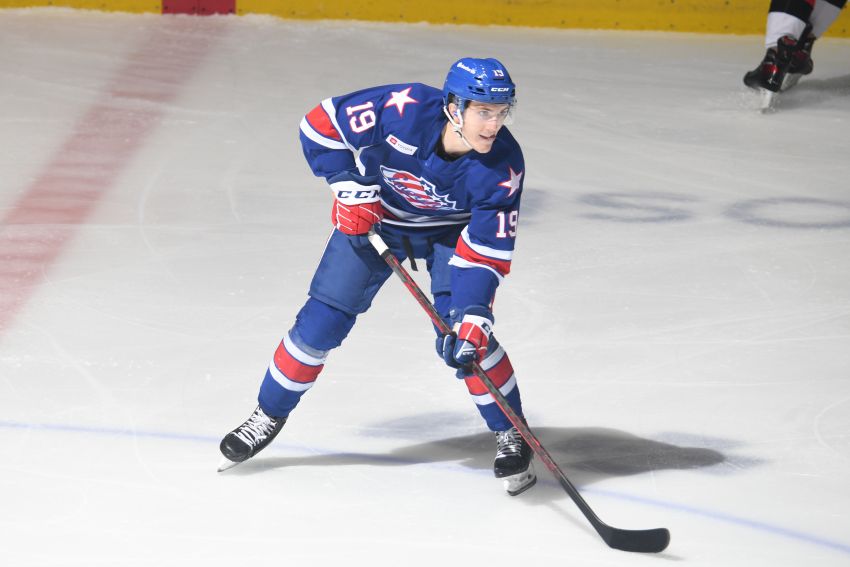 Peyton Krebs was a difference-maker for Rochester on Wednesday. ©2022, Micheline Veluvolu, Rochester Americans

ROCHESTER – When the Sabres assigned Peyton Krebs to the AHL following a successful 48-game stint in Buffalo, they probably hoped the center would be an offensive catalyst for the Americans in his first taste of playoff hockey.

Sure enough, after a slow start, Krebs helped the Amerks complete a furious three-goal, third-period comeback in Wednesday’s dramatic 4-3 win overtime win against the Belleville Senators before a raucous crowd of 6,044 fans at Blue Cross Arena.

The Amerks wouldn’t have won roared back from a 3-0 deficit and won their first Calder Cup Playoffs game since May 2, 2014 without Krebs’ dynamic playmaking skills. The rookie’s adroit passing created two late goals in just under three minutes, tying a contest that just minutes earlier looked out of reach.

“It took me a bit, for sure, to ease into it,” Krebs said. “But once I started feeling it, I could make plays.”

At 16:03, Krebs found defenseman Casey Fitzgerald down low for the tying goal. At 13:19, his pass to Fitzgerald in the left circle set up defenseman’s Jimmy Schuldt’s goal.

“When he has the puck, I’m just trying to get open because I know he’ll find me wherever,” said Fitzgerald, who rejoined the Amerks last week after a 36-game stint with the Sabres. “I think I went behind the net there, which is kind of a no-no for a d-man. I just knew because he had the puck, he’s going to make a hell of a play. And he did.”

Adjusting to the AHL of course, can be difficult after spending more than half a season in the NHL. Krebs, 21, noted the AHL is more run-and-gun and players often just hit you for the heck of it. Krebs was also playing center again after often skating as a winger in Buffalo.

“I thought he got better in the second, he started making a lot of plays,” Amerks coach Seth Appert said of Krebs. “And then I thought he was excellent in the third.”

He added: “Peyton is high intelligence, he’s got high compete and he’s got high character, and as long as he does those things, usually good things will follow.”

“For that line to step up there, to get that first one out of the way, I think the floodgates opened after that,” Krebs said.

Amerks winger Linus Weissbach had to be helped off the ice and did not return after Belleville’s Mark Kastelic hit him into the boards at center ice 2:53 into the game.

Appert said Weissbach, 24, was “not great.” The Swedish rookie has an upper-body injury, according to the Amerks.

“I would imagine he’s going to be out for at least a bit,” Appert said. “He was struggling pretty good.”

Weissbach did not have the puck when Kastelic hit him. Appert said the referee was correct in not calling a penalty on the play.

Notes: Defenseman Mattias Samuelsson, who was sent back to the Amerks with Krebs on Sunday, missed Wednesday’s game because of an ankle/foot injury. … Amerks defenseman Oskari Laaksonen, who compiled five goals and 34 points in 71 regular-season games, was a healthy scratch for the opener. Laaksonen, 22, spent time on Buffalo’s taxi squad earlier this season. … With Amerks goalie Ukko-Pekka Luukkonen out for the series after suffering a lower-body injury in Friday’s regular-season finale, Michael Houser backed up starter Aaron Dell, who made 24 saves. … Game 2 is Friday in Belleville.