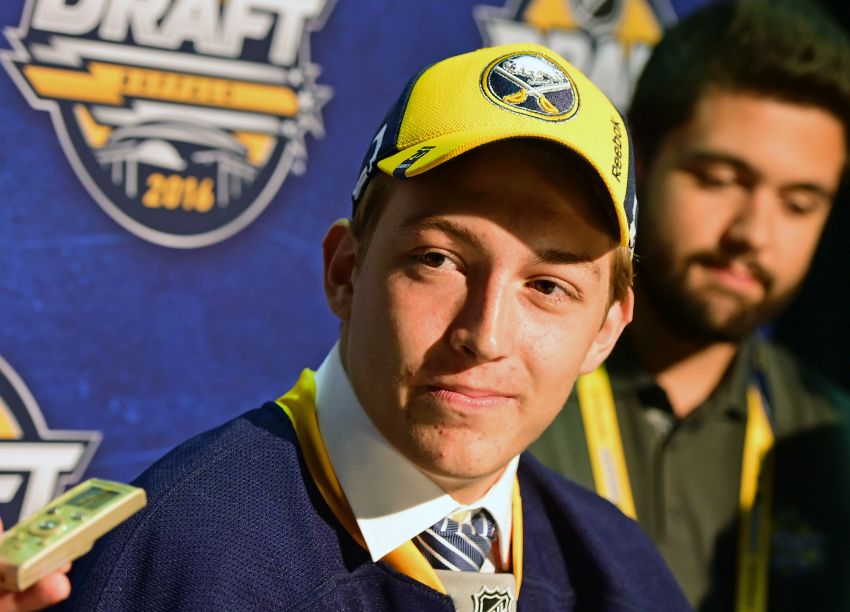 BUFFALO – By late Saturday morning, as the seven-round NHL Draft crept toward the end, East Aurora’s Austin Osmanski and his 50 or 60 supporters started getting nervous.

At one point, Osmanski, 18, joked to his father, Kevin, who was sitting beside him, they should leave. But deep down, the defenseman was really worried he wouldn’t be selected by anyone, let alone the hometown Sabres.

Osmanski responded to his aunt’s attempt to lighten the mood with a blank stare. When the final round started, Osmanski’s knee began shaking badly, said his mother, Jayne, who was also beside him.

Thoughts, meanwhile, raced through her head. She looked at her husband and wondered if it was a bad idea they had come the First Niagara Center. She started thinking about positive words to tell her son so he could leave the rink “with his head still hung high.”

“You’re at a loss for words,” Jayne Osmanski said. “I was starting to think, ‘What am I going to do here?’”

Luckily, she never needed to give a pep talk.

The Sabres had two final selections – picks 189 and 190 – in the seventh round. Austin Omanski closed his eyes for the first announcement. When Jayne Osmanski, heard “Mississauga,” his junior team, she shrieked.

Still, other players from the Ontario Hockey League team were available.

Austin Osmanski’s grandfather had tears in his eyes. His grandson held back his tears, partly because none of the other draft picks cried.

“I wish I could tell you what it feels like right now,” he said to the swarm of reporters and cameras. “Being here growing up, now wearing the jersey, it’s something I can never even think of.”

Osmanski wasn’t worried about where he was selected.

“I just wanted to be somewhere, be happy,” he said. “Obviously, Buffalo was a dream come true.”

When the Sabres drafted local players Justin Bailey and Sean Malone in 2013, Osmanski tweeted, with his name included, that “one day Buffalo is just going to have a team filled with Buffalo natives.”

Some friends reminded him of the tweet Saturday, and he scrolled back three years and found it. The words are now pinned at the top of his profile.

“I think my friends thought I was being stupid,” he said.

The Sabres are very familiar with Osmanski. He’s friends with general manager Tim Murray’s son, Jared. The two lift weights together at HarborCenter.

“I don’t know if that has anything to do with this or not,” Osmanski said.

“He does play major junior hockey,” he said.

Osmanski possesses a penchant for hitting but likes to go unnoticed by doing “stuff that people don’t want to do,” he said.

“I like to be a guy that’s obnoxious and remind you that I’m there,” Osmanski said. “But off the ice, I’m kind of just a low-key kind of guy.”

He added: “I think if you can (tick) off the other team, there’s nothing better than that.”

If Osmanski wants to make it to the NHL someday, he knows he must improve his skating.

“If I can figure out the skating part, I think I’ll be in pretty good shape,” he said.

Osmanski’s job now, he said, “is to be a sleeper pick.”

“Growing up, I’ve kind of been that guy that kind of sits under the covers and eventually finds his way to the top,” he said.

Nylander often stops over Osmanski’s billet family’s house for lunch after school. Before the draft, the Swede texted Osmanski and told him he wanted Buffalo to pick both of them.

“Great guy,” Osmanski said. “He’s probably one of the goofiest guys you’ll ever meet. … Obviously, (he’s) an exceptional player. I look forward to hopefully meeting up with him again in a few years in a Sabres sweater.”

Coach Dan Bylsma on the Sabres acquiring Harvard winger Jimmy Vesey’s rights last week for a third-round pick: “You salivate a little bit with the possibility of adding a top-six winger to your team.”

Murray said he spoke to Vesey on Friday and plans to talk to him again next week. The Sabres can’t sign the Hobey Baker Award winner until July 1. They have his rights until Aug. 15.

Nylander, 18, is eligible to play in the AHL with the Rochester Americans next season because he was loaned from his Swedish club to the OHL. Under normal circumstances, teenage players from the Canadian Hockey League can’t play in the minors.

He could also play in Sweden, meaning Sabres have four options – NHL, OHL AHL and Europe – for him in 2016-17.

One day Buffalo is just going to have a team filled with Buffalo natives! #bailey #malone #letsgetkane #maybekennedy #osmanski