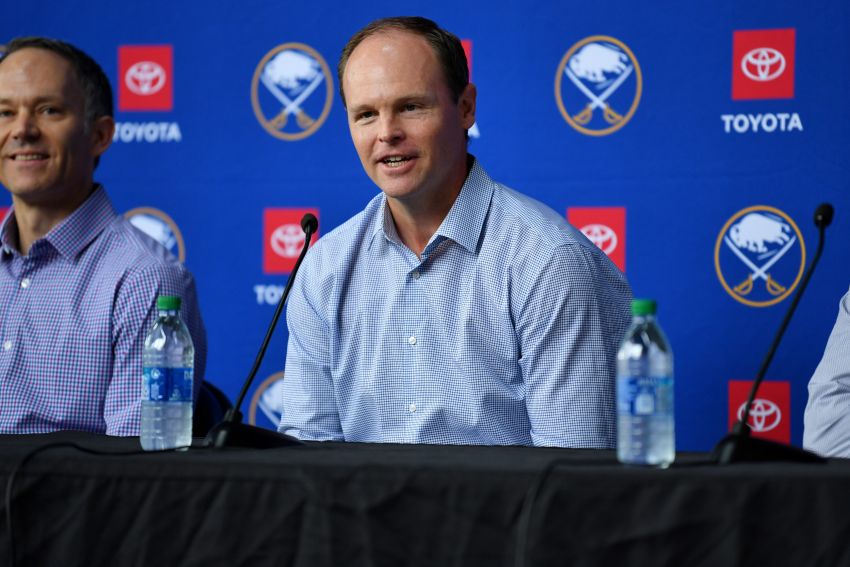 BUFFALO – Just after 8 tonight, the Sabres will add a potentially franchise-changing talent in defenseman Owen Power, winger William Eklund or one of the other special NHL Draft prospects available to be picked first overall.

But right now, the draft, a virtual event that starts with the first round tonight, almost feels secondary. The Sabres have hit a critical juncture during an offseason in which they could trade captain Jack Eichel, their biggest star, and some of their best players.

At 1 p.m. Thursday, the NHL’s roster freeze ended – for five days, teams could only deal with the expansion Seattle Kraken – opening the league up for business again. Free agency begins Wednesday.

In a few days, the Sabres’ roster could look radically different, with Eichel, center Sam Reinhart and defenseman Rasmus Ristolainen all gone.

“I’ve said to you guys over and over again, we’re willing to listen to every possible thing that’s going to get our franchise pointed in the right direction,” Sabres general manager Kevyn Adams said Thursday in the KeyBank Center pavilion. “That’s what we’ve continued to do.”

During the Sabres’ first in-person media availability in more than 16 months, Adams wanted to stick to draft-related topics, so he did not offer an update on Eichel’s neck injury or any specific players.

Still, Adams acknowledged based on his conversations “there (are) a lot of things happening around the league.”

“The expansion piece is interesting because a conversation that was happening before, the deadline hits, expansion plays out, now teams reset and some conversations that you were having are built upon,” Adams said. “Some conversations are new. I think there’s going to be certainly a busy couple of days here leading through Saturday and then as we get through free agency as we’re in this condensed time.

“I guess I’m not in a perfect thought process to predict, but I would assume it’s going to be busy for all teams.”

Trading the frustrated Eichel, who has endured a lot of losing in his six-year career, could be an arduous task. Yes, the center performed at an MVP level for much of the 2019-20 season and ranks among the NHL’s most dynamic players when he’s healthy. But Eichel, 24, hasn’t played since suffering a herniated disc in his neck March 7. His health is a major hurdle.

Eichel wants to undergo a surgery that has never been performed on a hockey player. On May 10, he said he felt a “disconnect” with the Sabres and he was a “bit upset about the way things have been handled.” He was also noncommittal about his future.

On May 12, Adams said the Sabres’ doctors did not want Eichel to have the surgery and that the team constantly communicated with the star’s camp.

But more than Eichel’s health complicates a deal. He carries a $10 million salary cap hit, so trying to fit him under a $81.5 million flat cap won’t be easy for teams.

The American also struggled last season, mustering only two goals and 18 points in 21 games as he battled rib and ankle problems.

The chances of the Sabres fetching an equal return in exchange for Eichel are slim.

“They’re trading him on a low, not a high,” said ex-NHL defenseman Carlo Colaiacovo, a TSN analyst who also co-hosts “First Up” on TSN 1050 radio in Toronto.

Sure, the Sabres might snag some high draft picks, top prospects or strong roster players. But they almost certainly won’t receive an asset capable of scoring 50 goals or 100 points like Eichel.

“I think it’ll determine the next three to five years and beyond for the Buffalo Sabres,” NHL Network analyst Brian Lawton, a former NHL GM, said of how the return for Eichel will impact the team. “Yeah, how important is that? As important a decision as you can make as a GM.”

Colaiacovo, who played 36 games for the Sabres in 2015-16, doesn’t see an Eichel trade materializing.

“One, Buffalo’s going to ask for a lot,” Colaiacovo said. “Two, are you going to get equal value for what he represents? I don’t see it. … And in a flat-cap world, how are you moving a $10 million salary?”

When Adams’ predecessor, Jason Botterill, traded Ryan O’Reilly to the St. Louis Blues in 2018, he only received a first-round pick and forwards Patrik Berglund, Vladimir Sobotka and Tage Thompson in exchange for one of the league’s top centers.

The meager return has helped keep the Sabres in the NHL’s basement.

While Thompson and defenseman Ryan Johnson, the college prospect the Sabres drafted 31st overall in 2019, could still pay dividends, the deal ranks as one of the worst in recent memory. Berglund quit the Sabres after playing only 23 games. Sobotka was downright awful in his first year in Buffalo before getting injured early in the next season.