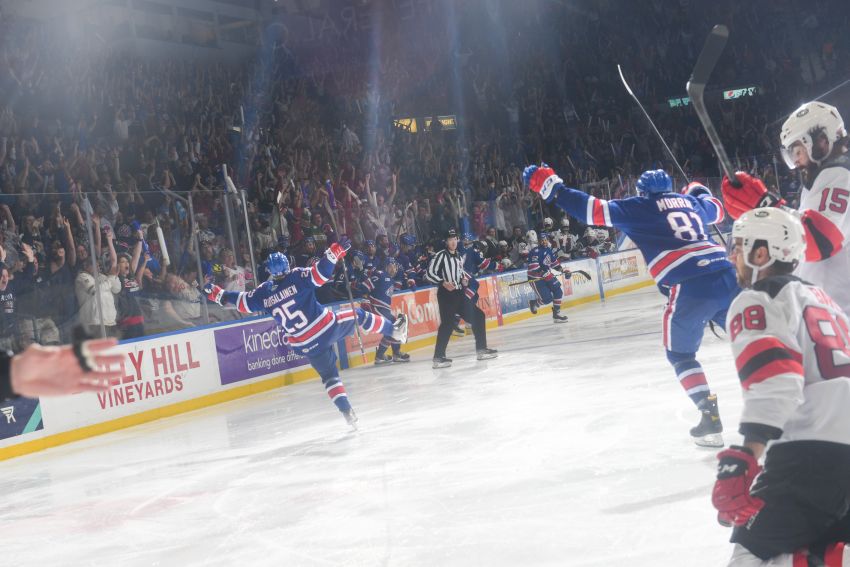 ROCHESTER – In his brief time playing with Peyton Krebs, winger Arttu Ruotsalainen has learned he must always be ready for the Americans center to adroitly feed him the puck anywhere on the ice.

“He’s an incredible player and he sees those passing lanes that others can’t see,” Ruotsalainen said Sunday after converting Krebs’ slick feed on the power play 1:39 into overtime, securing another wild 4-3 win and a 2-1 series lead against the Utica Comets. “Yeah, you just have to always be ready to shoot.”

Ruotsalainen, who misfired on the same power play in the waning seconds of regulation, joked he closed his eyes as he one-timed Krebs’ cross-ice pass in the right circle.

“Krebsy made an incredible pass through the PK players,” Ruotsalainen said following Game 3 of the best-of-five North Division semifinal in Blue Cross Arena.

Ruotsalainen’s sixth goal and ninth point of the AHL Calder Cup Playoffs capped another stirring Amerks win. Incredibly, all four of their triumphs this postseason have been 4-3 overtime victories.

“We don’t look at it as overtime, it’s just another period,” Amerks defenseman Casey Fitzgerald said.

Ruotsalainen said: “The whole thing is kind of feeling it like we have the chance to win the game (in overtime). We are trusting ourselves.”

The Buffalo Sabres’ affiliate, which won Saturday in Utica when winger JJ Peterka completed his hat trick in overtime, can eliminate the top-seeded Comets on Tuesday at home.

Remember, the Amerks’ play-in win over the Belleville Senators earlier this month was their first series victory since 2005. Now, they can win two in just two weeks.

Some other notes on Sunday’s game are below.

– Fresh off his three-goal performance, Peterka, 20, was possibly the best player on the ice again.

In the first period, the German rookie set up winger Lukas Rousek’s go-ahead goal by feeding him a nifty no-look pass in front at 16:45.

Then in the second period, Peterka set up winger Brandon Biro’s go-ahead score, finding him in front from the right circle at 15:22.

– Fitzgerald took a beating Sunday, getting hit in the face early before he leaving the game late in the second period when he fell and his knee buckled.

“I don’t think I’d ever lose Fitzy,” Appert said. “There’s no time I’ve ever been coaching Fitzy that I’ve ever seen him walk down the tunnel or have to talk to the trainer that I think he’s not going to be back. If it’s humanly possible to be back and he’s not held by the doctors, he’s going to be back because he is one tough young man.”

Fitzgerald said nothing was going to let him leave such a critical game.

“Unless my MCL was completely torn, I was definitely coming back,” Fitzgerald said.

“I was going to do whatever it took to get to that puck,” Malone said. “Great shot by Jimmy. I actually thought he was going to pass it.”

– Sunday’s raucous sellout of 10,741 fans was the largest crowd at Blue Cross Arena since Game 6 of the 2000 Calder Cup final.

“It was incredible,” Malone said. “That’d be great if every game was like that. … I couldn’t say enough about the support today, it was incredible. It was the loudest I’ve heard it here.”

Notes: Injured Amerks defenseman Mattias Samuelsson (ankle/foot) has missed all five playoff games. Defenseman Brandon Davidson, who returned for Saturday’s game, did not play Sunday because of the potential for a setback, Appert said. … Ruotsalainen scored with defenseman Robbie Russo in the penalty box for an illegal check to Amerks captain Michael Mersch’s head. Mersch left the game. Appert did not have and update on him. … The Amerks dressed 11 forwards and seven defensemen. … By the playoffs, AHL rosters are usually huge. The Amerks scratched 14 players on Sunday.