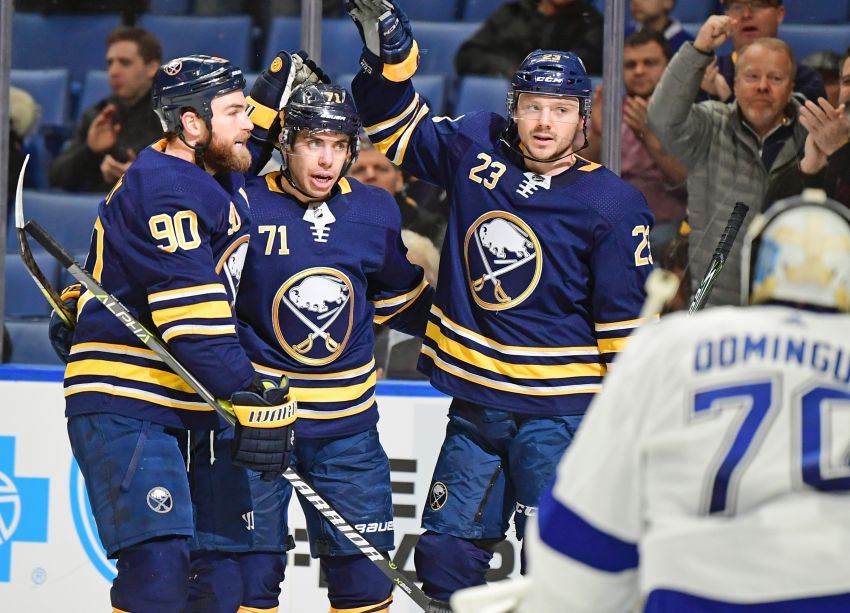 BUFFALO – In the oddest of Sabres seasons, try figuring this one out: since top center Jack Eichel hurt his ankle Saturday, the NHL’s second-worst team has beaten the league’s two best.

What the heck has changed without Eichel, who’s sidelined indefinitely? Remember, he accounted for 41.2 percent of the Sabres’ offense before suffering a high right ankle sprain early in Saturday’s 4-2 win in Boston.

“You can’t replace Jack, he generates so much offense,” said Sabres goalie Chad Johnson, who won his first home game this season and just his fourth overall. “I think it’s just guys maybe stepped up a little bit or maybe just kept it a little more simple.”

Clearly, some Sabres, most notably center Ryan O’Reilly, have taken it upon themselves to step up in Eichel’s absence. O’Reilly, the team’s best player in Sunday’s 5-4 loss to Colorado, has been scorching.

O’Reilly scored on the power play 3:41 into the third period, putting the Sabres up 4-2, and added two assists, giving him two goals and six points in the last two contests.

“The thing I like about his game is he’s really stepped up in all ways,” Sabres coach Phil Housley said. “Not only on the scoreboard, but in his own zone as well.”

Sam Reinhart, meanwhile, continued his torrid stretch, scoring on the power play before his empty-net goal sealed only the Sabres’ eighth home win. The third-year winger has compiled six goals and 16 points in the last 13 games.

The power play, which ranked last overall a month ago, has provided goals in 12 of the last 16 games. Don’t forget, the Sabres owned the NHL’s No. 1 power play last season.

“I feel it took us a while to find that, but we’re confident with each other now,” O’Reilly said. “It just starts with our compete. When we’re working hard and having the extra guy on the ice, things start to open up. That’s the mentality we have to stick with.”

The announced crowd of 16,530 – it looked closer to 11,000 – responded by roaring in approval, one of the handful of times this season the fans inside KeyBank Center have gotten noisy.

“The key moments, whether it’s guys blocking shots or killing a five-on-three, it’s that momentum, it’s that energy we’re gaining from the fans and we’re giving them something to cheer about on our side,” Johnson said. “So when we do kill it, we turn around and use it as momentum for us.”

Winger Scott Wilson, who scored the Sabres’ third goal, said: “(We have) guys stepping up throughout the lineup. … A blocked shot like Scandy did early. … it probably saved a goal. Little things like that build up. I think everybody kind of feeds off of it.”

The Sabres have fed off Saturday’s win against the Bruins, a victory Wilson said “gave us a little confidence, which we’ve clearly been lacking for a little while.”

You figured the Sabres would’ve started No. 1 goalie Robin Lehner against the potent Lightning, which lost a 4-3 track meet Monday in Toronto.

“It feels really good,” said Johnson, who made 26 saves, outdueling counterpart Louis Domingue. “For me, my history, I’ve always usually had a pretty good home record.”

Fourth-liner Nick Baptiste, just up from the minors, tallied the other goal, opening the scoring.