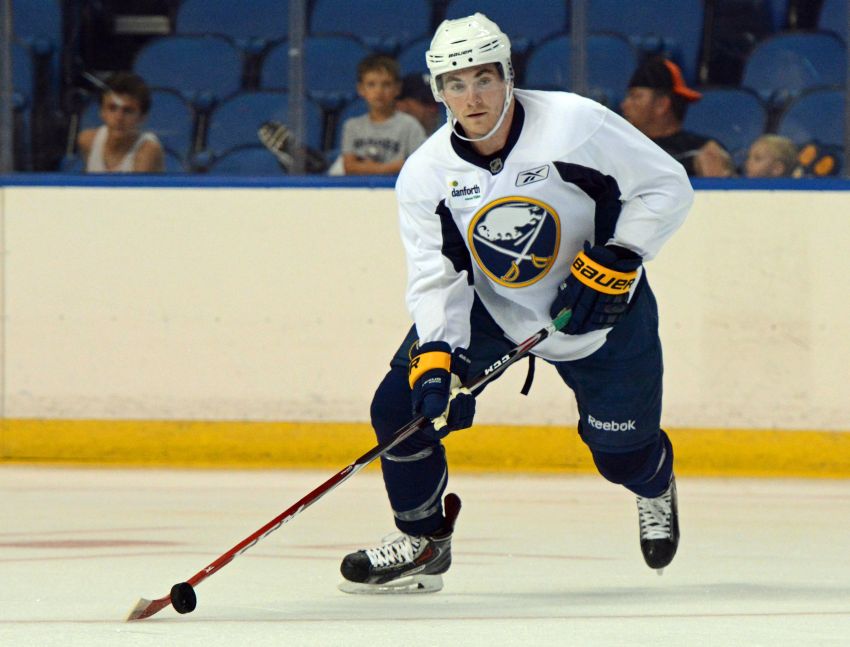 BUFFALO – Sabres prospect Anthony Florentino can relax a bit this week. The defenseman only has to defend slick center Jack Eichel during development camp drills and possibly a scrimmage.

“Defending him, he’s definitely the hardest player I’ve played against in my life,” Florentino said Wednesday inside the First Niagara Center.

Right now, Florentino has bragging rights. But he hasn’t mentioned the game to Eichel or winger Evan Rodrigues, another BU star the Sabres signed. He hopes it never comes up.

“They have nothing to hang their heads about,” Florentino said.

The 20-year-old Florentino, the 143rd pick in 2013, just experienced a magical season in which he cemented his status as an NHL prospect and won a title in his hometown, Boston.

“Stepping on the ice the first time with everybody and the lights off, it was one of the best feelings I’ve had,” Florentino said.

About 10 minutes into the contest, Florentino opened the scoring, just his third goal in 40 games.

“It was kind of just a blur after it went in,” he said.

“He does everything well,” Leaman said. “He’s a pretty good skater. I think he has pretty good mobility. He’s got a heavy shot as far as his one-timer’s concerned. He’s really got a thick frame to him.”

That frame has slimmed down since the Sabres drafted Florentino two years ago. Better nutritional habits have helped him drop 28 pounds. Still, he possesses a strong penchant for hitting, something he developed growing up with three older brothers. One of them, Rob, played 18 games last season with the Elmira Jackals, the Sabres’ ECHL affiliate.

“It’s the easiest thing for me to do … just run into people,” Florentino said about hitting. “That’s my biggest aspect for my game, my biggest strength. I’ve got three older brothers. We’ve always been getting hit. I’m always a little bigger than most guys. It just makes it easier for me and creates an element for the forwards, just being physical down low.”

Florentino will showcase his physicality at any moment. He fought 6-foot-4 center Justin Kea a year ago during Buffalo’s development camp scrimmage, the only scrap in recent memory at the annual game.

Some observers thought Florentino fought for the sake of it.

“We went down a third goal, the team needed a little spark,” he said. “I can play that role, and although it’s a development camp, you’re supposed to show what you do best. Being a physical guy and not afraid to fight, I’m willing to do whatever it takes for the team. It’s just something I had to do.”

Whatever it takes to win, Leaman said, “that’s the role (Florentino’s) going to play that night.”

If Florentino enjoys another strong season, the Sabres might want him to turn pro. Just a year ago, the Sabres had a surfeit of young defensemen in the organization. But that depth has been whittled away. Most of their top young defenders are already in the NHL.

Florentino wouldn’t speculate on his future, however. He’s happy with his college teammates, a group he believes is a “brotherhood.”

“I’ve never had a connection that I still have with everybody,” he said. “When people say family and brothers, there’s a lot of teams that say that about one another. There’s guys (with Providence) that just bonded together in a different way.”