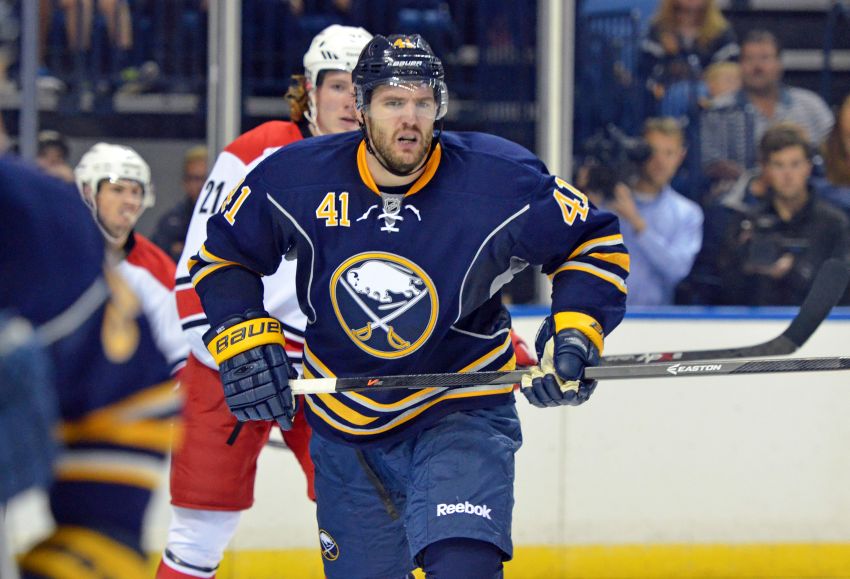 Meszaros had just skated a whopping 29 minutes, 39 seconds in Tuesday’s 2-0 win against Carolina. The minutes felt like a warm welcome.

Meszaros, 28, hadn’t played that much in a 60-minute game since May 6, 2011. Back then, the Slovak had just been named Philadelphia’s top defenseman.

Then injuries – back, shoulder, torn Achilles – stymied his career. His ice time has dipped below 20 minutes the last three seasons. At times, he has become a spare part.

The rebuilding Sabres, who needed to add money and experience, signed Meszaros to a one-year, $4.125 million contract July 1.

“This is a new chapter for me, a new home,” Meszaros said. “I’m going to start fresh.”

Meszaros stayed healthy last season, but new Flyers coach Craig Berube scratched him a whopping 24 times. He sat nine straight games in November. He hardly played following his March 5 trade to Boston. The Bruins scratched him seven times during the regular season and eight times in the playoffs.

“It was a tough year for me,” Meszaros said. “I didn’t play as many games as I wanted. Obviously, you want to play every game. … That’s my goal, stay healthy and everything will come.”

“He’s going to get an opportunity to play some nice, big minutes for us,” Nolan said. “So (Tuesday) was a good first step to get him really comfortable in our organization.”

Sabres general manager Tim Murray knows Meszaros from their time together in Ottawa.

What was Murray’s message to Meszaros?

“Just prove to everybody I can play good hockey again like I did in Ottawa and play a lot of minutes,” he said.

Meszaros was one of the NHL’s best young defensemen not long ago, averaging 37 points in his first three seasons for some powerhouse Ottawa teams.

Having played the Sabres 63 times in his career, Meszaros knows his new team well. He sounded nostalgic recalling all those wild post-lockout battles between the Sabres and Senators.

He played in the infamous 2007 brawl game in which goalies Martin Biron and Ray Emery fought after Chris Neil concussed Chris Drury. He was on ice months later when Daniel Alfredsson’s overtime goal punched the Senators’ ticket to the Stanley Cup final.

“It was fun times,” he said. “It was great that rivalry became like that.”

Meszaros wants to prove he still possesses the same slick style he showcased in Ottawa.

“I didn’t have any injury issues last year, so that was great,” he said. “I was healthy. Obviously, I didn’t play that good, like I wanted. … I want to prove to myself and everybody those days in Ottawa weren’t just (limited to) Ottawa.”

Mikhail Grigorenko continued a strong push to make Buffalo’s roster, scoring his first preseason goal by batting Cody Hodgson’s pass out of the air and beat the goalie as he zoomed to the net.

“It was a tremendous pass, backhand sauce, I don’t know how he made it,” Grigorenko said. “I just caught it.”

“I didn’t do know what do,” the center said. “It was just the only move I was thinking about. I was a little nervous, because if you don’t score those ones, it’s embarrassing.”

He added: “I had a lot of confidence in that move.”

Grigorenko skated 24 minutes, 56 seconds, the most of any Buffalo forward. The Grigorenko, Hodgson and Chris Stewart trio faced the Leafs’ top line all night.

“He did the right things summer by working himself in better shape,” Nolan said about Grigorenko. “He came to camp with a real positive attitude, willing to earn things versus being given things, and he’s had a tremendous attitude from the get-go.”

Nick Deslauriers scored Buffalo’s other goal. The Leafs, who played several stars, roared back from a 2-0 deficit against a Sabres team featuring many youngsters and AHL players.

Sabres goalie Andrey Makarov looked sharp while making 27 saves. The Russian will likely be sent to Rochester this week, however.

The Sabres rested center Sam Reinhart, the No. 2 pick in June, for the first time this preseason.