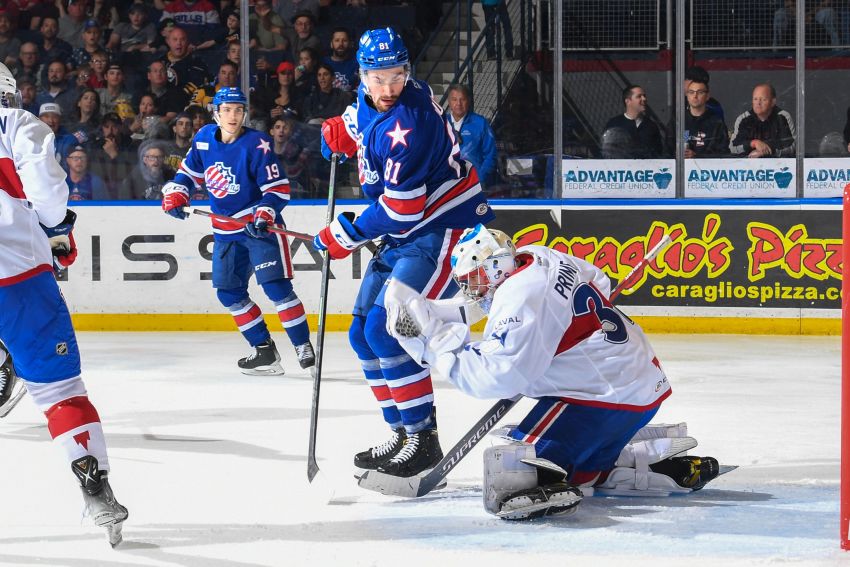 ROCHESTER – The Americans battled adversity and beat long odds for weeks, eking into the Calder Cup Playoffs on the last day of the regular season before beginning their deepest and most memorable postseason run in 18 years.

They rallied to win games, earned four overtime victories and triumphed in a do-or-die Game 5 against a top seed.

So when the Amerks dropped the first two games on the road against the Laval Rocket in the best-of-five AHL North Division final, it hardly felt like they were out of the series. When they blew an early 2-0 lead Wednesday, allowing four goals in a stretch of just under four minutes late in the second period, it never felt they were out of the contest.

Sure enough, the Amerks roared back in Game 3, scoring three third-period goals in a span of 8:22 to regain the lead and whip the raucous capacity crowd of 10,662 fans into a frenzy at Blue Cross Arena.

Still, it wasn’t enough, as the Rocket tied it late in regulation before Jean-Sebastien Dea’s power-play goal 1:51 into the third overtime clinched a 6-5 win and a series sweep.

“I said to the group I’m certainly disappointed in the loss, but I’m probably more choked up and disappointed I won’t get to coach this group again,” Amerks coach Seth Appert said following the 4 hour, 33-minute game. “This is a great group that went through so much so much adversity, never gave up on each other. I’m probably more disappointed that this particular group of men will never get to be a team again.”

Amerks winger Brett Murray, who scored twice, said: “This is an extremely special group. I’m just happy to be a part of it.”

Appert said the delay of game penalty Amerks defenseman Brandon Davidson received prior to Dea’s goal “was the wrong call.”

The Rocket answered the Amerks’ comeback when Jesse Ylonen’s six-on-four power-play goal 18:53 into the third period tied it at 5. Amerks center Mark Jankowski missed a yawning net and a chance to seal the game shortly before Ylonen scored.

Murray, whose goal 13 seconds into the third period ignited the rally, scored the go-ahead goal at 8:35. Winger JJ Peterka’s second goal of the night tied the game at 1:32.

“Tonight was fitting, down 4-2 in the third, no quit, put ourselves in position, we probably should’ve closed that out,” Appert said.

Amerks defenseman Ethan Prow said: “We never went away, we always battled for each other, and tonight was no different. So it’s always a tough pill to swallow. There’s no easy way to put it. Obviously, this group will never be together again and never be the same. So cherish those moments.”

The Amerks finally broke through offensively early in the game, scoring twice on goalie Cayden Primeau, who gave them fits early in the series.

Jankowski scored on the Amerks’ first shot 1:04 into the game, capitalizing on an odd bounce into the slot. When Peterka’s power-play goal made it 2-0 at 8:05, the Amerks equaled their offensive output from the first two contests.

They had just three shots on goal.

The Amerks started frittering away the lead when Laval winger Brandon Gignac scored 13:52 into the second period. Danick Martel tied it at 14:47 and Xavier Oullet put the Rocket up at 16:03. Dea, who played for the Amerks and Buffalo Sabres the last two years, gave the Rocket a two-goal lead at 17:48.

Amerks winger Linus Weissbach and captain Michael Mersch, both of whom suffered upper-body injuries earlier in the postseason, participated in Wednesday’s morning skate but did not play.

Weissbach, out since the opener May 10, went through the entire session. Meanwhile, Mersch, out since May 15, joined the skate late and did light work.

Appert said following the game they hoped Mersch could play but he did not clear protocol in the afternoon.

The Amerks dressed 11 forwards and seven defensemen for the eighth straight game.